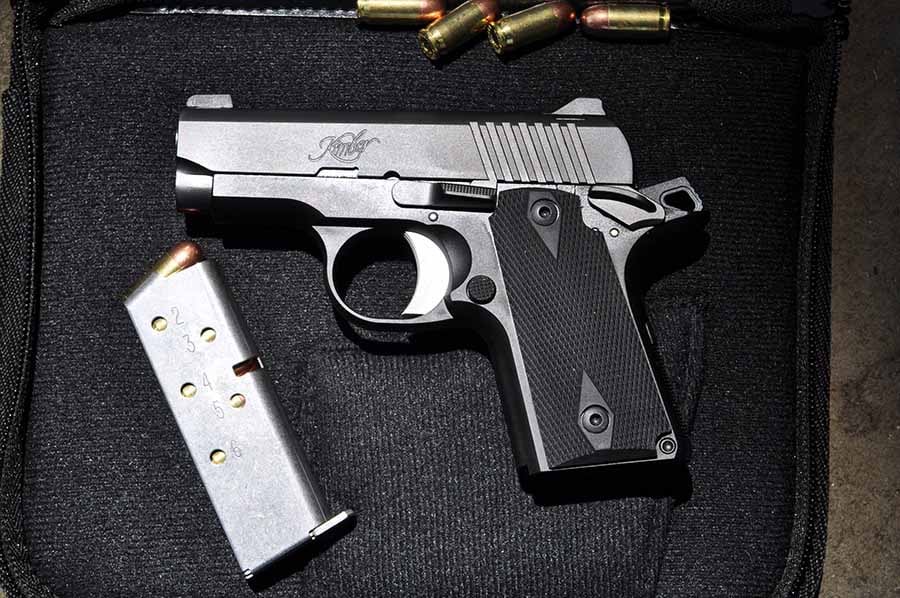 Kimber has a tremendous following, and fans were clamoring for a release date. While the original release date was a few months back, these baby 1911s are now starting to appear in gun stores across the country.

When announced, the Kimber Micro Carry tweaked my attention and I was hoping to get my hands on one ASAP. Unfortunately, due to recent political events, manufacturers were focusing their production attention on their core products during the past two years, making this little baby impossible to find.  I can tell you though, it was worth the wait!

I got the chance to run a couple of hundred rounds through the Micro a few months ago at a try-and-buy event. Shooting Kimber’s high end, two-tone Custom Shop CDP model with rosewood Crimson Trace laser grips and tritium night sights, left me seriously impressed with the little gun’s accuracy and pointability.

Considering its short two and three-quarter inch barrel and slightly-longer sight radius, this little .380 ACP pistol effortlessly pelted the 12-inch steel plate 18 yards down range.  At this distance it almost became boringly easy, allowing me to make fast double tap hits and fast six shot strings; going six for six  nearly as fast as I could pull the trigger.

A big part of this gun’s accuracy results from its crisp, single action trigger. A feature synonymous with Kimber’s full-sized 1911, but welcome surprise on a ultra-compact carry piece. To attain the type of accuracy expected from a full size handgun in a pocket gun is truly impressive, and speaks to Kimber’s raison d’etre for attention to detail and quality. 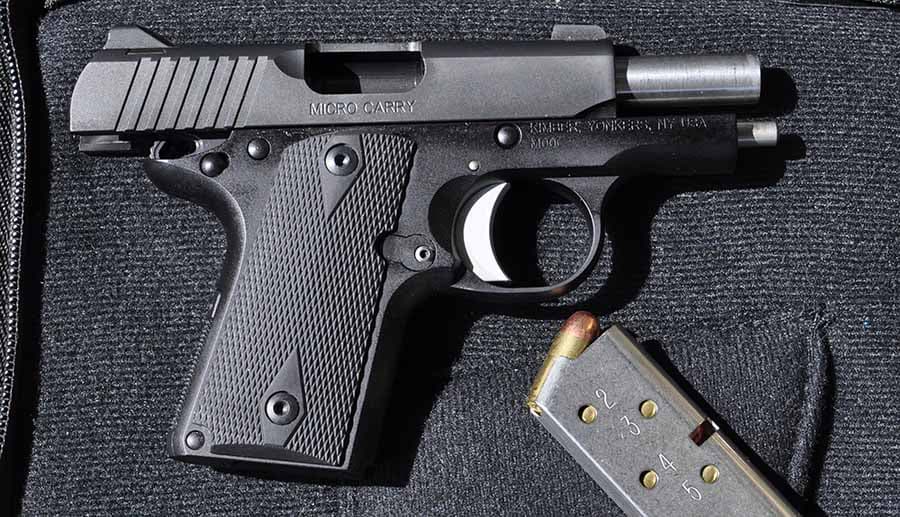 The Kimber Micro Carry isn’t just accurate, it’s also flawlessly reliable; suffering no failures whatsoever. This is especially impressive when you consider this little piece must have digested at least 800 rounds throughout the day. Reliability is vital with any carry gun, but delivering on accuracy as well demonstrates that Kimber is serious about taking on the pocket gun market in a big way.

After the try-and-buy event, I was hooked! I had to have one, so I ordered a Micro and had the joy of collecting it from my local dealer the following week. I chose their all black base model of the Micro Carry. It ships with a matte-black aluminum frame, topped with an ionbond diamond-like carbon (DLC) coated, steel slide, fitted with a stainless barrel.

As every gunny knows, there’s nothing like the anticipation of going to pick up a new gun and un-boxing it for the first time; the Kimber’s packaging doesn’t disappoint.  Boxed in a crisp black cardboard box the pistol comes protected by a durable zippered Denier case with an internal mag pouch that holds one magazine.  A user manual and a cable lock are also included.  The gun came with one six round magazine, seven-rounders for those who like to have a pinky extension, and want the extra capacity, are also available.

Along with the gun I ordered a DeSantis carry holster. Kimber has paired up with this holster maker to offer three different versions for the Micro, which are available through Kimber’s webstore. 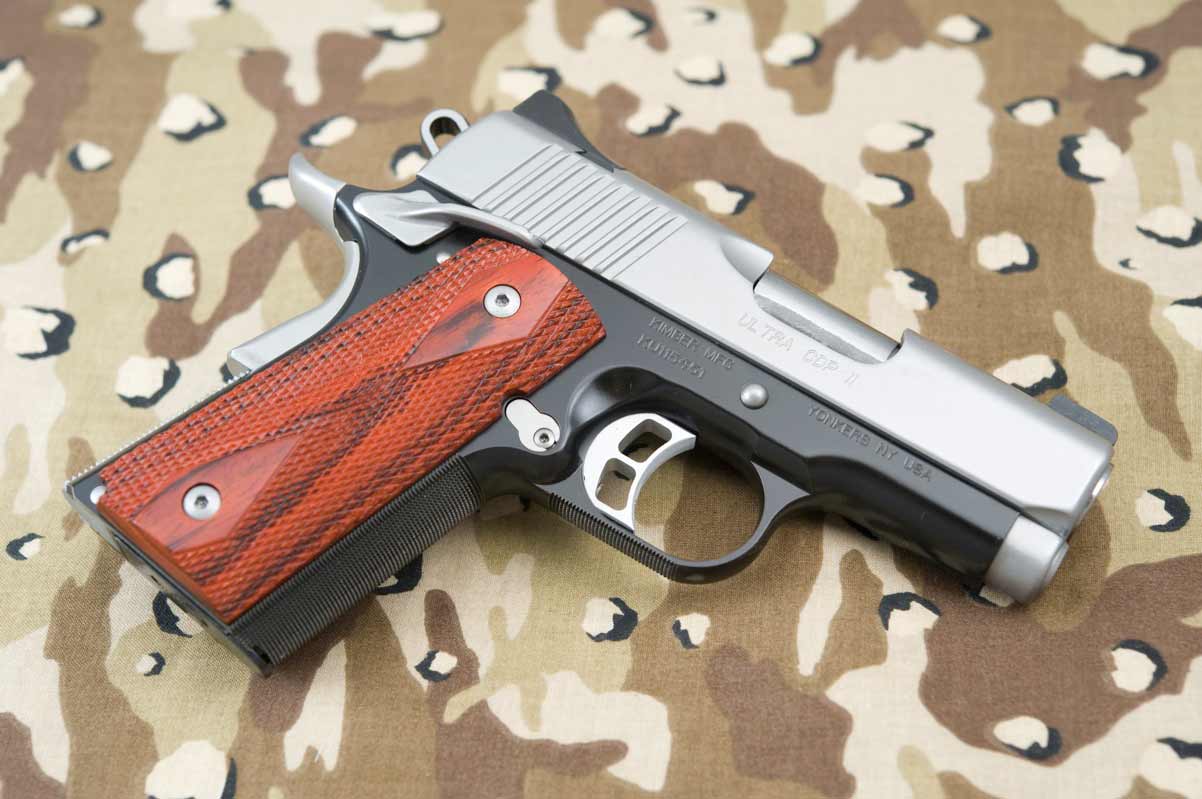 In terms of disassembly, the Micro being a mini 1911 comes apart in the same way, making it a breeze to clean and oil. The only difference is when reassembling, users have to remember to push the ejector on the back of the frame down below the slide in order to align the slide back onto the rails.

A carry gun needs to be reliable, easy to shoot and safe to carry, and the Kimber delivers on all these fronts. In terms of safeties, the gun has a firing pin safety block, which prevents the pin from striking a round’s primer until the trigger is pulled.

The Micro Carry also features a traditional  1911 thumb safety that allows the gun to be carried, cocked and locked for those who like to carry in condition one. The only difference between the Micro’s thumb safety and the kind found on conventional 1911 pistols is that it doesn’t lock the slide in place. The advantage of this is that it allows shooters to clear the gun with the safety on. I’ve always been a big fan of the .45 ACP, subscribing to the theory, bigger is better. However, with the advent of improved, defensive .380 ACP ammunition, the round is coming of age.  Anyone used to the function and controls of a 1911, looking for something light weight (the Micro weighs just 13.4 ounces) and concealable, will be impressed with the Micro, as it makes for an easy and familiar transition.

The Micro is a great, high-quality pocket pistol and as such, isn’t cheap. The base model I bought retails for $651, while their top-shelf Custom Shop version, the CDP (LG) with Crimson Trace laser grips and night sights retails for $1406. The two other models, the all stainless and the non laser gripped CDP version, priced in between.

While competing designs like the Colt Mustang  and the SIG P238, in my view, Kimber’s Micro Carry is possibly the finest pocket pistol on the market today.