The Evolution of the M4: Knights Armament SR-15 (VIDEO)

The Knights Armament SR-15 is essentially the evolution of the M4 platform. Knights Armament Company has really gone the extra mile on this rifle loading it will excellent features and accessories while keeping the rifle surprisingly lightweight and affordable.

On the outside it is hard to see any difference between an SR-15 and any other AR variant but closer inspection reveals features that set this gun apart.

The charging handle is a Lewis and Machine Tool Tactical with extended latch; although I replaced this with a Bravo Company USA gunfighter, the LMT did a good job and offered more surface to rack the bolt. I would say that it has a similar profile to the PRI gasbuster latch. The bolt carrier is properly staked and an auto carrier. KAC’s E3 bolt has an enlarged dual spring extractor and larger lugs that are chamfered not square and a thicker cam pin. The E3 is a beefy bolt and I would imagine that it would have a longer service life then a standard one.

The barrel is a 16-inch Knights Armament cold hammer forged from what I can gather in a lightweight profile. Hammer forging is supposed to create a more durable and wear resistant barrel then button rifling due to less stress being put on the steel during the manufacturing process.

I used to avoid lightweight barrels because I hit the gym a lot and didn’t care about a few ounces if it made the barrel more rigid and inherently accurate, but my opinion has changed. Most of the shooting I do is 200 meters and in on 2/3 IPSC steel silhouettes or cardboard targets. For this kind of shooting with this kind of rifle I have noticed zero change in my ability to hit these man sized targets with a lightweight barrel. The muzzle device is just a standard A2 flash hider, which I see as a wise choice for KAC because there are so many aftermarket options that it would probably be replaced anyway. The A2 is a decent flash hider, but I wanted to keep my rifle a bit flatter when shooting fast strings, so I installed a Battlecomp 1.0. These compensators do an excellent job of keeping the gun in the A zone with mildly more blast then the A2. 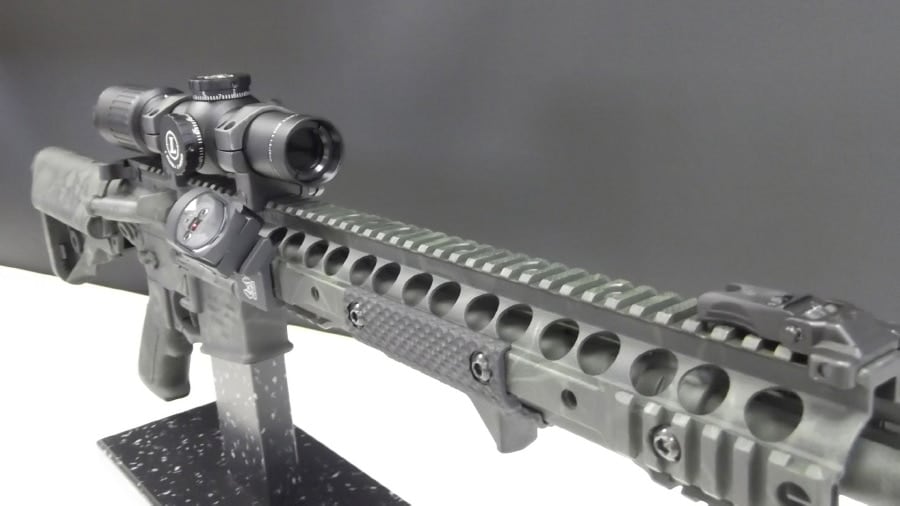 What I find is the really special feature on the barrel is the gas system. The low profile gas block is double pinned to the barrel and sits far forward in what I have seen referred to as a “longer then midlength” or “battle rifle” gas tube. This tube length is about an inch longer then mid and reduces gas pressure going back to the bolt carrier group, the difference in “smoothness” may be slight when compared to a midlength gas system, but compared to an M4 it is night and day.  The M16 was originally designed to operate with a 20-inch barrel, rifle gas system, and rifle buffer. Anything you can do to bring a carbine closer to that combination will help the rifle function more like the original design. Also, with the gun operating less violently parts will be put under less stress and last longer, which is a good thing because your E3 bolt is proprietary and retails for $350.

The lower receiver is completely ambidextrous, it includes an ambi safety and bolt release that is however is not a bolt catch. This may not be a big deal for some people especially if their work gun is a standard configuration and they do not want to break up their muscle memory, but it is a good thing for lefties and a nice touch at least.

The rifle ships with a knights Armament two-stage match trigger that breaks at about 4.5 pounds. The trigger breaks clean, but I do wish it were about a pound lighter. I also prefer a single-stage so I put the KAC trigger on a different gun I have set up for a more long-range role and went with the Geissle SD3G trigger. The standard trigger guard is replaced with the Knights enhanced trigger guard, which is similar to what Magpul offers but in aluminum.

Also there are QD swivel mounting points all over the rifle. Two on the stock, on the lower behind the safety, right in front of the upper receiver, at the end of the rail and one on the bottom of the rail as well. The QD sockets on the lower itself are positioned close to the safety and I found not well placed for me unfortunately. The other complaint I have is not a single one of them is limited rotation so slings can get tangled.  Stock wise you could not ask for anything better. On the end of the receiver extension rides an LMT SOPMOD. This stock offers a flared cheek piece giving the shooter a quick and natural chipmunk cheek and the rubber buttpad sticks well to clothing and tactical nylon when they shoulder the weapon. I also prefer the zero-degree pitch which coupled with is good for barrel chested war fighters and good purchase against plates. Inside the cheek piece on both sides are waterproof battery compartment tubes.

This rifle comes with arguably the best Back Up Iron Sights on the market. The micro 600 rear, and micro front flip sights. What separates these from many other high quality offerings? The micro 600 is range and windage adjustable whereas most BUIS are only windage adjustable. The front sight is very low profile and includes a smaller than normal front sight post. It is also adjustable without tools! These irons are exceptional and lend themselves to accuracy, however for me there are some things I do not like.

The URX 3.1 has officially become my absolute hand guard to this point. It has a 13.5-inch length that gives you more than enough room to extend your hand far out and still have room to mount lights, lasers, bottle openers or whatever. The top rail spans the entire length of the rail while the side and bottom rails have about 2-inch sections at the base and ends of the hand guard. Knights supplies their grip panels and hand stop panel to get an excellent grip. They feel like 1911 G10 grips. There are also after market Picatinny sections available if you prefer a vertical grip. I have shot slick style rails before like the Troy TRX extreme and was curious to see how many rounds it would take before gloves were a sound choice but was surprised to find that over the course of an hour shooting 450 rounds with many cadences of rapid round dispensing that the hand guard never got too uncomfortable to the bare hand. I am guessing that a combination of the lightweight barrel, ample space and venting holes around it, and the heat shield all contributed to the hand guard staying relatively cool.

The only changes I would like to see in future versions are LIMITED rotation QD sockets, ditching the bottom sections of rail completely, and including a Picatinny section with the grip panel kit. Another note, it appears that when they install the rail they use thread locking compound on all of the bolts so taking off the bottom portion even to get to the barrel will be a chore and pulling the barrel requires an expensive proprietary barrel nut wrench.

Having shot many different brands and configurations of AR-15s and coming to the 2000-round mark on this SR-15 I am able to say that because of the high quality features and well thought out design that this has become my favorite black gun. 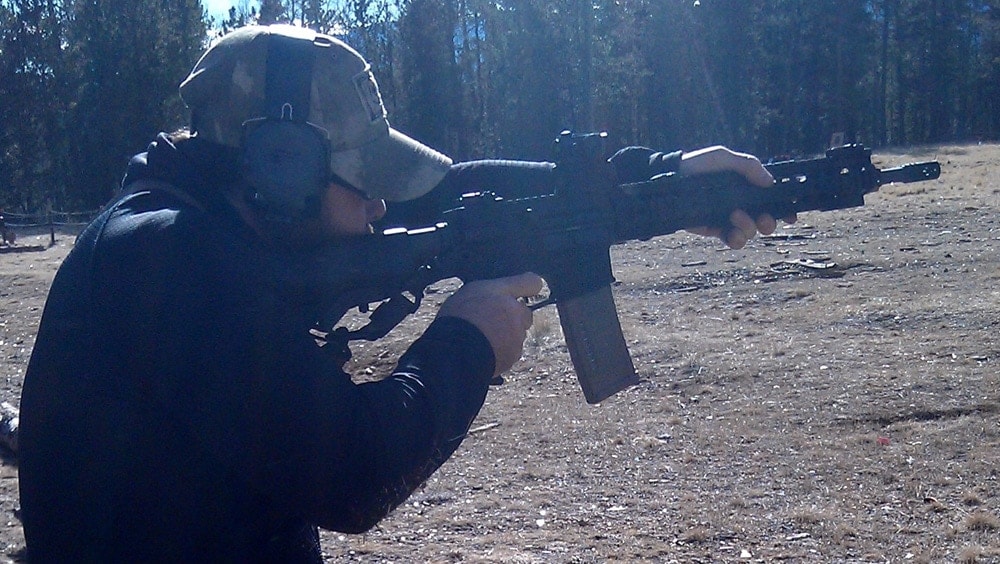 I am impressed that unloaded with an Aimpoint T1 in a Larue 660 mount and surefire scout light that it weighs 7.2 pounds. The SR-15 Mod 1 is not perfect, but most of my criticisms are subjective. With an MSRP of $2299.99 this gun seems expensive but if you add up the cost of parts it quickly becomes reasonable. There may be a few proprietary parts but overall I believe that this is one of the best overall rifles that money can buy.