If you’re anything like me experienced the dreaded buyer’s remorse of not buying exactly what you want — mostly because you couldn’t justify the cost. My first AK rifle was a WASR with canted sights and a trigger that slapped harder than a nun’s ruler. I was going to buy a used Norinco, but it was $250 more than the WASR and being a starving college student, that was more money than I could spare.

The quality difference between the two was far more substantial than I realized. The WASR was my first AK and I didn’t have enough experience to realize that the sights weren’t straight. I just thought AKs were not accurate, which is what any AR guy would tell me at least. After a few shooting trips I traded the WASR for a well-loved 1911, believing that AKs weren’t for me. Later in life, I fired a friend’s Norinco AK and the difference was astounding. I was immediately hit by that sinking feeling of, “I should have spent a little more money to get what I really wanted.”

I experienced this again much later in life when I bought an Arsenal SGL-21. Don’t get me wrong, it was a fantastic gun, but I regret not getting a folding stock, which was $250 more and I didn’t have the capital available at the time. Initially, I wasn’t worried. I believed that, like an AR, I could put whatever stock I wanted on it. Surprisingly, AKs require a special rear trunnion to install a Russian folding stock. I had all but given up on installing a side-folder until I came across a small company called Manticore Arms. 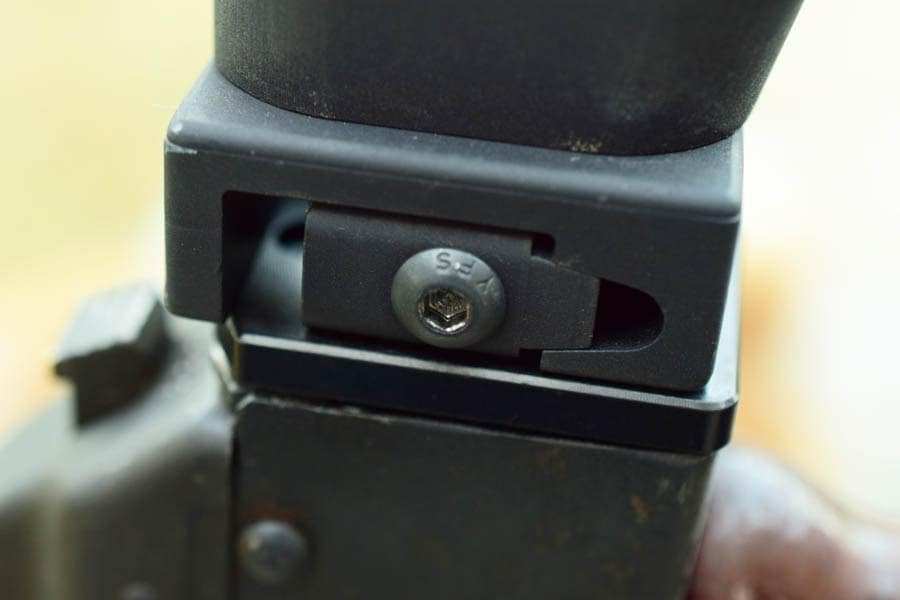 They offer an aluminum triangle stock, installed with the use of an ACE folding adapter to an AK rifle designed for a fixed stock. This means that you don’t have to sell your old rifle or pay a gunsmith to have this thing installed.

I will do anything for the readers of Guns.com and I really wanted to test my hand with an angle grinder, so I implored Century to send me one of their less desirable WASR rifles. They benevolently agreed and sent me an SAR-1 with some light rust and sights more crooked than a politician. With the assistance of my neighbor, his vice and an angle grinder I removed and evened out the tang. My newly acquired AK now had a flat back and was ready for installation.

Before I installed the folding mechanism I had an important decision to make: left or right? The Manticore Arms stock is reversible, which merits a word of caution: it is very possible, during installation as a right-folding stock, to impede the bolt if you mount it too high. In my case, it was just a little too high and resulted in nicking the stock and charging handle.

To unlock the folding mechanism you depress the entire stock down, freeing it from a locking joint integral to the hinge. The join is incredibly robust and the spring mechanism equally so. At first I found it difficult to unlock, but with practice it became second nature.

The Manticore Arms stock is heavy and overbuilt. So much so that a desert-island stranded rifleman could use the stock to open coconuts for both Wilson and himself for decades without the thing quitting. The downside of its durability is the added weight of the stock. Not enough to make the gun unwielding by itself, but if you tack on a rail, fore grip, light, laser and scope you might as well be hauling around an M249 SAW.

It would also work excellently on a converted Saiga-12 shotgun, though the all metal construction might be punishing when firing full-power loads.

The Manticore Triangle stock runs around 100 bucks by itself and requires a folding mechanism that also costs $100. This might seem expensive, but it’s a bargain compared to the cost of having a smith install correct Russian rear trunnion, buying the trunnion and stock and paying for the rifle to be refinished afterwards.