You know, it’s weird to not like a nearly perfect gun like the Korth Combat Revolver. Really. I wonder about myself. Am I just dissing it because that makes me look cool? Is it a case of ‘sour grapes’ over a gun I could never afford to buy? What’s the deal?

I dunno, but I couldn’t warm up to the Korth Combat Revolver in .357 Magnum, an almost legendary German handgun. 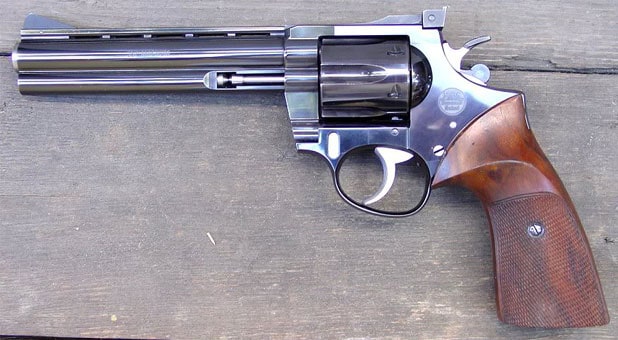 I should like this gun. It is phenomenally well made. Everything about it is meant to be perfect. And it isn’t just a matter of exquisite fit and finish. No, the thing is made – completely – out of hardened tool steel, which will last through tens of thousands of full-house magnum rounds without significant wear.

Seriously. You could buy one of these guns, use it heavily through your entire life, and then hand it on to your kid in damned near as good a condition as the day you took it out of the box. This isn’t just quality; this is lasting quality. Enduring quality. Almost pretentious quality.

And I guess that’s why I have a hard time liking this gun. We were joking about it when we were using one with a six-inch (actually, 5.875-inches) barrel for the BallisticsByTheInch.com tests, saying that one of the options on the gun was to have a servant (who came with the gun) load, unload, and clean the thing for you. It honestly made me nervous to handle the damned thing, like I was caught pretending I was something I’m not (that is, wealthy).

But the Korth Combat Revolver really is something different. Something exceptional.

The design of the revolver makes it look a bit like a Colt Python. But the internals are much stronger than a Python could ever hope to be. And the tolerances are extremely fine.

The cylinder gap is spec’ed at 0.003 inches (industry standard is more like 0.007 inches). Yet, the cylinder is designed to pop out, either for cleaning or for change to accommodate a different cartridge (such as 9mm Luger or 9x21mm). Yeah – there’s a little lever, and the thing just pops out. Yet, it pops back into position with a minimal cylinder gap. 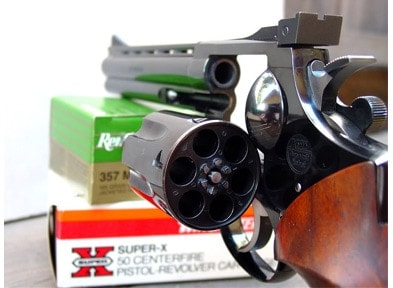 This was probably a factor in how well the Korth performed in our tests. It did significantly better (in terms of higher bullet velocity) across the board over my six-inch Python, and as well or better than the Smith & Wesson Model 627 with a 5.625-inch barrel.

Shooting the Korth was – OK. I found the trigger to be harder than I would have expected in double action. Oh, it is completely adjustable, but since it wasn’t mine I wasn’t going to mess with it.

In single action it was fine. Of course, it felt like glass – wet glass – in terms of how smooth it was. And when it broke it was crisp and clean.

Recoil was fine, even when shooting full-house magnum loads. Partly this was due to the grip design (similar to the custom grips I have on my Python), which made it easy to hold onto the gun solidly, even with my large hands. Partly it was due to the solidness of the gun.

Accuracy? Well, as good as I am. Probably a hell of a lot better, to be honest. The Korth Combat Magnum isn’t designed to be a target gun, and isn’t the first choice for those who are looking for a target gun for high-end competition. But even though this is a “Combat” model, it has fully adjustable/replaceable sights that were quite good.

The fit and finish really is something to behold, and the model we were using was towards the bottom of their model line, with just a highly polished deep-blue finish (as opposed to plasma or engraved finishes) and lovely walnut grips (ivory and exotic woods are optional). Some of the fittings and exposed pins are chrome, to provide a nice accent. Yeah, when you pick up the gun, it very much feels like you’re picking up a true work of art.

Of course, prices start at about $6,000 for a Korth Combat Magnum these days. Everything is listed as “Price on Request” (P.O.R.) on the Korth website, but the price list is about eight years old and you can rest assured that prices have not gone down in the intervening years. You really have to pay for this kind of quality.

But, is it worth it? Well, I wouldn’t spend that kind of money on one, even if I had it to spend. But that’s me. Like I said, I can’t warm up to it. But then, I’m also the kind of person who can’t see the sense in spending the extra money on a Rolex or a Rolls Royce. I can admire the level of quality and craftsmanship that goes into making those high-end products, though. And there I’d have to say that the Korth Combat Magnum is in the same league.