Korth handguns, like the semi-automatic 9mm and Korth Combat revolver, are made with the utmost quality and care. That’s not promotional talk, that’s the truth. However, with such high quality craftsmanship comes a price. We’re not just talking monetary value, we’re talking about fear of breaking it.

Try and wrap your head around a semi-auto handgun whose base price—with no frills and just one magazine—starts somewhere around $6,000 and can easily climb to $10,000 or more with a few ‘standard’ options. Go ahead. Try.

I found it almost impossible to do. And hell, I’ve held and shot one. As part of the BBTI tests of the 9mm, we were able to include a Korth semi-automatic, a nearly legendary German handgun. 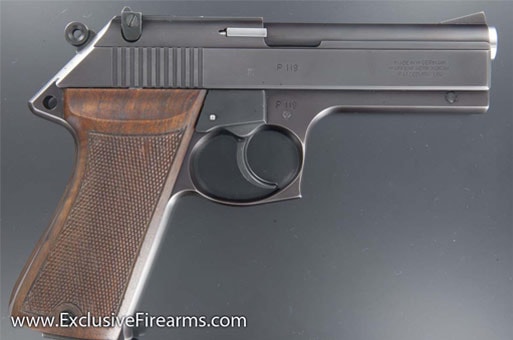 And I’m not kidding about the price of the gun. Everything is listed as “Price on Request” (P.O.R.) on the Korth website. Even though the price list is about eight years old, you can rest assured that prices have not gone down in the intervening years.

Why on Earth would someone plunk down that kind of money on a handgun?

But I have … glimmers … of understanding.

It is phenomenally well made. Everything about it is meant to be perfect. Korth’s catch phrase is “Raw steel transformed into precision.” The thing is made completely out of hardened tool steel, which will last through tens of thousands of rounds without significant wear. Here’s how Korth describes it on their website:

All Korth Arms feature specially selected high alloy steels. For example, all important revolver components such as the frame, crane and even the sideplate are completely milled from drop forgings. After machining operations, all components are subjected to a proprietary process to achieve a surface hardness of up to 60 HRc (Rockwell c scale) … Approximately 600 individual operations are required to manufacture one revolver. Of these operations, only about 30 percent are actual machine work. The rest, all of 70 percent, are true “man hours”…

This level of hand fitting is beyond most people’s experience and perhaps even beyond their comprehension. The fit and finish was so phenomenal that I felt like I wasn’t holding a gun in my hands, instead I was holding a work of art. The same was true for every aspect of the pistol.

When you buy a Korth semi-auto, it is best to get the extra magazines (at $150 a pop, 2010 prices) with the gun because each one is handmade for that particular gun. They fit so tight into the gun that the first time we used it, we thought the magazine was stuck (it was the first time the extra mag had been used). Turned out that it was still in the ‘break-in’ period. Before it would work it needed to be seated and removed a few times. But it fit amazingly tight, so tight, in fact, that you’d never, ever have to worry about dust or dirt getting into the gun. 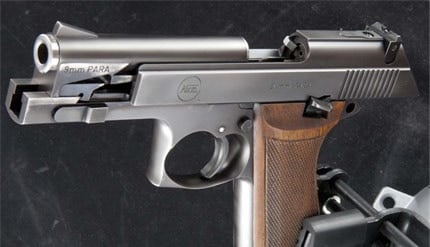 Well, it shot fine. Good. What else can I say?

The trigger was smooth, it broke clean and the recoil was minimal.

Accuracy was without a doubt better than I am.

It fit my hand fine, operated fine, and the sights were fine.

Fine. Fine. Fine. Saying anything else seems almost superfluous. Silly. Of course it was fine. It’s perfect. How could it not be fine?

I felt almost inadequate to judge the thing. If you ask me “how many stars would you give this gun, on a scale of one to five?” I’d say “pinocle” or maybe just stare at you.

In my review of the Korth Combat Magnum revolver, I felt perfectly comfortable in discussing my opinion. Lord knows I’m never shy about saying what I think about a gun. But this gun … just sort of leaves me stunned. Even thinking back on it some time after shooting it.

And I think that is, in some ways, telling. This gun is just beyond me. If you gave me one, I don’t think I’d be able to keep it. It would play with my head too much. I’d worry about having it in my safe. I’d almost be afraid to shoot it.

Good question. I’ll let you know if I sort it out.