A number of years ago, I got wind of a new semi-auto carbine design that made use of an intriguing internal counter-balancing mechanism to tame recoil. All the information about this gun was still very sparse, but the company working on it had some simple illustrations and video showing how the thing was supposed to operate. I sent it to a buddy who has a background in physics and an appreciation of odd and unusual firearms.

That gun was the original KRISS Vector in .45 ACP. My buddy contacted the company and got his name on the list to be one of the first civilians to buy the gun.

Several years passed. There were some delays in getting the gun ready for production. But eventually my friend got word that he would be getting his semi-auto version of the KRISS Vector soon. When it came, we made arrangements to get together and give it a try. 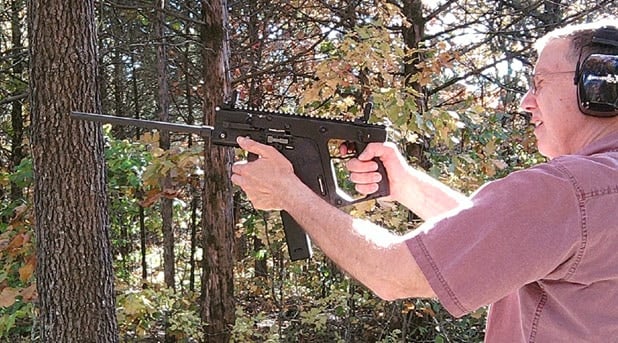 My first impression of the KRISS was that it was well made and sorta futuristic looking, though from a future where things were boxy and a little ugly. We went over the gun and owner’s manual, loaded up some magazines, and gave it a go. There were some minor glitches with it loading smoothly, and the trigger felt rough, but I mostly attributed those things to the gun being brand new and needing some time to break in.

What was most memorable about that first outing with the KRISS was that the recoil was very, very tame, even from hot .45 loads. Partially this was just due to the mass of the gun (it weighs about six pounds). Partially it was due to the low bore axis of the barrel. But in large part it was due to the way the delayed-blowback action is connected to a cam/weight mechanism, which absorbs and re-directs the energy of firing a round. This not only helps to absorb recoil, it helps stop the gun from experiencing muzzle-climb. I was impressed.

Then when we were doing a bunch of ‘real-world’ tests as part of our BBTI research of the .45 ACP cartridge we decided to include the KRISS. I was a little less impressed with it on this second outing. Oh, it shot OK, and we didn’t have any major problems with it, but I noticed how awkward it was to shoot the gun when sitting at a bench, trying to get good readings across some chronos. Well, it wasn’t really designed to be shot that way, but still.

This fall I borrowed the KRISS again in order to review it for Guns.com. Several of us shot it, and the opinions of others mirrored my own. What opinions were those?

Well, that the recoil really is remarkably tame. And the odd sense of the reciprocating counter-balance takes a little getting used to, but that’s OK. And as I said before, that the gun is well made, with the fit and finish you would expect from a modern expensive carbine. The gun shoots well and is reasonably accurate at 25 yards.

But it is somewhat ungainly using just the front magazine-well grip. That’s because you can’t wrap your thumb and fingers around it. There’s a reason that people add a forend grip to the short front Picatinny rail.

And the KRISS website claims that you can shoot the gun almost like a pistol, held out at arm’s length, because of the minimal recoil. Well, you can. Kinda. Try holding a six-pound gun at arm’s length and hitting anything with it. I’m not a small guy, and I could only do that for a couple of rounds. I don’t see this as practical.

That I don’t much see the sense in owning the semi-automatic version of the KRISS carbine. It’s a well-made gun, and does what it purports to do, but that really doesn’t matter too much with non-burst or non-automatic fire. Sure, it may make a lot more sense if you’ve got the select-fire version, where it may make a big difference in terms of the ability to stay on target with minimal recoil or muzzle climb, but outside of those applications it doesn’t shine. If you want it just for the unusual mechanism or because you like the boxy look, that’s cool.

But if you’re looking for a pistol-caliber carbine, I think that there are a lot better choices available for the almost $2000 price tag of the KRISS.