La France M16K Review: If You Get a Chance - Shoot It!

On paper, the La France M16K is a hell of an idea: a somewhat shorter-than normal M16 that handles a low-pressure round, so it’s suitable for use from vehicles or other close quarters, and easy to suppress, too. 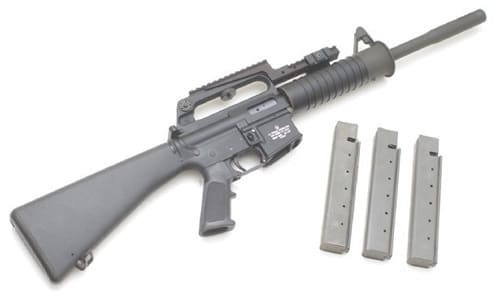 Back in the early 1980s Tim La France decided to come up with a short-barrel M16. Now, the problem with that is that shortening the gas tube on an M16 will increase the rate of fire. But La France figured out a solution, patented it, and then set about creating some very cool-looking short-barrel M16s that were very popular with certain government agencies – and Hollywood. Yeah, chances are if you watched any action flicks made in the 80s and early 90s, and someone had a SBR variant M16, it was one of his guns.

Somewhere along the line he decided to produce a variant that would be designed from the start to shoot the .45 ACP cartridge. Shifting from the standard 5.56mm rifle round to the .45 meant losing a fair bit of power, but it also made the M16K much more useful to shoot from enclosed spaces like cars and helicopters. And the M16K (as in ‘kurz’, the German term for ‘short’) – 45 was born.

A friend of mine got a civilian-legal model (standard semi-auto with a 16-inch barrel), and we were able to use it in the BallisticsByTheInch.com tests of the .45 ACP 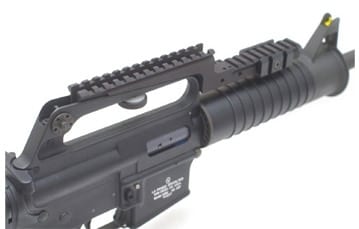 All in all, a well-made weapon. One problem we ran into was that the front handguard is also the mount for the front sight. And the handguard wouldn’t stay solidly attached. Meaning that the sight kept moving left and right.

For our testing purposes, this wasn’t a huge deal, since all we really needed to do was shoot across a couple of chronos set 15 feet out. But if it were my gun, I’d definitely find a way to make sure the handguard was properly secured, and would probably add some kind of optic as well.

This also meant that I couldn’t give an honest assessment of the inherent accuracy of the gun, though others have reported that it is comparable to any other high-quality AR.

The one we shot had been little used, and functioned well. The numbers we got from the testing of the different .45 ammo were about as good as the other 16-inch barreled carbines, perhaps a bit on the low side. Recoil, as you would expect, was minimal. 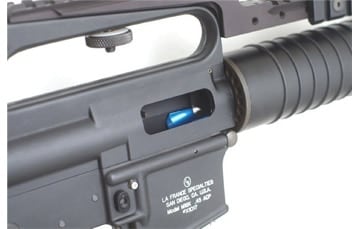 One of the nice things is that the gun will use standard Thompson .45 magazines, and the ones we tried it with worked fine. The magazine well is altered to position the magazine towards the rear, and then the chamber has a long feeding ramp, which seems to avoid feeding problems with hollowpoints — something that can be an issue with some .45 carbines.

The trigger was good, if unremarkable. I think that is what I would say about the gun overall: it is very much like shooting any very good quality AR.

It operated well, was clearly well made (other than the minor problem with the handguard/sight), shot comfortably, and is a fairly unusual gun, in that you don’t usually see an AR in .45 ACP.

Personally, I like pistol-caliber-carbines quite a lot, since they offer a number of advantages, and I can definitely see where the M16K-45 would be an appealing gun for someone who has a fondness for the AR platform. It’s a shame that the gun is no longer being made, and that there are so few of them available. But if you get a chance to handle or shoot one – take it! 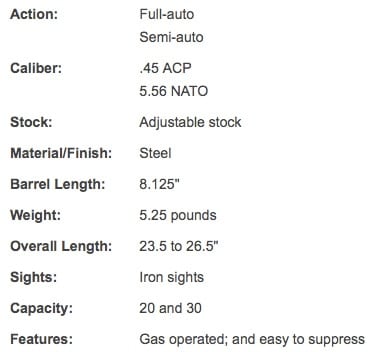