Getting into reloading is intimidating. To avoid ending up with a workbench cluttered with dust-collecting dies and presses, you want to make a good initial decision on equipment, but it can be difficult to avoid buying gear that you’ll outgrow quickly or find too complex in the beginner.
If you’re not entirely sure where to start, I think the Lee Classic Turret Press Kit is the best option for the money. Despite shortcomings, this setup-in-a-box will meet the needs of most handloaders, without breaking the bank, for their first years reloading.

The Classic Turret Press Kit’s MSRP is $300. I purchased mine for $270. The box contains almost everything you need to start reloading. 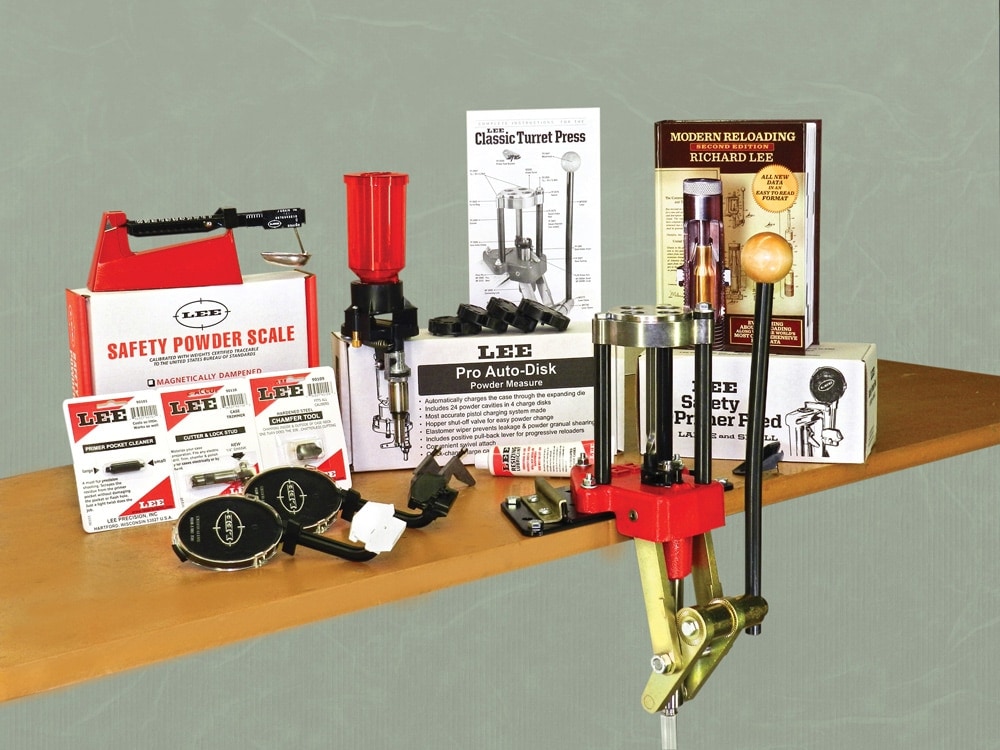 – Modern Reloading, 2nd Edition – All reloaders need a manual (but are better off with two). Lee’s manual is okay if you’re just starting out because it goes into surprisingly little detail on the process of loading ammunition. You need to use the leaflets that come with the equipment to get the full picture of actual handloading.

Lee’s manual supplies lots of load data in an easily-readable format. Their data also exceeds some manuals in terms of ranges of bullet weights and powder types, which is a boon to experienced reloaders.

Worth noting is the overall tone of the book. Written entirely by Richard Lee, the style is conversational and littered with personal anecdotes that give the book more personality than other reloading manuals. It’s refreshing, but I don’t know how helpful it would be to someone brand new to handloading. The Lyman manual provides better detail on the process of handloading broken down into individual steps. The occasional rambling-style of Lee is a lot more fun, but less informative.

Overall, I don’t think it’s the best reloading manual for neophytes just getting into the hobby, but it will serve initially. I strongly recommend making the $20 investment on Lyman’s superb 39th edition guide. The writing is purely lawyerese, but provides the perfect partner to Lee’s book. 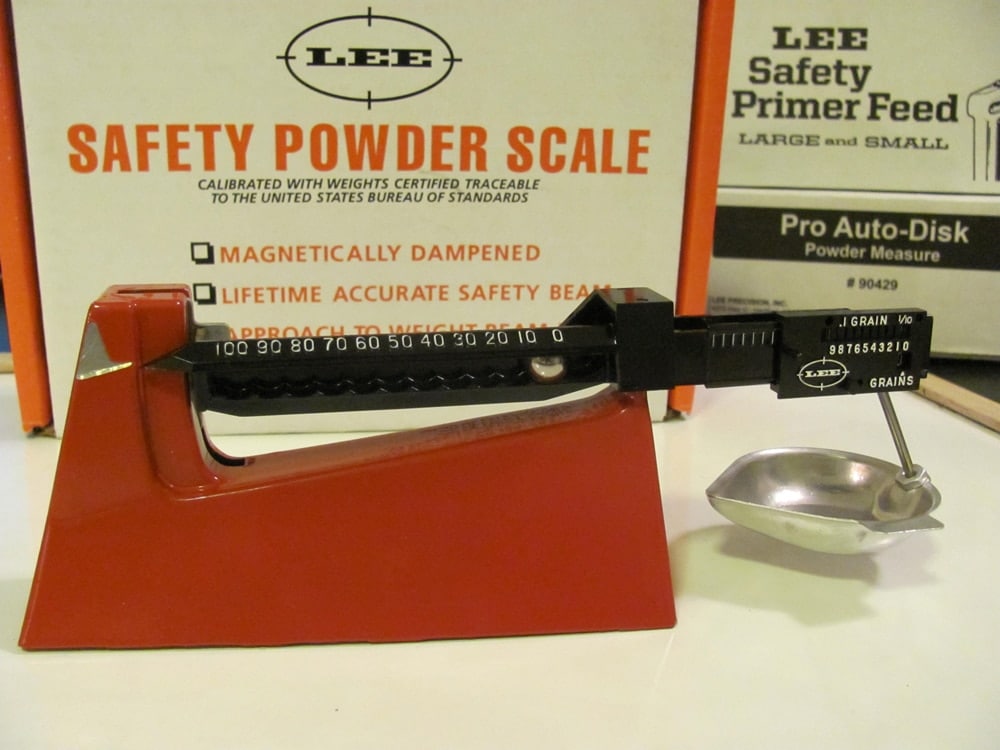 – Lee safety scale – This is a beam scale that will work well enough for most beginning reloaders. It is extremely sensitive, able to detect minor changes in grains, but tends to wander its calibration with handling. Even with the beam magnetically steadied, it’s finicky to work with, requiring far more attention than electronic scales.

This is a piece that I would recommend upgrading, especially if you’re reloading for precision rifle shooting where ultra-consistent powder loads are critical. However, for the beginning reloader, this is a perfectly functional component of the kit. 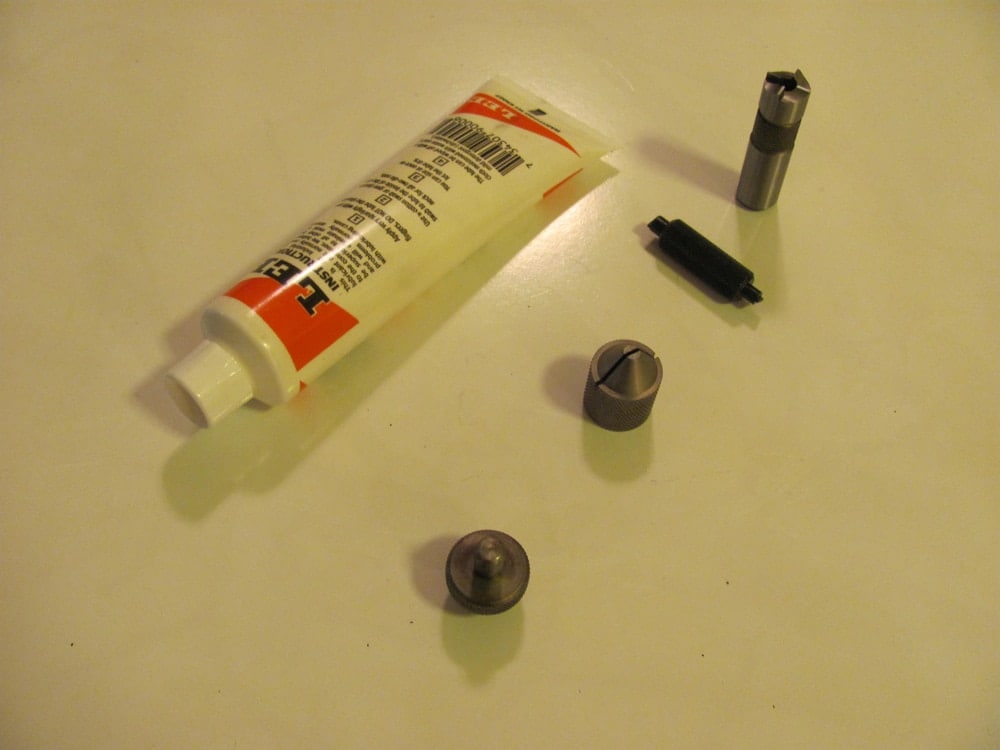 – Case prep tools – In a blister pack you’ll find you get a case cutter, lock stud for the trimmer, chamfer tool and primer pocket cleaner. There’s a case of lube included as well to round out your case prep needs. These tools are all passable but time-consuming and the primer pocket cleaner wears out after a few thousand pieces of brass. I’ve found they work fine but for a high-volume rifle reloader I would consider investing in a quicker trimming unit.

– Large and small safety primer feed – The Turret comes with an attachment that bolts onto its corner, allowing you to suspend one of these priming arms. The two feeds have a disc that holds primers and feeds them into the Ram-Prime. When your press is at the top of the stroke, you push the arm forward, and then push a button on the end of the priming arm. This causes the feed to release a primer into the Ram-Prime.

While they are well constructed and plenty durable for plastic parts, they don’t release primers reliably. You need to be in the exact correct spot, and then, occasionally, something goes wrong with the feed and pushing the button produces no results. Other times the primer is upside-down. Sometimes, the feed gums up so badly you have to stop and tear the thing down to resolve the issue.

This is hands-down the worst part of the kit. It’s workable but it was the first thing I replaced. I recommend investing in a good hand primer to save yourself time and frustration.

– Pro Auto-Disk Powder Measure – This contraption is a little mystifying at first. The Pro Auto-Disk Powder Measure works by pushing a disk with a hole in it back and fourth underneath the powder hopper, and then dropping the powder in the hole into your casing through the expanding die. To adjust your amount of powder, you switch the disks out and then rotate the disk to one of six holes, which vary in size. The majority of the assembly is plastic, with a loose-fitting lid that goes on top of the hopper. Also included is a ‘riser’ that you add to your die to let the hopper clear the priming arm. 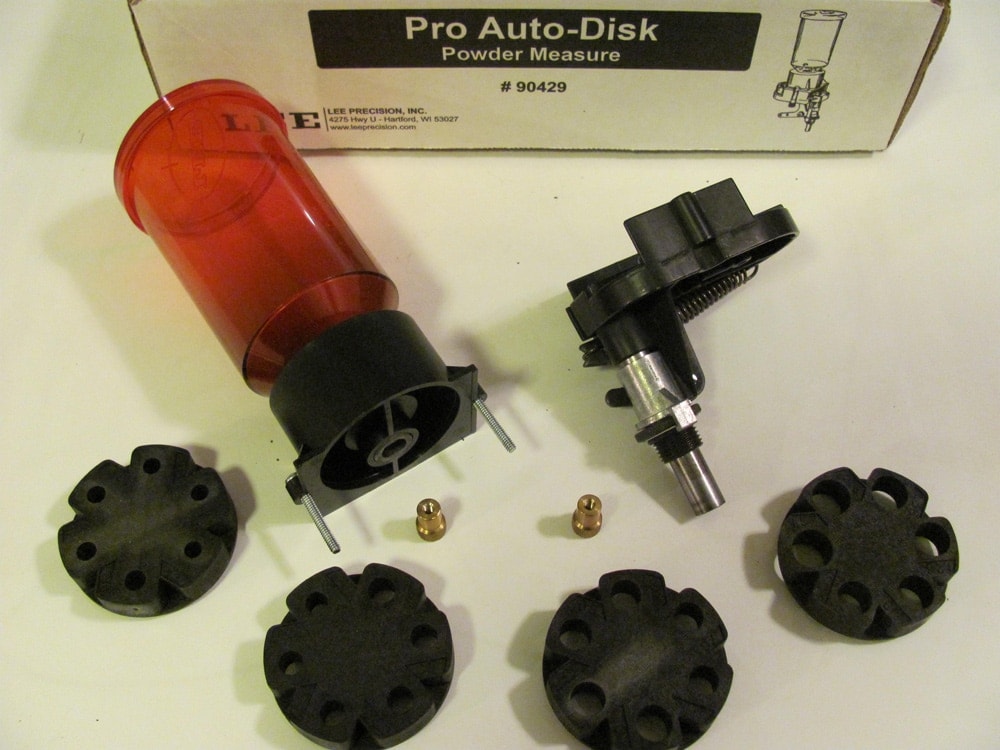 This is a middle-of-the-road piece of equipment. It’s serviceable but not outstanding. The mechanism is kind of crude and doesn’t permit fine adjustment to the amount of powder dispensed. You lose granularity as you increase your loads, as well. Lee offers tools to improve on this, but they’re not in the kit. If you can’t find a combination of powder and disk hole that produces your preferred charge, you’re forced to compromise on the closest setting you can find. 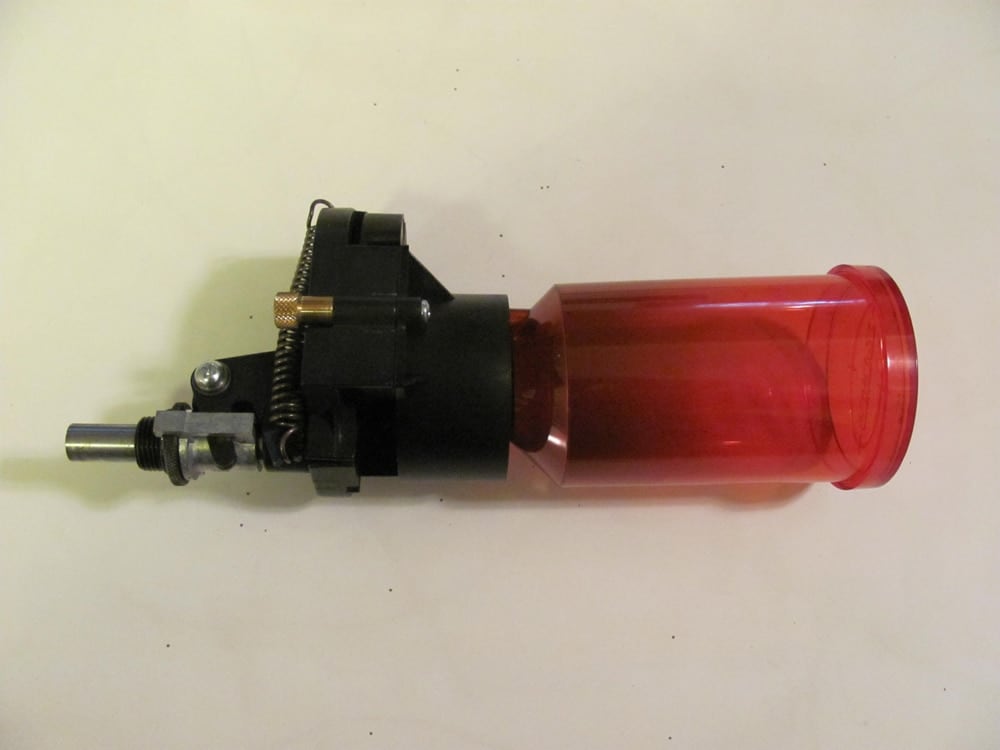 In terms of consistency of charges, it gets a passing grade. Small variances will be found between loads occasionally. In my handgun loads, variance from charge to charge is well unnoticeable, with the rare outlier of 0.1-grain difference. It’s more susceptible to variations using larger-grained powders in my experience, so my preferred powders like Bullseye tend to fare well.

Speaking of powder choices, another issue with the Auto-Disk is that is leaks a little bit with finer powders, especially flakes. As the disk moves, the tolerances are loose enough to allow some flake powders to escape and end up on your bench, in the turret, and so on. It’s not a huge leak, but it’s sloppy-looking and by the end of a long reloading session you might find powder littering your workspace.

Overall, this is a good product with some notable shortcomings. I haven’t replaced it yet and don’t plan to.

– Classic Turret press – The press is a robust chunk of metal. It sports a four-hole turret that indexes automatically using a little rod that runs down the length of the ram. The ram has a cutout to mount the Ram-Prime tool and the linkage to the lever is impressive. I think you’d have to use tools to try to break it. The lever is adjustable for length and is ambidextrous. 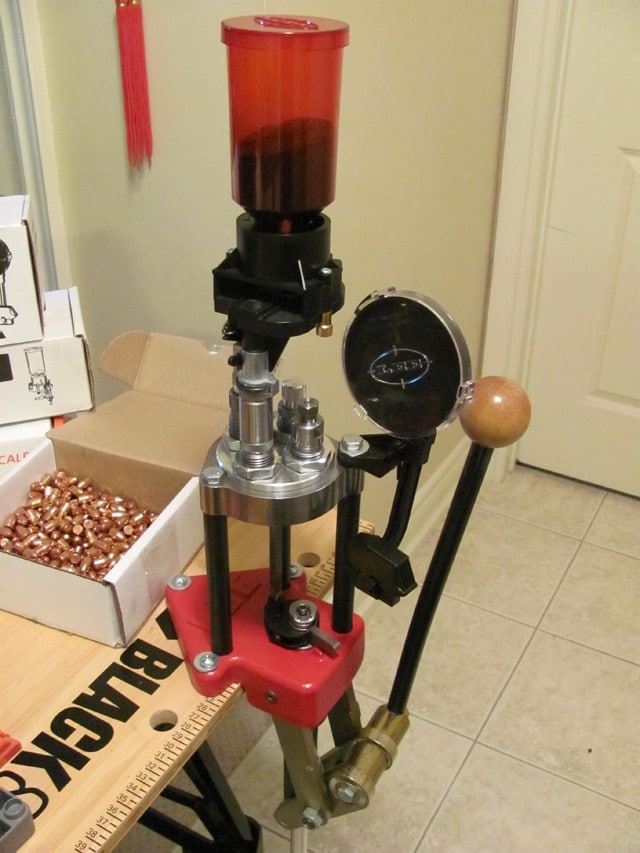 As the core of the kit, there’s not much to say about the Classic Turret. It works well and other than the occasional oiling and touch-up for grime, it requires little maintenance. When lubricated, operation is smooth and resizing pistols and rifles requires little effort. The auto-indexing feature is great when producing handgun ammunition and if you want to slow things down, removing the indexing rod, which takes seconds, allows the turret to be used as a single-stage press. The turret plates can also be swapped out very quickly to change caliber setups.

If I have to list gripes, there are two meaningful criticisms I can make about the press. One is it came from the factory with some minor blemishes on the finish where the paint chipped. The other is that Lee didn’t include the bolts and washers to secure it to your bench, which were less than $1 to pick up but seems weird not to include. That’s the worst I can say about this piece of gear.

The Classic Turret is a quality piece of hardware that could anchor your reloading setup for years. Its tough construction and smooth function make it great for somebody who wants to reload in quantity but isn’t looking for a progressive press.

With the other components of the kit, you’re making a compromise. Although you’re getting most of your reloading setup for a great price, none of it is optimal. Precision shooters will certainly want a faster, easier-to-use scale; the powder measure can definitely be improved; and priming off the press should be considered.

But those complaints considered, remember what you’re paying for this kit (MSRP $300). I still view it as a superb deal. Nothing included is unusable, so if you just want to try reloading for a reasonable price, this is a great starting point. The turret itself can stick around and continue to serve even as you replace some other components of the kit as needed and your reloading hobby expands, which it will. For a new reloader looking for a general setup without diving too far into the deep end, I can’t find a better deal.