Sometimes you come across a gun that can only be described as “interesting.” Just looking at it you might think, “Whoa!” and ask yourself, “What is that?” and “How does it work?” Especially when it’s chambered in the popular .410 shot shell. Herein lies Leinad Derringer, a cheap but well made firearm. 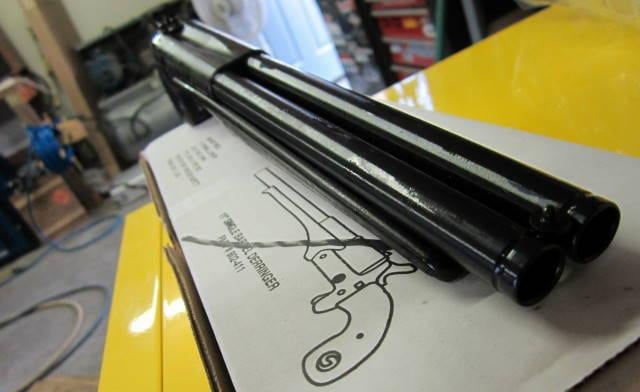 The Leinad Double Derringer is available in a handful of configurations. This model has an 11-inch barrel, shoots 3-inch .410 shells or .45 Long Colt. (Photo credit: ArmsList)

There’s tidbits of information on the Leinad Derringer and other Leinad products, but solidifying some of the facts can be a bit tricky online as the company was birthed from a complicated and somewhat “gray” legal history.

During the 1980s, Wayne Daniel and John Carpenter were the head of a well-known firearms company called Cobray. Their company was well known for their MAC series pistols and Street Sweeper shotguns, but after legal problems including bribing public officials, drug charges, and ATF investigations, the two partners separated and the company was dissolved, according to the Violence Policy Center.

Wayne Daniel then began his own firearms company cleverly named Leinad (Daniel spelled backwards) out of Ducktown, Tennessee. This new company gave rise to these little gems- the Leinad Derringer.

Chambered in .38/.357 or .45 Long Colt/.410 and known today as the “poor man’s judge,” these pistols were made with multiple barrel lengths, such as 3- to 11-inch models, with variations in single-shot, over/under and side-by-side configurations.

The set up is equipped with a large round barrel release located above the trigger with a safety bar located behind the release. The safety bar can be switched back and forth to tip the barrels open and to ready the gun for fire.

The hammer is located in front of the barrel selector switch and it allows the operator to choose which barrel to shoot from quite easily. What you see is what you get with the Leinad Derringer. (Photo credit: ArmsList)

These Leinad firearms are all steel besides the grip plates and are coated in black oxide paint. The design includes a simple trigger, a birds-head handle with a beaded front sight accompanied by a square notch at the rear.

Lastly, with this derringer, both barrels are rifled and operate with a single hammer, meaning you’ll have better accuracy with the .410 shot than the .45 LC.

Shooting the Leinad with .45 LC is manageable with mild recoil, but the self defense rounds from the .410 pack a very sharp punch and the small grip doesn’t help in the slightest.

While the sights seem crude, they are accurate at close range with most loads. These pistols don’t have ejectors so it can be a bit tricky to retrieve spent hulls and cases from full power loads. I recommend bringing a wooden dowel to the range or a pocket knife at the very least to ease in their retrieval.

I’m also not a fan of the paint job on these guns, I feel like it’s just begging for rust. I painted mine with corrosion-resistant gun paint so it could withstand being in my truck box for extended periods of time. 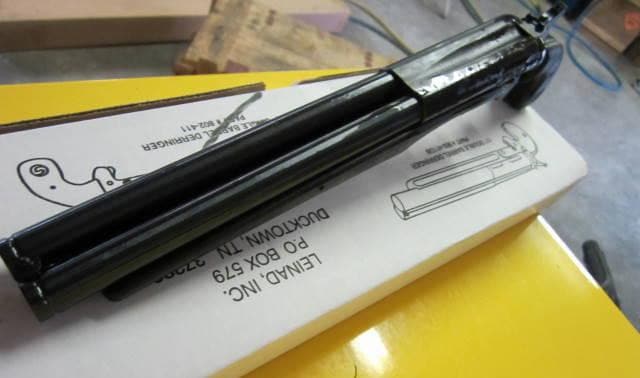 While they might not be the most beautiful gun or the easiest to manipulate, these guns feel solid in the hand and could have many uses from hunting to personal protection — or, if anything, a “just in case” gun.

Due to recent price hikes with many other firearms, the biggest upside to the Leinad pistol is that it can be found at most gun shows for under $100, which makes it an easy pickup with some leftover cash.