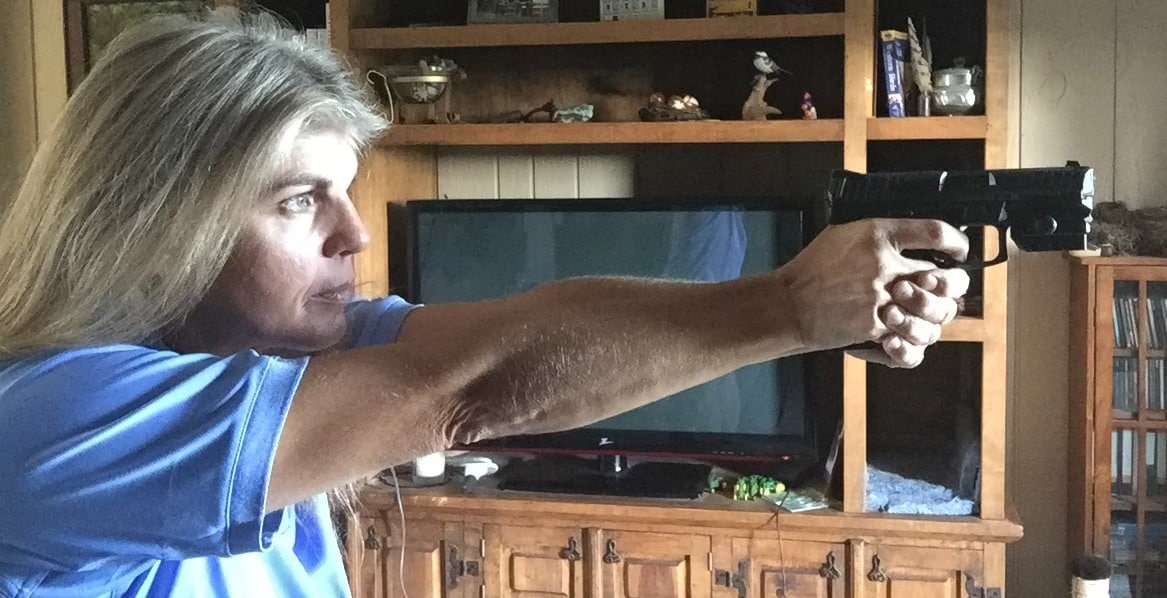 When the folks at MantisX asked me to review their updated training system, first reviewed by Guns.com in 2015, I was frank with them about being an eternal skeptic about e-gadgets and sort of a bootstrapper at heart. They weren’t dissuaded. Try it, they said, and give us feedback. After all, the modern MantisX app is quite evolved compared to the original rendition that appeared on Guns.com in 2015.

This little device is a motion sensor that attaches to the rail of your handgun or rifle like any other accessory. It’s slightly bigger than a stack of four quarters and weighs about the same. For weapons without a rail, the company sells an adapter that fits on the magazine floorplate. Paired with the companion app via Bluetooth, it analyzes trigger press quality and, if desired, speed. The app is offered for Android and iOS.

How does it do all that? Lasers—and stuff. I’m a shooter, not a tech person. Company rep Casey Christensen said he detector’s intelligence was developed from analysis and averaging of high-speed video footage of trigger presses, and the understanding that nearly all trigger press errors occur within 10-15 hundredths of a second before break.

Perhaps it’s just writer’s luck, but the test device arrived fully charged and ready to go. A micro USB cable gives it a quick charge when needed. It held a charge very well, with no sign of flagging between practice sessions.

The device attaches easily with a slotted screwdriver or dime. There’s no recommended foot pounds of tightness, so I just cranked it until it felt tight without putting lots of pressure on the screw. This is an easy process, so much that it can be swapped between guns during a single session.

Use of the app is quite intuitive. The device remembers data from a particular firearm between sessions, so the initial use of a gun takes a little longer than subsequent ones. The app has a respectable but incomplete menu of common guns in its menu, and allows the user to add unique ones. In this trial, the menu offered only the VP9 Tactical model as a choice for the Heckler & Koch VP9—so I used that. It included several EAA pistol models, but not the fairly new SAR9. No problem. The app allowed me to log that firearm into its memory.

The MantisX app maintains a shooter’s diary of sorts that allows you to log and record a host of data. (Photo: Eve Flanigan)

A button turns the sensor on, and of course the app must be open also. The phone can be set aside, held by a nearby person, or stowed in a pocket—the latter I found necessary for practicing timed exercises alone.

Choices of live fire options abound. A basic training session tracks trigger movement and provides the user feedback on a per-shot or multi-shot basis. Christensen says accuracy is measured by the sensor’s detection of the last 10-15 hundredths of a second before the shot breaks, signified on the app as a yellow line on target. A red trace line shows “everything after that,” up to one second in bullseye mode.

The app tracks a shooter’s sessions and progress can be viewed in-app. A report card of sorts is generated from each basic training segment. Progress with a specific gun can be viewed retrospectively. Cards can be emailed or otherwise saved as text messages or photos.

A map of where shots actually landed on target is provided, and it’s accurate. Subsequent to that, a clickable diagnostic target diagram is available, with suggestions on the cause and fix for shots grouping in places other than center. While the instructional photos under this “learning” section are clear and well-presented, grammar and actual information leaves something to be desired in places. Diagnostic suggestions based on shot groups should be categorized in the same way as medical advice on the internet. Individual differences can result in non-typical results. Also, a combination of errors can cause a false result on the target’s “diagnosis.” That being said, it can’t hurt to test a suggested fix when practicing without a competent instructor.

Moving beyond basic training, the device also offers timed exercises like a compressed break drill, in which the shooter stages a finger on the trigger and fires at the cue of an audible signal. It’ll also track the time between shots in multi-shot sequences, allowing a shooter to self-evaluate or even the opportunity for some friendly competition with an objective and easy scoring system.

It compiles data on right versus left-handed shooting, but there appears to be no way to select whether that means using one or two hands. For my own purposes, I logged all support-hand shots with one hand and all primary-hand work with two, so as not to introduce an uncontrolled variable. As expected, scores using the support hand were a bit lower.

I compared my own scores for accuracy using untimed, five-shot sequences with two pistols that have very different triggers: the VP9 and the SAR9. These shots represented the first I’d ever done on the SAR9, while the HK is like an old friend. The results bolstered my confidence in the MantisX’s data quality. My score on the new gun was several points lower than on the old one. After a little more time on the Sarsmilaz, scores were virtually the same, within two points of each other.

I forgot one time to change the setting from dry to live fire before an expert colleague ran an impeccable five-yard, five-shot drill. Thanks to my error, his percentage score on that run was in the mid-80s. Attention to detail matters. It’s not hard to do it right, but neglecting to double-check settings can result in inaccurate results.

There are a couple areas I’d prefer be bit different. One is the display color. The chosen setting, i.e., live vs. dry versus CO2 fire, is blacked out rather than highlighted in daylight conditions. MantisX seems to be trying so hard to be tactical black that it’s difficult to read at times—even the red-on-black app logo tends to get “lost” on my home screen.

The compressed break drill appears to be available only for live fire. Perhaps the system can’t “understand” a manual slide reset with the trigger fully depressed. It’s not a huge disappointment, but does limit use in non-range settings.

A clickable set of instructions on interpreting display pages and definitions of terms used in the app would make it more user friendly.

The only real disappointment is that the rapid fire detection failed to pick up the last two rounds of five-shot sequences about half the time. It did still provide interesting data on the time from signal to first shot, and time between early shots in the string. It was enough data that I could infer whether each string was better or worse than the previous one.

The MantisX represents one of the best systems available as a tech training aid. Especially when using iron sights, it’s superior to some other laser systems in that it doesn’t force the shooter to focus on the target rather than the front sight.

While it alone cannot make a shooter faster if speed is the goal, the trigger motion tracking function should serve as a useful feedback device to determine what subtleties in technique are helpful or not.

Based on the gun comparison data, I feel the device is highly accurate and suitably reflective of performance.

Consumers can have confidence that the device won’t become outdated. MantisX releases app updates often, so the latest developments are available even to “old” owners. Comparing today’s product to the one reviewed here less than two years ago, the advancements are impressive. These folks are serious about staying at the top of their game with this product.

Ordering can be done directly through the MantisX website. The $149.99 includes the MantisX sensor, microUSB chargeng cable, and a very cool little Pelican case with custom-cut foam to protect and keep track of your investment. Floorplate attachments for n0n-railed handguns are model-specific and cost $25.