Marlin 795 rimfires: More than what you pay for

When it comes to buying guns, I’m a firm believer in the saying, you get what you pay for. I’ve seen more than enough of the heartache that comes with trying to save a hundred bucks on a ‘budget’ firearm and then losing out on the range, or in the field or during resale. It’s turned me off from a few brands. But just because I believe this, doesn’t mean I don’t appreciate a good deal and I am well aware that sometimes with guns, you can get more than what you paid for them. The Marlin 795 in .22 LR is definitely one of those cases.

The Marlin 795 is a magazine-fed variant of the widely-owned Marlin Model 60, a tried and true firearm. The addition of detachable magazines brings the Model 60 more in line with modern consumer demands without changing much about a proven design. The rifle comes with a single magazine with a ten-round capacity. 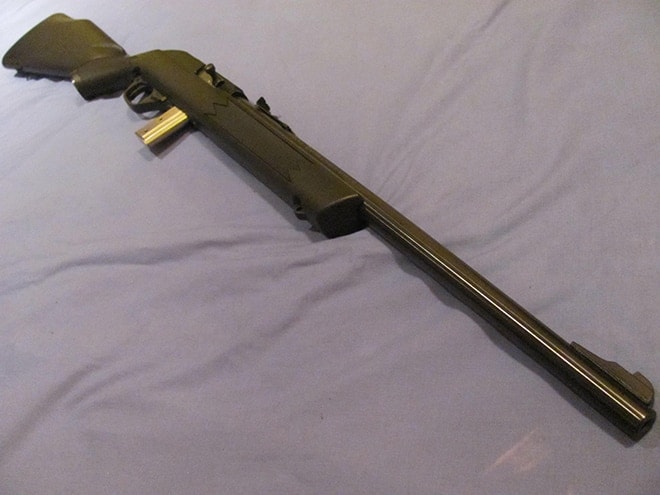 This is a typical rimfire rifle. It has an Micro-Grooved 18” barrel, semi-buckhorn sights with a silver bead up front, and a 13.75” length of pull. The plastic stock on my 795 is extremely light and comfortable when shooting, especially for a smaller stock. The stock comes ready to accept most two-point sling swivels.

These are widely-available rifles sold at the outstanding MSRP of $181, and can often be found for prices in the $160 range. They can pretty easily be found used for even less. At this price, any serious shooter should ask themselves, is the Marlin 795 a ‘buyer beware’ budget gun, or a great deal waiting to be jumped on?

The first thing that I noticed about the Marlin is that it’s light and handy. With a slim feel and weighing in at only 4.5 pounds, the weight makes it an attractive camping companion or hunting rifle. The compact profile makes it an excellent choice for prolonged carry.

On the downside to this, I must admit the gun feels flimsy. This is purely subjective.  It’s not just the lack of weight; plenty of guns are light by design without feeling cheap. It’s the appearance and construction of some of the parts. Specifically, the bolt controls, the sights, and magazine release don’t exactly inspire confidence on first exam. 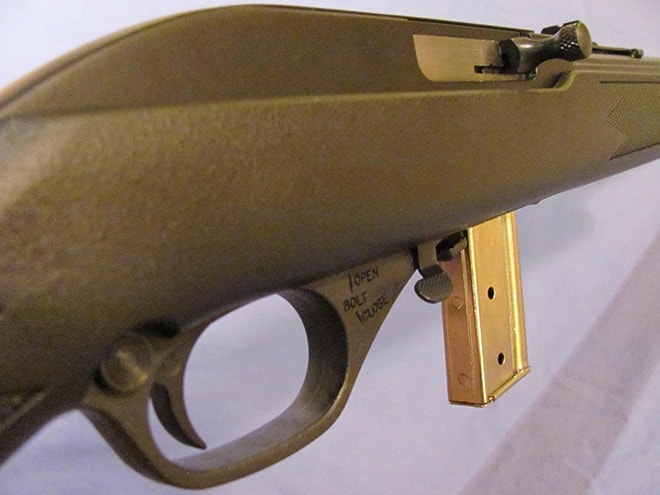 Marlin 795 control group. Though some components felt cheap and the trigger harsh, performance is still there. (Photo: Andy C)

The bolt is locked or released by a small metal tab that protrudes from the receiver above the right side of the trigger guard. It just doesn’t look or feel especially sturdy, especially when you take the rifle apart to clean. It dangles a bit loose and looks easy to bend. To its credit, the part has yet to substantiate my fears with breakage.

Pushing it up while pulling the bolt back locks it open; pushing it down will release the bolt. This is the only way to release a factory 795’s bolt; you can’t ‘slingshot’ it shut using the charging handle. This manual of arms is excellent. It’s intuitive, easy to reach, and requires almost no effort.

The sights on the 795 look cheap and are a bit lacking. While most rifles ship with less-than-stellar iron sights as manufacturers expect everyone to put some kind of optic on, the Marlin’s silver dot doesn’t stand out well against the rear black blade and is easily lost in sub-optimal lighting. I’m not talking about some high-speed night fighting tactical operations with my .22 LR rifle; I’m talking about shooting in the shade in the bush, or at my reasonably well-lit indoor range. These sights are likely the first thing you’ll want to replace on the gun, or at least upgrade by painting the front dot bright white.

The magazine release also feels less-than-stellar. It’s just a plastic extension at the rear of the magazine well that you pull backwards to strip the mag out. It’s not very refined or elegant, nor is it especially positive. After you pull the tab back, you will have to yank the magazine out with some force; they don’t drop free. At least it’s nice to know the magazine isn’t going to drop out inadvertently. 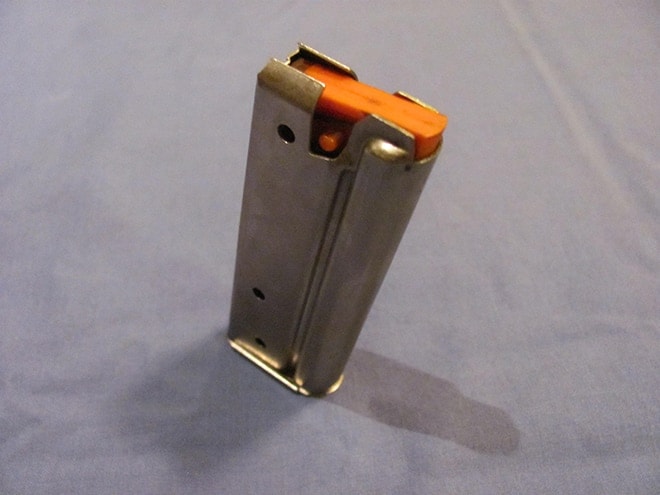 The magazines for the 795 are probably my biggest complaint–I found loading annoying. (Photo: Andy C)

While we’re discussing the magazine, let me say this is my least favorite element of the rifle. The mags are straight-walled stamped metal with a red plastic follower. While their design helps them keep a minimal footprint and weight, they don’t facilitate easy loading. The springs on these are stiff, and even after thousands of rounds it’s a battle to feed them to capacity. Their shape doesn’t help either; there’s no great way to grip them and the lips of the mag are also prone to nipping at your fingers and thumbs as you feed in the tiny rounds. The only thing about the 795 that made it less fun to shoot was stopping to reload the magazines.

The last thing you should know going into buying a 795 is that the trigger is just not very good. With considerable slack, then some creep, heavy break (I measured mine at 5.5 lbs. but it certainly feels heavier in use), the Marlin is unlikely to win you any freehand shooting awards without some trigger work. However, the world of production 22LR semi-automatic rifles is hardly flooded with great factory triggers. I don’t think this is much worse than a stock Ruger 10/22 trigger. If you need a smooth trigger and an economical price, a bolt-action rimfire rifle is probably a better option. Considering that, I’d grade the 795’s trigger as adequate. 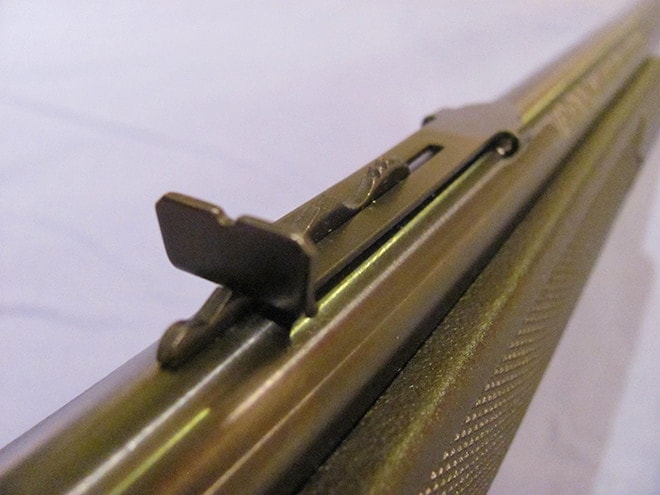 Despite my criticisms of these components, the Marlin 795 was perfectly functional during my testing and suffered no broken parts. While these components could probably use some upgrades, I assume doing so would put a hurt on the of 795’s most compelling features: Temper your expectations and remember it’s a $180 dollar rifle.

If it seems like I’m being terribly negative, I just want to be clear about how this gun is suppose to look and can shine to prospective buyers. You aren’t getting a tricked-out, tightly-tuned, super-smooth product here, but for all those issues listed above, the gun still works as intended, and works well. 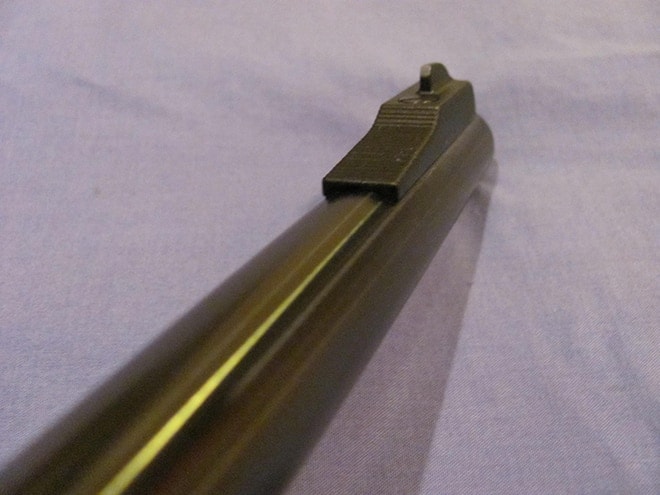 After all that criticism, the Marlin 795 earns plenty of praise where it matters—putting bullets on target. I have owned far less useful rimfire rifles that cost twice as much as the Marlin 795. In shooting sessions, the rifle has exhibited outstanding practical accuracy in spite of the trigger and sights. A natural-handling rifle, the Marlin is simply easy and fun to use. Some of this is the light weight; practically anybody can comfortably hold it for prolonged plinking sessions. Another part of it is the pleasant ergonomics of the included stock. Even with a somewhat short length of pull, it provides a reasonable cheek rise and comfortable grip angle that translates well into practical accuracy shooting offhand.

From the bench, it’s groups matched up nicely with just about anything else I could compare it to. This includes comparisons to it’s contemporaries like the 10/22 and Remington 597, and bolt guns like a Savage Mark II out to 50 yards—what I consider the sort of practical accuracy threshold for most users with stock sights. I have to admit this is what impressed me most for the price point. 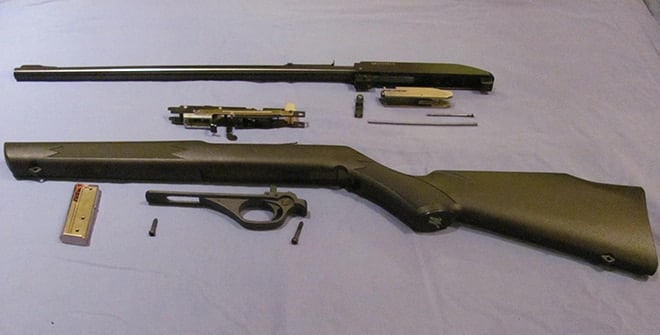 I found the 795 to be very easy to disassemble and clean. (Photo: Andy C)

It’s worth noting that my 795 has been superbly reliable. I can’t say I’ve experienced a perfect record, but given it’s had thousands of rounds fired through it and the inconsistency of most commercial .22LR, this little rifle has certainly earned an endorsement from me in this category. Even if the gun is filthy from back-to-back extended range sessions, it operates very reliably. 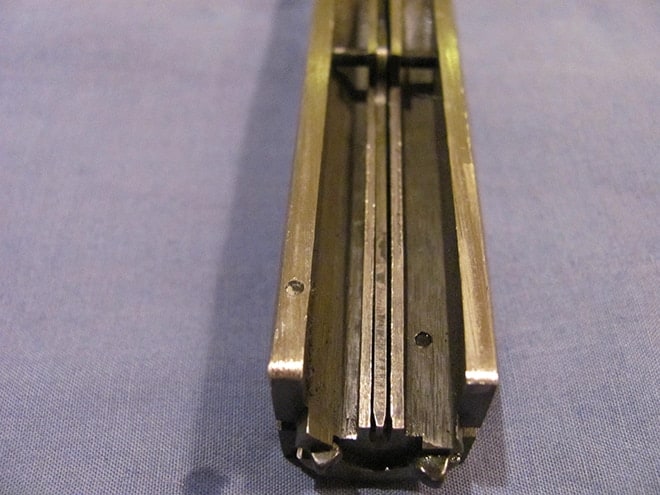 Disassembly reveals rough machining, though nothing that would affect function. (Photo: Andy C)

Will it suffer the occasional ejection failure? Of course. But anecdotally, I’d say it does better in this department than a stock 10/22 or Remington 597. I was also pleased to see the 795 exhibited no particular preference for any type of ammo—it was happy with pretty much anything I fed it.

When the shooting is done, the Marlin is also easy to take apart and clean. Pretty much anything you might want to wipe down comes out with no specialized tools needed and there are no tiny parts to lose under a fridge. Granted, it doesn’t need a lot of maintenance, but I appreciated how easy it was to take care of. Taking the gun apart revealed some rough machining on its innards, but nothing that impedes function. 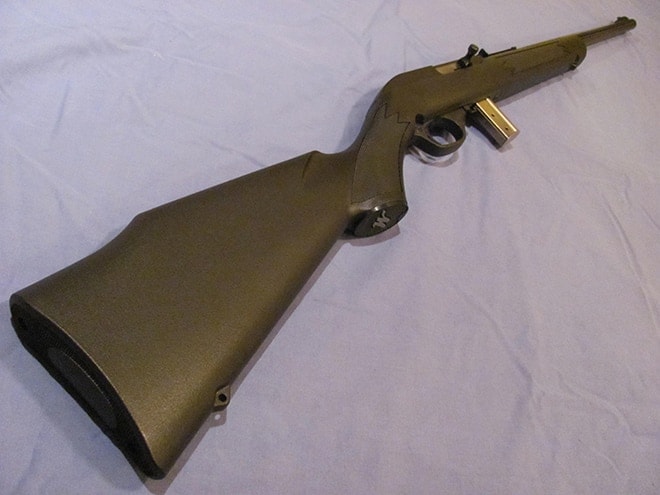 I found the factory stock on the Marlin 795 extremely ergonomic, making for a light, intutitve rifle. (Photo: Andy C)

The Marlin 795 is perhaps one of the best deals in firearms today. While it’s not the prettiest or smoothest rifle you’ll find out there, it’s one of the best performers at and significantly above it’s price point. I think the 795 punches way above it’s weight in terms of pure function. As a first gun, recreational plinker, or general purpose rimfire rifle, I would recommend it without hesitation.