Marlin introduced a line of hunting/varmint rifles a number of years ago to take advantage of Hornady’s super hot little .17 HMR cartridge. They offer many different variants in .17 HMR in their line up of rifles. One of them is the popular Marlin 917V.

The rifle comes with a walnut finished hardwood Monte Carlo stock with sling swivel studs installed. The action houses Marlin’s T-900 fire control system and according to Marlin is double bedded with two screws to enhance stability. Marlin intended for this rifle to have a scope so no rifle sights were installed on the barrel. The receiver is drilled and tapped, and grooved so the shooter would have several different options for scope mounting. The barrel is a precision chambered, button rifled, heavy barrel 22-inches long, and has a recessed target crown to protect the muzzle.

I was in the market for a small bore varmint/target rifle so I started looking for something in my budget in the .17 HMR chambering. I narrowed it down to rifles in Savage’s line up and something from Marlin. After reading many reviews about both makes of rifles and seeing the price difference between the Marlin and Savage I decided to give the Marlin a try.  I bought the Marlin 917V from Cabelas, which was quite a bit cheaper than the comparable Savage rifle I was looking at. I picked up a few boxes of Hornady 17 and 20 grain V-MAX ammo and waited for a nice day to take my new rifle out to the range.

My initial thought after buying the rifle was the stock was a little plain and lacked style and design. I would like to have seen a wider forearm then it had and some checkering, too. The fit and finish was pretty good though and in spite of the lack of features it did feel pretty good when I shouldered it.

I was pleased to see that you get two magazines with the rifle, though, I don’t understand why one is seven rounds and the other was only four, but still it is nice to be able to drop one and insert the other and keep on shooting.

The bluing looked really good and was a satin type of finish. The barrel and action fit was very nice and the bull barrel had a real nice target crown cut into it. It looks funny to see the big bull barrel and that tiny little hole in it. 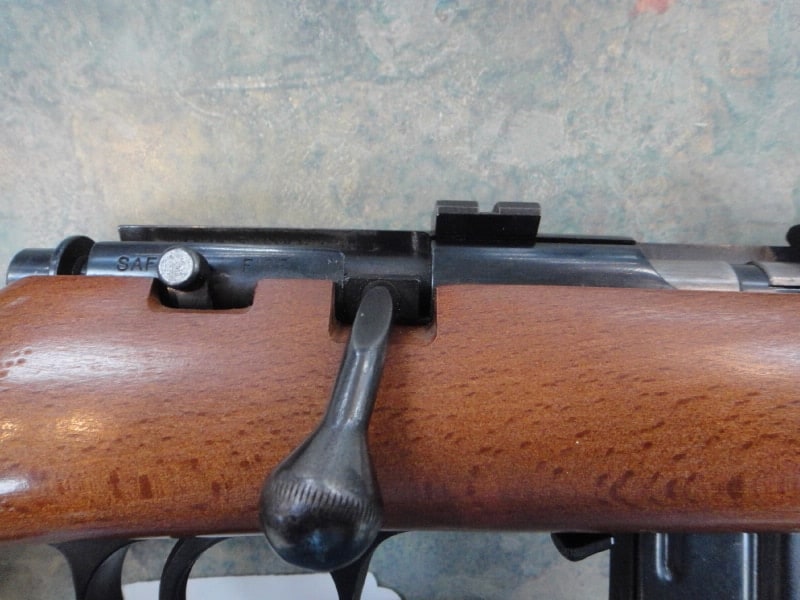 The Marlin 917V bolt feels more like it’s made for a larger chambering. (Photo by Adam Teesdale)

Next I quickly noticed the feel of the trigger and though it had a nice crisp break to it, I didn’t like how heavy it was. It may not be as good as an expensive varmint or target rifle but it would do for a rifle that was a lot less than 300 bucks! I was glad to see the barrel was fully floated and the action had double mounting screws clamping it to the stock and was pillar blocked. All very cool features for such an inexpensive rifle. I was surprised to see that Marlin’s well built all steel action was as thick as it was giving it a very solid feel, and that the bolt felt more like my big game rifles when I opened and closed it, then it did a tiny rimfire.

The safety is on the side of the action and you push it back and forth to operate it. The safety worked well from the shouldered position and is pretty quiet too when you moved it forward, no loud click. The rifle had an expected fair bit of weight for a rimfire at 6 pounds, but that was obviously due to the heavy duty steel action and big 22-inch barrel that was set up well with a little forward bias and it seemed like it would also make the rifle more solid setting in the sand bags.

I had a long range scope on hand, a NC Star 6-24×50 AOE with range finding recital with no home at the time so I decided to use it on this rifle. Not a top of the line piece of glass but good enough for this setup. The only thing left now was to see how it shoots. 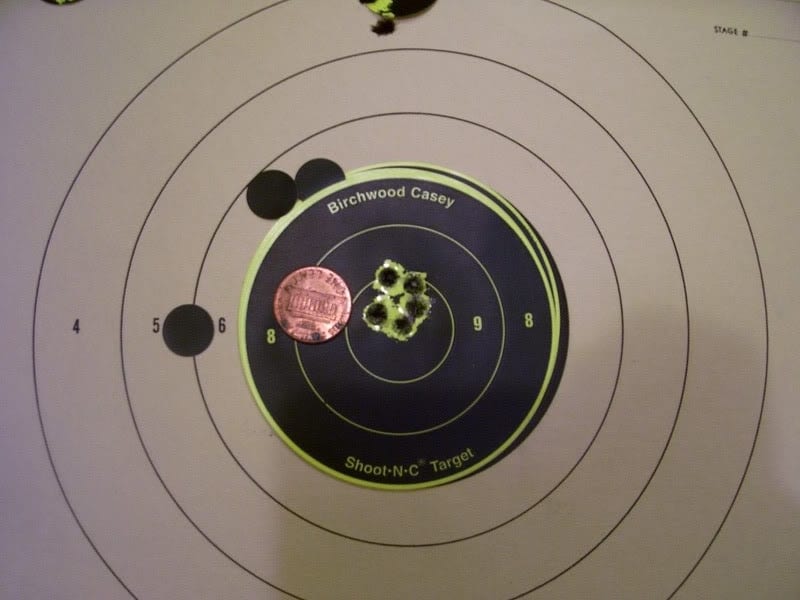 The author’s group at 50 yards.

I picked a sunny cool day to sight in my Marlin 917V with just a little breeze because I read that the tiny round could be easily blown off path by the wind.

I started with the 17-grain V-MAX loads first then shot the 20 grain later. With the rifle sitting on sand bags my first shot was on paper and now I had some work to do getting on zero. The crack of that .17 HMR was surprisingly loud and I have to admit it made me smile as the hot little round screamed down range with almost no felt recoil at all! In fact, I was able to see through the scope the hole appear in the paper soon as I fired my rifle, a first for me. After eight shots I was hitting the center of the bull’s eye from 50 yards. I have to say this rifle was quickly becoming my favorite one to shoot and I didn’t think I would love this tiny round as much as I do. 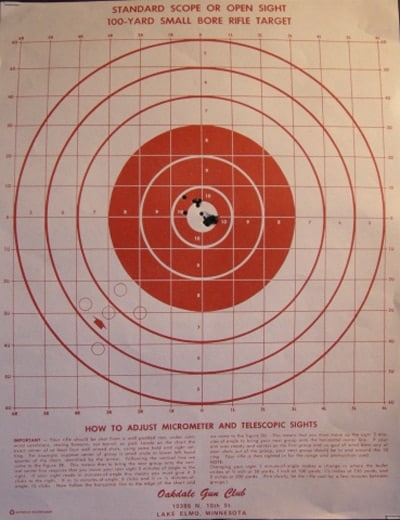 After sighting in at 50 yards I moved back to 100 yards to see how it would do. I am an avid shooter and have shot many different rifles, but never the .17 HMR. The Marlin performed well but I was finding the wind quite frustrating because I had to now start reading the gust of wind and had to wait for it to stop blowing before shooting. Something I was not accustomed to with my big heavy magnums I usually shoot. I could easily hit the target once I got reading the wind down and the 917V would put three shots inside a quarter at the 100-yard target!

I later got bored with shooting a piece of paper so I started hitting pieces of clay pigeon that were lying around. Man was this rifle fun to shoot. While I was doing all this shooting I was also pulling a patch down the barrel after each shot for the first 50 shots while breaking in the barrel. I had to readjust the scope a couple times, but the barrel settled in and now it is right on. After my day at the range I brushed and oiled the barrel and cleaned the rifle.

After spending some time with my 917V I realized I had to do something about the stock and trigger. I started looking online for stocks and found a very nice one from Boyds stocks. I picked Boyds finished thumb-hole varmint stock in red and black stripes for $100. This is a very nice piece of wood from the experts at Boyds and my action and barrel fit in the stock perfectly.

To assemble it, all I had to do was unscrew my rifle from the factory stock and it dropped right in the custom stock from Boyds. The forward screw was a little long so I used a small nylon washer as a shim and it looks fine.

The stock looks very cool and is a big improvement over the factory piece. It has cooling vents in the forearm to cool the barrel and comes with three swivel studs, two for a sling and one for a bipod. The thumbhole fits my hand like a glove and the finish on this stock is awesome. 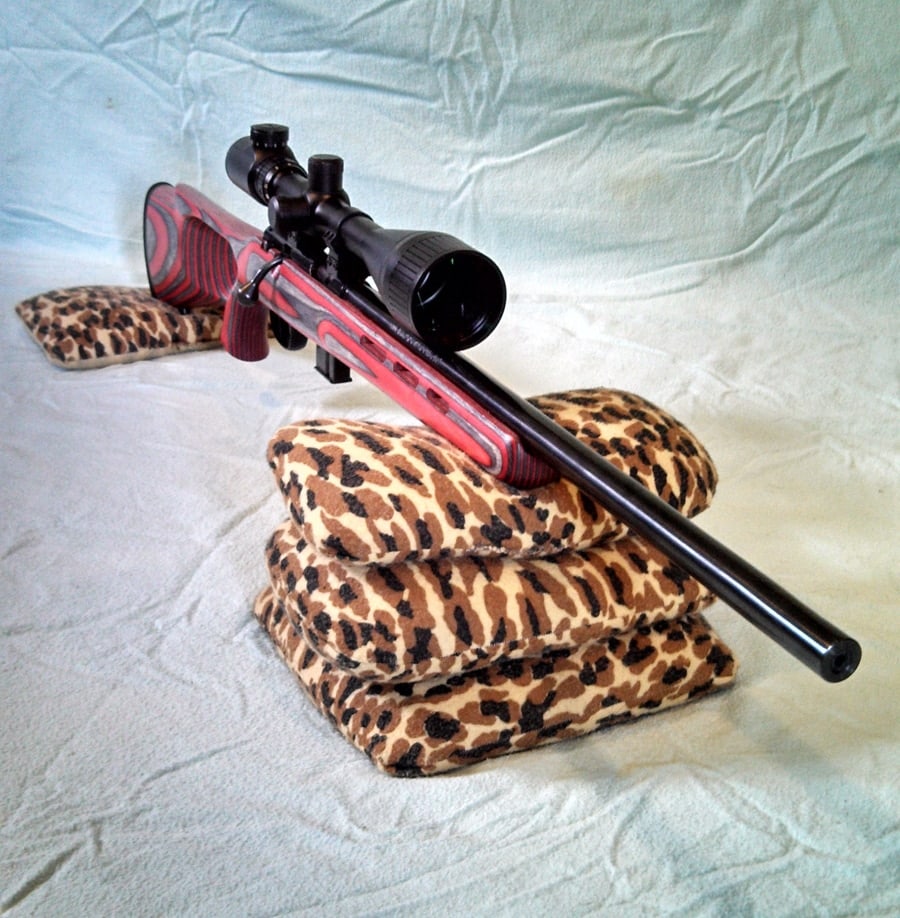 The Marlin 917V with a Boyds stock. (Photo by Adam Teesdale)

Next I went online to see about the trigger. I found a company called Rifle Basix that made target trigger assemblies for my Marlin. The cost is $89.95 so I will buy one soon but for now I wanted to see if there was anything else I could do about the trigger’s heavy pull. I found several blogs from individuals who explained how to remove the factory trigger springs and install lighter springs to lower the pull weight. I followed the instructions and dropped the weight quite a bit. I don’t have a scale so I don’t know what I ended up with but it was a big improvement over the stock trigger.

I have had other rimfires and do own a few 22s, but this was my first .17 HMR. I love this cartridge and it is devastating on the small game I have hunted with it. That tiny round puts small game down hard! I am quite happy with the Marlin 917V in spite of the trigger and stock. It shoots very well and with the customizations I made to the rifle I feel it is better than the much more expensive rifles I saw and it is set up the way I want it.