Marlin 60 History: Why it was and will always be a great rifle to buy

Many, many .22 rifle owners are familiar with the Marlin 60. More than 11 million are familiar with it, in fact, because that’s how many have sold since the thing was introduced in 1960. And there’s a reason it’s lasted more than five decades: ingenuity of Marlin’s design.

In 1959, Edward Nichol designed the Model 99 for Marlin, which was a .22 caliber rifle. The Model 60, offered the very next year, is based very closely off the Model 99’s design.

Marlin replaced the walnut stocks with birch to pinch a few dollars and also manufactured the tube magazine out of brass instead of steel. This move not only saved Marlin money, but it kept the rust monster permanently at bay. For once, saving money seemed to pay off at the customer end, as well. Kudos, Marlin.

Marlin decided to use the Micro-Groove design in the Model 60’s barrel, which was first implemented in 1953 and increased the rifle’s accuracy greatly. The theory behind the Micro-Groove system is that it didn’t damage the actual bullet as bad as competitor’s much-deeper grooves, adding to the already-inherent accuracy of their .22 rifle.

The Model 60 has been offered in at least nine “versions, from a black fiberglass stock to a nickel-plated stainless steel model made exclusively for Cabela. Marlin also produced rifles for chains like Montgomery Ward, J.C. Penny, and Western Auto, to name a few. Yeah, the Model 60 has been around, and it just keeps coming.

The basic design of the Model 60 didn’t change for 25 years until, in 1985, Marlin implemented a “last shot” open feature that held the bolt halfway open after the last .22 round left the barrel so that the shooter could safely inspect the chamber without having to mess with the rifle at all. These models were wildly successful, and Marlin holds the patent for that bolt design. Well-played.

Some Model 60s came with an 18-round magazine tube that went to the end of the barrel itself. The late-1980s saw a major change in that feature when the tube was reduced substantially to hold only 15-rounds so the rifle could conform to then-recently implemented legislation in New Jersey. Later, just after the turn of the century, the barrel itself was shortened to match the length of the tube magazine, going from 22 inches down to only 19 inches. The rifles with the longer barrels and magazine tubes are the most sought-after Model 60s, for obvious reasons, especially with Marlin purists.

What to feed it 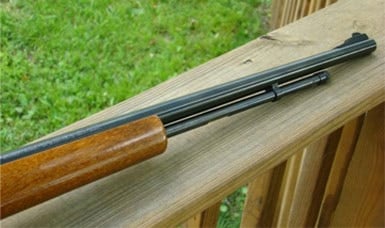 Unlike some .22 rifles, the Marlin Model 60 is designed for .22 LR only, which isn’t a big deal for most shooters because that is likely what they’d buy, anyhow. As with most .22 guns (pistols or rifles), there are countless reports of Model 60s being “picky” when it came to the brand of ammunition used, but that is par for the course. Boxes of .22 ammo are cheap, allowing us to experiment freely with different brands until we find one our rifle likes.

The Model 60’s partner-in-crime is the Model 70, which is basically the same design but uses a box magazine instead of a tubular magazine, much like the Ruger 10/22. Introduced in ’67 as a Glenfield, the Model 70 also remained largely unchanged until 1983, when Marlin decided to drop the Glenfield designation. Marlin also dropped the stock-checkering and the barrel band when the Glenfield went the way of the Dodo.

The Marlin Model 60 has always been extremely cheap to buy when compared to other guns on the market, and they continue to be a great bang-for-your-buck today. Keep your eye out at pawnshops and gun shows because many times you can pick up a Model 60 in really good shape for around $100. Drop another few greenbacks for a box of ammo and have yourself a fun day plinking. That’s what the rifle was made for.