Gun Review: Finding a great carbine one Marlin 1894C at a time

I’m sure most gun owners have experienced the joy of finding a great firearm. One that fits right, looks great, functions flawlessly, and is fun to shoot. Kind of like love at first sight, a great relationship just falls into your lap. These types of experiences are rare because, so many factors need to come together to make it work and last. For me, the Marlin 1894Cwas not one of those experiences, yet it kinda was. Allow me to explain.

For those unfamiliar with Marlin’s 1894 line, they’re lever-action carbines chambered for .44 or .357 Magnum cartridges. The .44 versions are heavier and longer than the .357 model I own that forms the basis of this review. Common among the rifles are a right-sided loading gate feeding a tubular magazine (nine rounds for the .357, 10 for the .44), a side-ejecting action, and hammer-block safety. All 1894s come prepared to accommodate a scope if you’re so inclined.

Gauging from the reaction of many shooters at my range, this carbine is a head-turner. The handsome walnut hardware of the Marlin grants a pleasing classic look. On close exam, the gun’s fit is a bit rough with some gaps where wood meets steel, but the bluing is good with no tooling marks or mangling by screwdrivers. The rubber buttpad doesn’t mar appearance and pins the 1894C to your shoulder well. The only blemish is Marlin’s ‘Bullseye’ trademark on the bottom on the buttstock. Why they chose an out-of-place looking, generic and ugly logo to stamp on such pretty guns is beyond me. But given it’s on the bottom of the rifle, it doesn’t stand out too much. Some unobtrusive sling mounts complete the package. Overall, the carbine looks great. 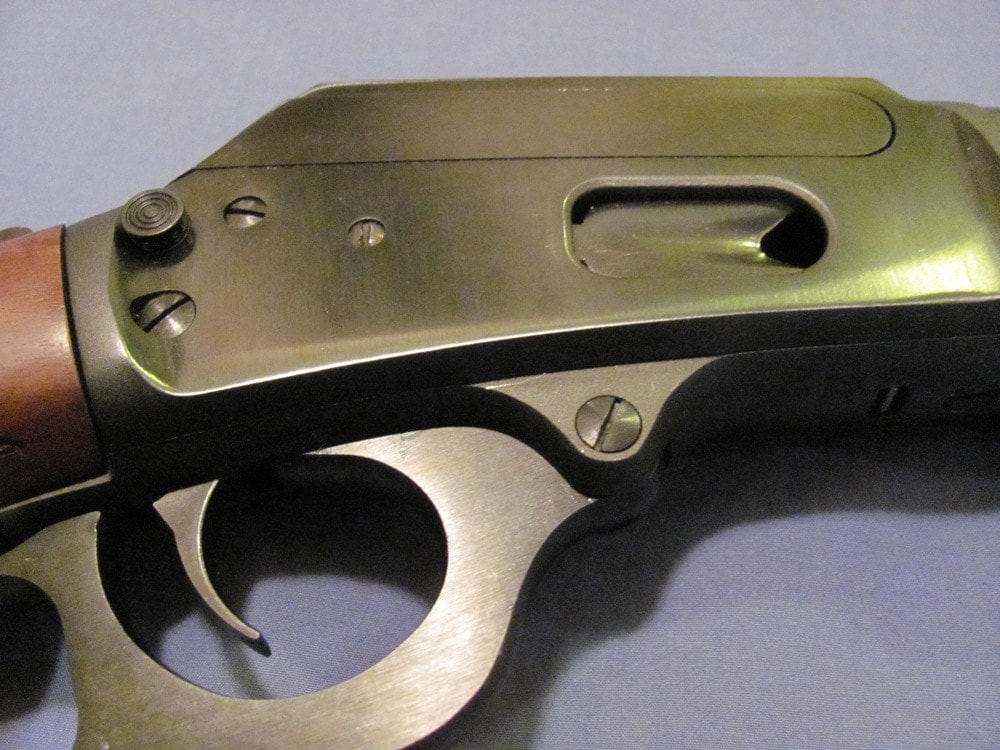 The Marlin 1894C with the action closed. (Photo credit: Andy)

Picking it up, things get even better. A compact 36-inch overall length, 18.5-inch barrel, and 6 pound overall weight make the 1894C a swift-handling carbine well suited for just about anyone.

Lightness combined with a compact and slender profile makes it a fun bush gun that comes to the shoulder quickly and points easily. I can’t overstate how ‘right’ this gun feels, and almost everyone who shoots it — experienced or neophyte — tells me how naturally the 1894C aims. This ease of use is usually reflected with good precision. With the light recoil of pistol-caliber rounds, follow-up shots are quick and groups stay tight.

All controls are comfortably manipulated from a firing stance. Some people find the loading gate on Marlins difficult to operate, and admittedly at first it feels like a deathtrap for fingertips. It loosens up a bit over time, but still nips fingers. Putting the last three rounds into the tube can be a chore, but worth it for an uninterrupted string of 10 shots. The lever loop is big enough that I have yet to hear somebody complain about it being undersized.

Peering down the sights, an adjustable rear folding buckhorn clear of markings is paired with a hooded front sight with a small gold bead. There’s nothing wrong with it, but it’s one notable area where the Marlin could use some improvement. The gold dot disappears in sub-optimal light.

Fortunately, the gun comes ready to mount a multitude of available optics. I’m partial to Skinner sights on my own rifle, as I find practical .357 Magnum ranges don’t require a scope and this type of sight works well for me. Scope installation, should you choose to take that path, should be easy. Fiber-optic sights are also readily available and seem practical, but I think they would hurt the classic look of the Marlin. 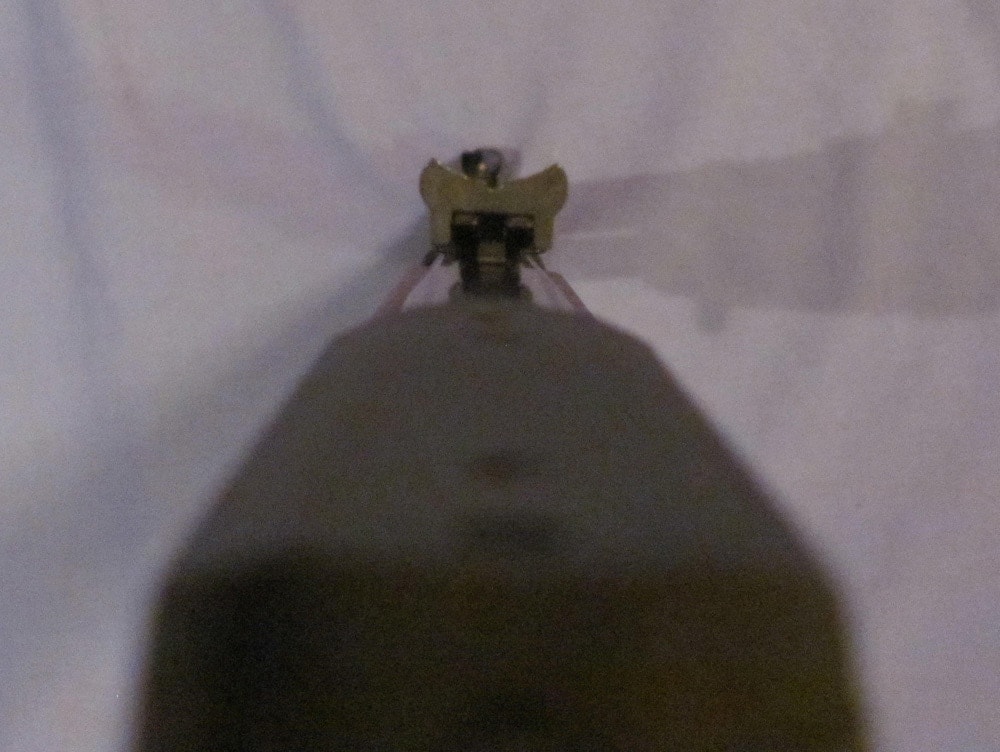 Overall the 1894C looks great, the ergonomics are on point, and it offers practical features out of the box.

Now I’m about to talk about actually shooting the thing, and unfortunately, things are also about to go sideways.

My first Marlin 1894C came home after draining $700 from my bank account, taxes included. I went over the rifle as I do with any new firearm, giving it a close inspection.

The bolt’s top was a bit rough and there was a burr or two inside the action. Function tests with dummy rounds revealed a more significant problem. When cycling the action, the round in the chamber ejected without difficulty, but the round being fed by the elevator would often get stuck. It was wedged inside and I couldn’t move the lever at all. To resolve the problem, I had to unscrew the lever and remove the bolt, but then all the rounds in the tube would come springing out once I cleared the jam. Something was amiss, but a quick consult with some more experienced shooters indicated it might have just been finicky about that profile of round. I was using .38 Special round nose dummies. I thought, “No problem. I’ll take it to the range with a half-dozen different bullet types and see what it likes to eat.” 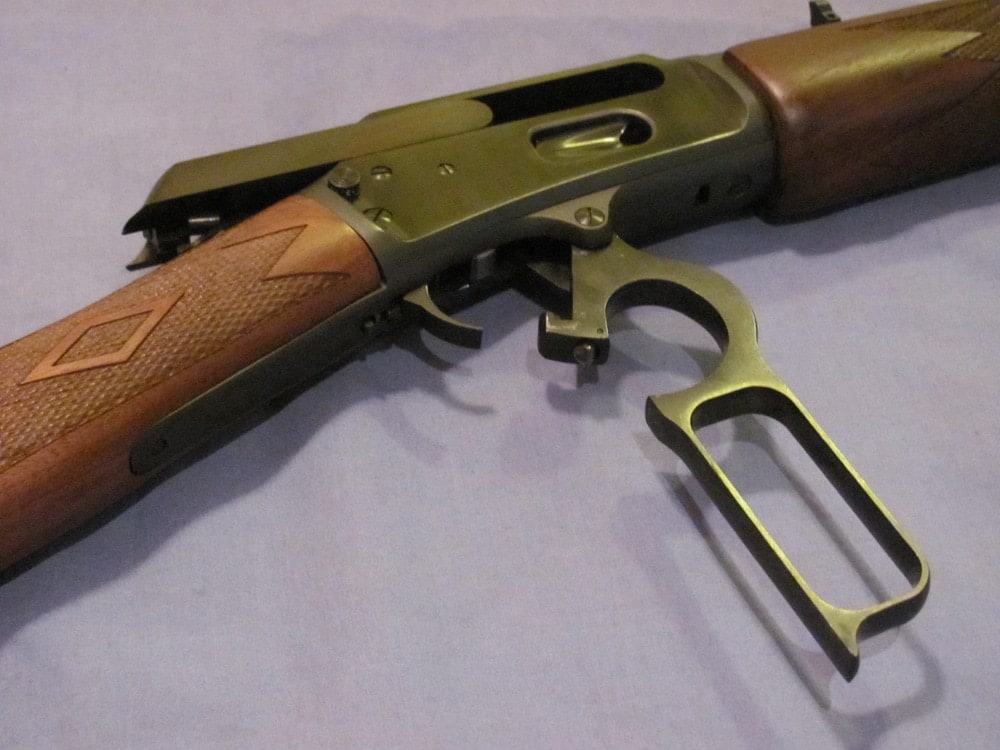 The Marlin 1894C with the action open. (Photo credit: Andy)

It turns out my Marlin was on a hunger strike because the most rounds I ever put through the gun consecutively were three. The jam occurred repeatedly, and it was worse the more rounds were in the tube. I’d never taken a gun apart so much at a range. It was infuriating.

After some contact with Marlin’s customer service, I ended up mailing the rifle to them. They informed me my 1894C shipped with a receiver malformed beyond repair and I’d be sent a new rifle. Two weeks later, a new 1894C showed up at my home.

I’m not reviewing Marlin’s customer service, but I think it’s worth noting they paid shipping both ways and a three-week turnaround is pretty good where I live. There was zero hassle and the whole interaction was as positive as you can get for having just bought a defective product.

With some nervousness, I took the new 1894C through the same exam and found none of the burring or rough action of the previous gun. It fed both .38 and .357 dummy rounds flawlessly. The range trip was even more encouraging as the carbine devoured every type of ammunition I put into it. The lever was smooth out of the box and has only improved with time and use. This is the gun I wanted in the first place.

After over 1500 rounds down the barrel I have yet to encounter a mechanical issue. The rifle’s finish has stood up to Canadian winter use and still looks superb. The closest things to failures have all been caused by new users treating the lever too delicately. The loading gate is still stiff, but reasonable. When working the action, the lever feels slick and smooth, with one crisp even action easily cycling ammunition. Using it should put a smile on anybody’s face. The 1894C’s only improved with use.

The trigger on these carbines has gotten some negative press, but I don’t see a problem. For a $700 lever rifle, I wasn’t expecting a 2-pound target trigger. I think the Marlin’s 7-pound pull is a perfectly adequate working trigger. Comparing it to some Browning BLRs, I actually prefer the Marlin trigger as mine is a clean break with no wiggle or travel. Press and shoot, just the way it should be.

Speaking of shooting, the Marlin’s gets great results out of the .357 Magnum and even the .38 Special. Handloads and factory ammunition alike reach new heights of performance. At 25, 50 and 100 yards (debatably the .357’s maximum sensible range), practical accuracy is there. I know many reading this could shoot this carbine much better than I. Typically new shooters firing guns for their first time at the range with me do their best with this dandy little carbine out of all the guns they try.

After an exceptionally poor introduction, the 1894C totally redeemed itself in my eyes and went on to become my favorite gun. Unfortunately, the initial case of a faulty gun also makes me feel funny about recommending it. Why was my first carbine a total lemon? I’ve heard things from poor quality control to deliberate sabotage during Remington’s buyout of Marlin. Is this a common issue? A cursory search online shows a healthy collection of others with the same gun having issues, but then a search for “H&R Topper Problems” (the most reliable firearm I know of) brings up tons of results as well. I have no clue what the odds are your 1894C will be unusable out-of-the-box.

In the end, the fairest metric on recommending the Marlin 1894C is: “Would I do it over again?” Would I buy this same gun, even knowing it was defective? Putting it that way, I would say ‘yes’, but with reservations. The wait and inconvenience was worth it to get the second firearm, which is amazing. Ultimately, the carbine is just that sweet. If you want a fun, handy lever gun at a reasonable price, the 1894C is hard to beat, even with that potential hiccup.