Gun Review: Mauser P08: 'Everything it's hyped to be' (VIDEO)

It was one of the first semi-automatic pistols and the design was so good that it saw service through two World Wars. As a matter of fact, it continues to be used around the world today. Was it John M. Browning’s M1911? Nope — Georg J. Luger’s. We’re talking, of course, about the Mauser P08. 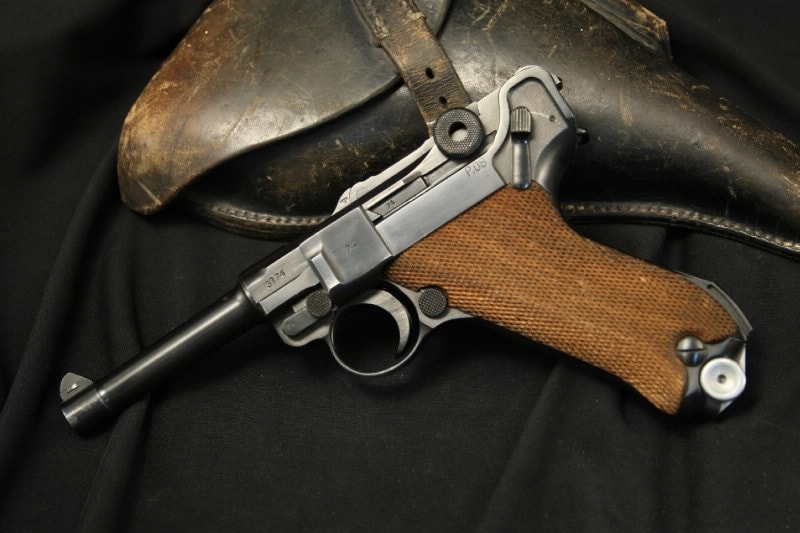 It’s a gun I knew and loved through the war movies I grew up watching. While I always rooted for the ‘good guys’ to defeat the Nazis, I always thought that the Germans had the cooler pistols. But it wasn’t until very recently that I had a chance to actually shoot a WWII-era version, a 4-inch barrel standard-army one made by Mauser in the early part of the war. And it was everything it’s hyped to be, so I was not disappointed. 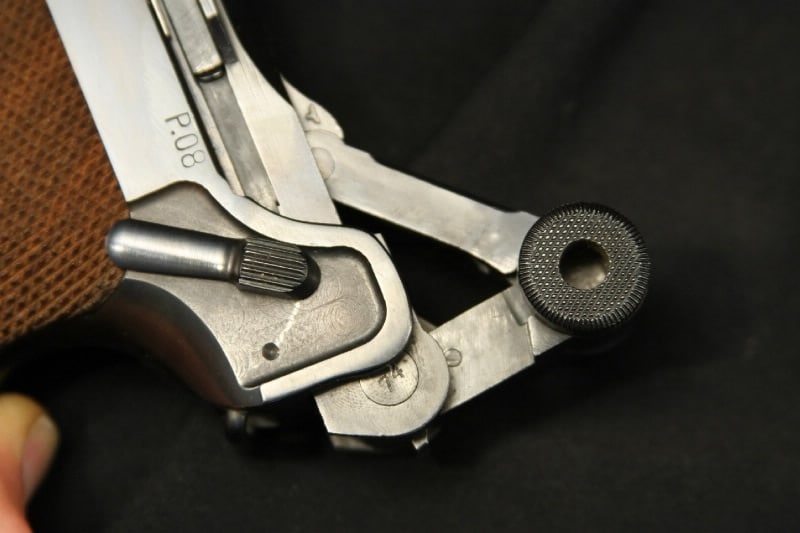 Now, I won’t diss the 1911 because I love the design, and own several examples of it myself. Browning was a genius of the first water. But the P08 — commonly called the ‘Luger’ after its designer — is still a very cool design. I think that it is the articulated joint mechanism that operates it. It’s an obvious mechanical connection to an older time, like an evolutionary link that allows you to see something of how the thing works.

And how it works is through what is called a toggle-lock action. Basically, that articulated joint is at the back of the receiver, and is locked with the barrel when the action is closed. When the gun is fired, this whole assembly comes back about a half inch, and then the barrel stops while the recoil of firing the round keeps the breech and articulated joint moving rearward. A cam then starts the upward motion of the joint and the breech still moving back in a straight line. The spent case is ejected, and then a spring pushes the breech forward, stripping off a new cartridge from the magazine, which holds eight rounds, and the whole thing then locking back in the firing position.

It has the advantage over the 1911-style pistol of not having a slide come flying back. Unfortunately, you need more clearance on top for the articulated joint to move. And it can be prone to failure if the mechanism gets too dirty or tolerances get a bit sloppy.

So, what was it like to finally have a chance to shoot one of these guns? 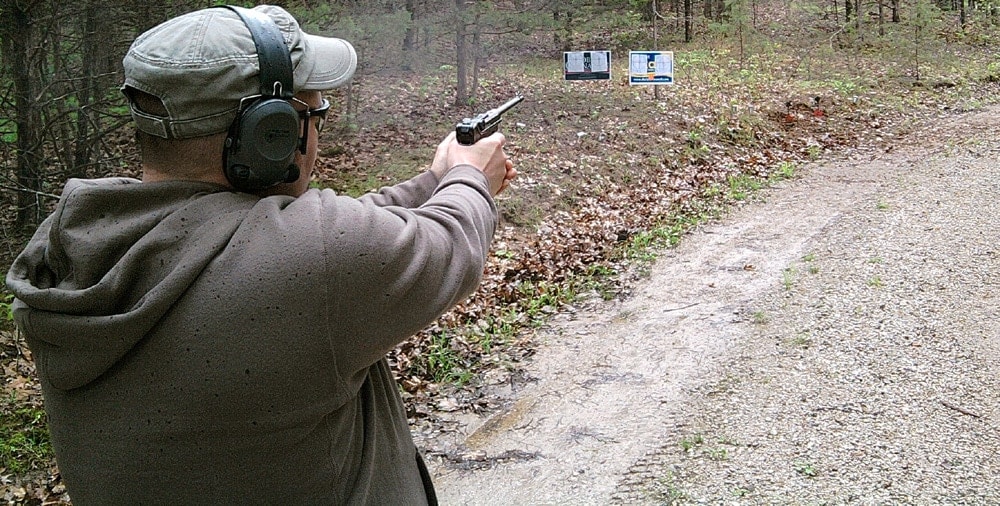 Well, first off, just handling it was a very familiar feeling. That’s because the ergonomics of the Luger were closely emulated by Bill Ruger when he designed the classic .22 Standard model (and the subsequent spin-offs of that gun). I grew up shooting one of the MK I Target guns, and still love the bull-barrel model I’ve had for more than 30 years. Just a glance at the Ruger and the Luger will make the connection apparent. Picking up the Luger, it felt just like my .22. Same grip angle and shape. Similar balance and feel in the hand.

Shooting the gun was different, though. And I don’t mean in just the difference in the recoil between the .22 and the 9mm. No, the Luger has a different motion to the recoil. Some of the energy you feel does come straight back as in any modern slide-design gun. But there’s also some re-direction of the energy upward, thanks to the way the articulated joint moves. And since it is at the back of the gun, it tends to change the dynamics of how the gun moves in your hand. There is less of a feeling of ‘muzzle-flip’, though your whole hand moves up a bit. 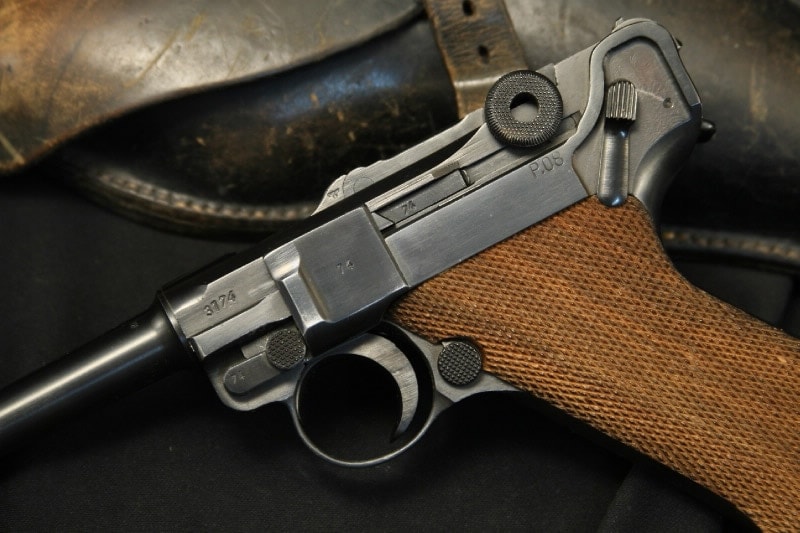 The controls on the Mauser P08. (Photo credit: Gun Auction)

This made it easy to quickly re-acquire your target, and took some of the ‘snap’ out of shooting 9mm Parabellum rounds, which are a high-pressure rounds. I’m not recoil sensitive, but I could see how this design would appeal to someone who was.

Otherwise, the Luger shot like most decent quality used guns. Given that it was some 70 years old, everything was in good shape (this gun was not ‘collector quality’ – just a decent firearm which had been shot and cared-for in the intervening years). The trigger was surprisingly good, not at all stiff or mushy. The sights are basic, with a front blade and a fixed rear notch, but the gun shot decently accurately at 15 to 25 yards, and hitting about a 4-inch group wasn’t difficult.

Mechanically, everything worked fine, and it seemed to still have pretty good fit and finish. The mechanisms were tight and in overall condition good. There was some holster wear and handling dings to the finish, but it was holding up quite well. The original magazine for the gun worked fine, and the gun accepted a much later-model reproduction magazine without a problem.

If you ever get a chance, give one of these guns a try. And realistically, if you find a good used one, don’t be afraid to buy it and shoot it (if it checks out). Yeah, sure, there are prized collector Lugers out there, which may have belonged to someone important or be valuable for another reason, and those go for a pretty penny. But a run-of-the-mill shooter can be found at a surprisingly reasonable price — somewhere between $500 to $600 — now and then, and there’s no reason not to enjoy shooting such a gun.