For operators and competition shooters, the tradeoff of a few ounces of rail for the benefits of a long sight picture and nice iron sights is a no-brainer.  But most of these rigs are made by boutiques and cost more than the shotguns themselves.

Mesa Tactical’s new rails get the job done at a fair price.

“For some time there has been demand, especially from competitive shooters, for a longer rail system to support more shotgun sighting and optics alternatives,” said Mitch Barrie, President of Mesa Tactical. “These new rail systems provide the desired flexibility in a sleek and robust design.” 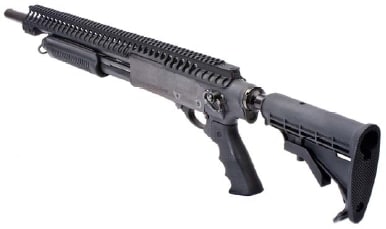 Their new 24-inch rails start at $200 if you want a barrel or magazine clamp, $145 if you don’t, and are available for Mossberg 500, Remington 12-guage pump shotguns (specifically the 870, but it’s also compatible with others).

They’re also available in kits with telescoping stock adapters for that extra dose of tactical. Their “High Tube” adapters use standard AR-15 grips and buttstocks, and are designed to put your cheekweld right where it needs to be for flip-up BUIS, and they even have models with recoil-dampening stock tubes.

Mesa Tactical’s also come out with a rail kit that holds spare shells, called the SureShell Carrier and Rail, which is available in with either a 4-½-inch rail or an extra long two-foot rail for Mosberg 500s, and the shell carrier can hold four, six, or eight shells.

Prices for these aren’t bad, either, starting at $115 and topping out at $270, depending on which configuration you pick out. 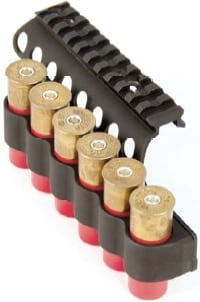 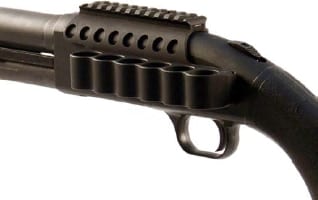 These are a great way to tacessorize a pump shotgun you already own or put together a competition pump on the cheap.