Like the JC Higgins and Glendfields from the other major catalog companies, the Montgomery Wards’ “Western Fields” brand was stamped on guns made by some of the biggest names in the U.S. firearm industry – Savage, Mossberg and Marlin to *name a few.  These are budget guns of old and while some out there may be dangerous to even use, others are considered high prized collectables, and in between the two there are still some out there that are great bargains.

The Model 30 and 31 were actually the Savage Stevens 520/620 pump action shotgun was designed by John M. Browning.  They were first introduced in 1904 and were sold with the Stevens name and also rebranded for the major catalog retailers like Montgomery Ward’s Western Field line.  In 1920 Savage bought Stevens and continued to produce the model 520 for a number of years.  The exterior of the 520 was redesigned to have a more “modern” look and was designated the 620. They are the same internally. There were also around 35,000 of these made for the U.S. military during WWII in the trench gun style.

There is one big thing that sets the 520 apart from most other pump shotguns.  It is a takedown design.  The barrel and magazine tube come off the receiver pretty easily.   There isn’t room in this article to tell you how, but the instructions (.pdf) can be easily found.

These are one of Browning’s designs that don’t seem to have the collecting market hype surrounding them.  They can be found for around a $100 pretty often in good working condition.  I have shot a couple different ones over the years and they all have had nice, slick actions.

Like any vintage firearm be sure to inspect it, or better yet have a competent gunsmith look at it before shooting it. 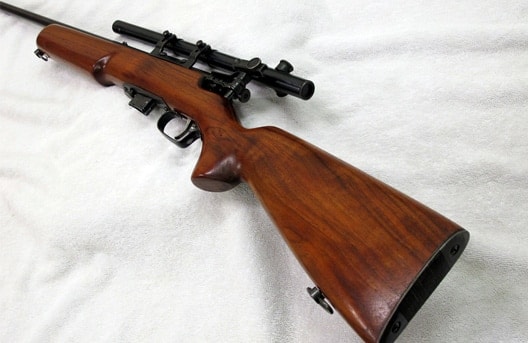 The Mossberg 42 .22 bolt-action rifle was made from 1937 to 1950 in a few different variances – for this article it was referred to as the Western Fields Model 45.  The ones sold buy Montgomery Ward’s were dressed down from the standard Mossberg’s – most were fitted with a birch stock instead of walnut.  However, the other parts are the same.

The Mossberg is a great little .22 bolt action.  They have a seven or eight shot box magazine and there are different ones for .22 short, long and long rifle.  These are pretty standard .22 bolt actions, which isn’t a bad thing.  A good .22 bolt is one of the best rifles for working on fundamentals.  Ammo is cheap and there is no recoil fatigue to contend with.

These can be found from time to time at gun shows and online auctions.  The Mossberg stamped ones tend to go for a bit more than the Western Fields.  If you are looking for a lower price on a good basic .22 bolt action, the Western Field branded Mossberg 42s are great guns.

The Marlin 55 is a bolt action shotgun and this line was sold by Montgomery Wards under a handful of different model numbers (the less sexy nomenclatures like “EMN-174”).  Most of these have a two-round detachable box magazine.  There were made in 12, 16 and 20 gauge. Marlin also made these in 10 gauge as the “Super Goose,” but as far as I can tell these were never branded Western Field.

The bolt action shotgun seems more like a novelty to us today, but they were pretty popular in the past.  Multiple makers made them and the Marlin is a quality example.  The detachable magazine is unique for sure. These are not going to replace your semi-auto or even a pump action and they were not built to do that.  What they were built to be is a strong, reliable yet lower priced shotgun.  They still are.

These are just a few of the many guns that Montgomery Wards sold under the Western Field name. The three above are good examples of what these were all designed to be — budget guns that offered a lot of bang for the buck.  From the John Browning designed pump to the lowly bolt action .22, these are firearms that still perform at a good price.

*Note: Figuring out the model numbers used by Montgomery Wards can be a major head scratcher.  It seems they had multiple numbers for the same rifle or one with only a slight change.