If you know much about pump shotguns, you’re familiar with the Mossberg 500.  The 500 comes in numerous variations.  Some of these guns, like the venerated sporting versions, seem like good ideas.  Others, like “The Road Blocker,” seem designed for Hollywood style self defense.  With so many variations out there, how could Mossberg possibly improve on the design?

Easy enough.  Build a flashlight into the forend grip.

This is exactly what it sounds like.  The Tactical Light Forend has a light that makes it more useful for tactical applications.  Thus the name.  It also makes a lot of sense for home defense.

Mossberg’s 500 line of pump shotguns forms the backbone of the companies utilitarian approach to scatter-guns.  They are aesthetically simple, overbuilt and inexpensive.  The Tactical Light Forend model just might be my favorite so far.

Mossberg is making four different versions of the Tactical Light Forend.  The differences are easy enough to anticipate.  With or without a pistol grip.  With six shot or nine shot magazine tubes.  There are more nuanced decisions, but those two will be the big ones.

This one is a 500 Persuader.  It has the full stock and a six round magazine.  The finish is a flat matte black.  It has a standard bead front sight (no sight rail) and comes with a Picatinny rail mounted above the receiver.

The light is an L-3 Insight Technology light that’s built into the polymer forend.  It has three different functions—off and on, momentary on, and strobe.  The combination is nice, as you can rely on the gun to be a flashlight (in situations where being seen is not a tactical disadvantage).  Or, if you need subterfuge or confusion, you can hit the light for a moment or activate the blinding strobe. 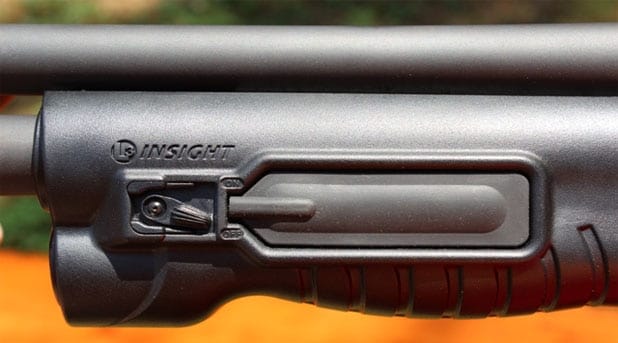 The light requires some practice.  I walked around with it for more than an hour on the property where I live before I really got super comfortable with the controls.

The grip feels remarkably solid.  The lithium battery will provide 90 minutes of continuous run time and the LED should never need to be replaced.

If there is one drawback to this design, it would be that the light shifts when the pump is moved.  This isn’t such a bad thing, though I had a hard time keeping the light on target between rounds.  I never realized how dramatic my pump motion is—and how that needed some work, light or no light.  In other words, the way the light jerked around as I pumped the shotgun simply illustrated that I was wasting a lot of time and energy reacquiring the target and acting too much.

This gun shoots like any other Mossberg 12 gauge pump with an 18.5 inch barrel.  It kicks.  It jumps.  That is just exactly what these guns do.  And if I’m not shooting it in a tactical or defensive situation, I’ve probably got a huge grin on my face.  It just feels too damn powerful.

I like birdshot as an option for home defense, especially when there are walls you don’t want to shoot through.  From 20 feet, the pattern with #8 birdshot is roughly 13 inches.  This is far narrower than the cone of light, but the light isn’t meant to be used to aim. 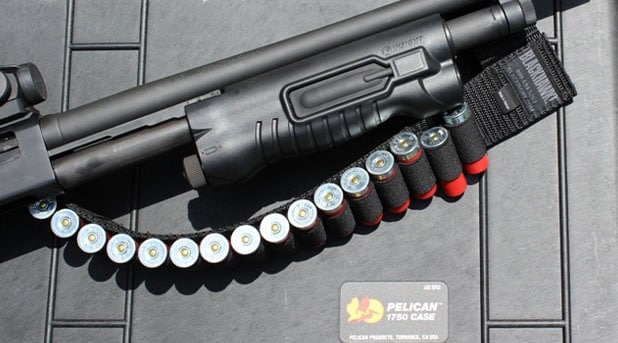 Buckshot works well, too.  There are too many varieties out there, but Hornady’s TAP, Magnum OO buckshot leaves a lasting impression.

Shooting the 500 Tactical Light Forend in the Dark

I prefer to see what I’m shooting at.  Call me crazy.  And the light helps.  The video should illustrate what this looks like.

How close is the cone of light to the point of aim?  It depends on the distance.  The closer you get, the lower and narrower the light—this is intuitive enough.  From farther away, the light is a broad wash and the 500 has to be aimed in the traditional manner.

Unless you dress it up.  I received a Aimpoint Micro T1 to test with the Tactical Light Forend.  It makes aiming in the day ridiculously easy.  The Micro T1 is better at night, but only with the light.  When the two are combined, the Mossberg 500 runs like a dream.

How could it be improved?

The only thing I’d like to do to this particular gun is change out the stock.  I’d like to see a combination pistol grip—full stock that held at least four extra rounds.  The stock on this is way more manageable than a pistol grip, but I’m sold on the combination.  The Speedfeed III Tactical Grip would be a decent addition.

Some shooting experts will hold their flashlights in one hand and their pistols in the other.  This makes sense.  While it means that shooters have to rely more on one handed operation of their weapons, holding the gun away from your body—at arms length, say—may keep you from catching lead.  The light looks like you from the other side, so the bad guys shoot at it.

That is where the strobe on this thing comes in very handy.  A solid beam is blinding—to a point.  It works best when it shines in your eyes.  The strobe, though, will disorient you.  It is so hard to pinpoint where it’s coming from.

These days, adding a light to a gun is relatively easy, so Does the Mossberg 500 really have any reasonable competition in the same price range? Some come close to matching the versatility and quality.  The Remington 870, or the Benelli Novas.

Surefire makes replacement forends that would fit on any Mossberg 500.  They run just under $300.00.  The Surefire light puts off 200 lumens.  The L-3 Insight lights usually put off 125.

Still, it is nice that the light is so completely integrated into the grip.  While the whole device is more bulky than a typical grip, there are no rough edges to get hung up on anything.  The biggest problem with most weapon lights is the angular way they hang off guns.

This is a great gun.  For $575, it is hard to beat.  Of all the shotguns in this price range, I lean toward the Mossbergs.  They’re so incredibly solid.  My first shotgun was a Maverick.  I was impressed by it.  I still am, for the price.  But then I picked up a real Mossberg.  And I would recommend the experience to anyone.