MSAR XM17 Rifle Review: A spot-on Steyr AUG clone for half the dollars

The Steyr AUG is a classic military style, select-fire rifle that has seen a huge amount of popularity around the world for decades. Steyr also offers a civilian semi-auto version of the AUG and the MSAR XM17 E4, although similar, is not it. However, for most of us it would be understandable to make the mistake in thinking that it was.

The company that makes it, Microtech Small Arms Research, was a short-lived subsidiary of the well-regarded Microtech Knives. Early this century they set out to develop and market a line of Steyr AUG clones. Their initial offering was in the standard 5.56 NATO cartridge, but later they released guns in other configurations to a limited degree. A friend of mine got one chambered in 7.62x39mm—the standard AK cartridge. This was the gun I shot and the basis for this review. 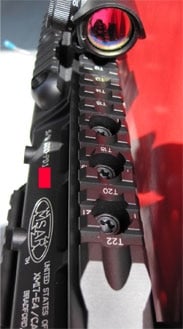 Like I said, the MSAR XM17-E4 is not a Steyr AUG, but it is still a fine rifle and the used ones available go for much less than a used AUG goes for.

The version I shot has a 16-inch barrel and had not been fired previously. For optics, a Bushnell Trophy 1×32 MP Red/Green Dot rifle sight was added onto the top Picatinny rail, a procedure that was rather frustrating to do. I found that with the scope on the rail, if not positioned correctly, would interfere with the operating controls of the rifle.

The top rail is low enough and the charging handle is positioned such that it is really easy to bark a knuckle when charging the chamber if you have any kind of optic mounted (really easy—and I just got rid of the last of the scab to prove it).

The optics need to be positioned such that the mounts are set way back, but with enough room available to use an underhand grip to pull back the charging handle. If this were my rifle, I would change out the top rail for something with a little more clearance, however, changing around the scope mounts might do the trick for most people.

But once the position of the optics was sorted out, there were minimal problems using the gun.

The bullpup design puts the ejection port back behind your face when you have the gun in the standard sighting position and that can be disconcerting for anyone who has not experienced it before. Otherwise, the ergonomics were excellent—the gun seated easily, fired naturally and recoil was minimal.

We zeroed-in the Bushnell Red/Green Dot scope and the gun shot consistent groups at 25 and 100 yards. Those groups ranged from about 4 inches to less than one, depending on which one of my buddies was shooting it at the time. It was clearly a function of operator skill rather than any problem with the gun. 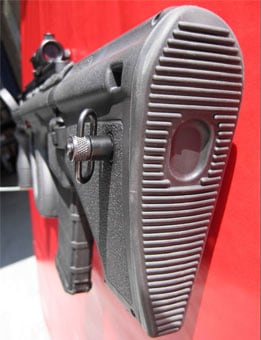 The fit and finish of the gun is quite good. This was one of the later models produced, but there have been reports that some earlier guns were a bit rough in the stock finish.

The trigger was crisp and all parts operated smoothly. There were no mechanical problems with the gun at all. And, as noted, this gun had not been fired previously. We ran about a hundred rounds through it.

The MSAR, like the AUG, is designed to be easy to switch over for left-handed use with minimal tools or additional parts. This was not tried, but looking over the gun and instructions for conversion, it seemed to be very straightforward.

Bottom line, the MSAR XM17-E4 I shot was a very nice gun. It may not be a Stery AUG, but if you happen to come across a good used one at a good price, it would be worth your while to consider getting it.