In the late 1960s, my father was trained as a Green Beret and during his service in the U.S. Army he developed a great appreciation for his 1911 service sidearm. Although he had to return his military piece, he vowed to get another 1911 at the soonest opportunity as a civilian.

A few years later in 1976, while living in Colorado Springs with my mom, he did it. He bought a MK IV Series 70 Colt, black on black, 1911 pistol—a throwback to the ones produced before WWII.

Although it wasn’t exactly the one he carried, it was close enough and it satisfied his desire to own one. Any died-in-the-wool Colt fan knows about this weapon. They were sleek, they were powerful, they were venerable 1911s, and they had “Government Model” engraved on the side.

At the time he was just buying his favorite gun, what he didn’t know or really think about is how valuable it would become.

The Series 70 came out in 1970 (if you can believe that!). At a glance, it looks pretty much just like any other Colt 1911. It features fixed sights, all metal frame, single-action only trigger, grip safety—typical 1911 features. But Colt engineers did make some design changes on the early Series 70, so it would differ from the military issue model. 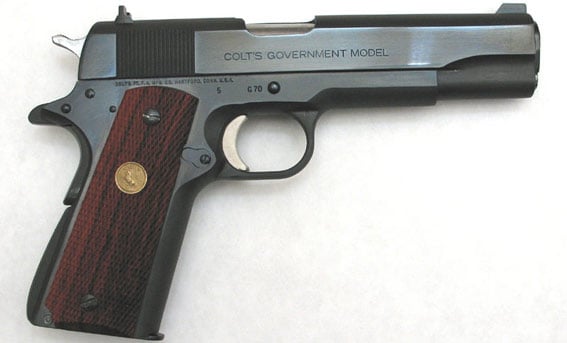 Colt radically redesigned the barrel bushing for these civilian models. Instead of their classic solid unit, designers came up with an odd-looking “finger collet” type bushing. It was made of spring steel and it actually gripped the end of the barrel, which is said to have greatly increased accuracy. Colt called this setup the “Accurizor” barrel and bushing.

While the barrel bushing may help the Colt’s accuracy, it sure doesn’t do any favors for the guy putting the gun back together after a clean and lube. One will have to invest in an aluminum barrel-bushing tool to make field stripping easier (plastic ones just don’t cut it). However, because of the bushing’s design it provides an extremely tight fit.

Like with any gun or technology, throughout the years there were more developments. The bushing went away in 1988 because CNC machining made it possible to create solid bushings with even tighter tolerances.

In 1983, Colt made the decision to include a firing pin safety and the new setup was designated the Series 80. The reason behind the new safety was to prevent the pistol from accidentally firing if it was roughly jostled or dropped when chambered. Many gunsmiths did not like the new design because they claimed it was a real bear to do trigger jobs.

Just after the new millennium, Colt decided to reintroduce the Series 70. Like its predecessor, the new guns didn’t have a firing pin safety, but internally they were still Series 80 pistols and not authentic reproductions of the famed Series 70s.

My dad’s MK IV Series 70 was the first handgun I had ever seen as a child and it, along with my dad, certainly left an impression on me. Upon seeing it, I knew then and there that I’d have to have one. At the time, I thought it was the coolest gun in the world—heck, I still think so. Now I can proudly say I am the owner of a MK IV Series 70.

And it doesn’t disappoint. The bluing on the gun is magnificent. It looks a lot better than the more matte finish on the more modern Kimber models—that’s for sure. After I gave the thing a bath and a good oiling, it looks like the Cadillac of 1911s.

The fit of the pistol is very tight, too, contrary to what Colt naysayers would have you believe. When I wiggle the gun back and forth, the only rattle comes from the grip safety; the rest of the gun is so tight it seems new.

The barrel is in excellent shape and all the parts move smoothly, which leads me to think that it hasn’t been shot a whole lot.

The sights are run-of-the-mill black jobs making its hard to see the front one. The grips are wrap-around rubber with checkering on the front strap. The magazines look like any other stock 1911 magazines.

The early Series ‘70s definitely sell for a little more than the later models do because they were the first of the “new” generation pistols. Dad said he paid $180. Today, depending on the auction and the condition of the 1911, they are going for $1,100 to $1,500, proving that these Colts hold their value.

The new brand of Colt Series 70 have an MSRP set at $993 and are as beautiful as ever, but gone are the days when we can take a trip down to the local gun shop and come home with a brand new, quality, name-brand 1911 for less than $200, but we can still enjoy the guns and their unique histories. I think that most gun enthusiasts have one specific make or model that is close to their hearts, and this Colt is no exception for me.