North American Arms came out with the Guardian .380 ACP handgun about a decade ago, after a fair amount of success with their .32 ACP version a few years earlier. It was a good decision, in my mind, because the .380 ACP cartridge is significantly more powerful and suitable for self-defense over the .32 ACP.

In many regards, the NAA Guardian .380 is very much like the other ‘micro .380s’ on the market, such as the Kel-Tec P3AT or the Ruger LCP. It is about the same size overall (being just a bit shorter, with a slightly shorter barrel) but has the advantage of being about twice the weight. 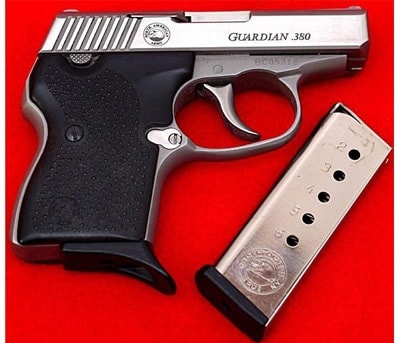 Yeah, you read that right. I said that it is twice the weight of the P3AT and the LCP. Those polymer guns weigh in at 8.3 ounces and 9.4 ounces respectively (unloaded). The stainless steel NAA Guardian .380 is a whopping 18.7 ounces.

Sure, it’s a lot to carry concealed in a pocket. But it has a huge advantage: recoil management. The NAA Guardian’s weight sucks up recoil much, much better. Meaning that you will be able to get follow-up shots much more easily. That, and it will be less painful to shoot at the range in order to acquire and maintain proficiency.

Now, I’m not against lightweight guns entirely. My pocket J-frame weighs just 13.3 ounces. My Rohrbaugh is even lighter. But you have to be honest about how extremely light guns make it more difficult to control recoil. When you combine very lightweight and really small grips, it can make it difficult if not almost impossible to accurately shoot a gun, particularly if you have large hands.

Anyway, let’s talk about the NAA Guardian specifically. As noted, it is very small, and the 2.5-inch barrel means that the ballistic performance of the .380 ACP cartridge is marginal but acceptable if you do your job in terms of accuracy.

It is well made. The weight comes from the fact that it is all-steel construction and the engineering is very solid overall. Fit and finish are pretty good, significantly better than in its polymer competitors. The stainless steel finish stands up well against use and the rubber grips help make it easier to hold onto the gun. But custom grips are available, too, as is a finger extension to the standard magazine, which makes it much easier to hold the gun solidly.

Like many small guns intended for self-defense purposes, the NAA Guardian .380 doesn’t have an external safety. Like most such guns, it relies on a long, relatively heavy Double Action Only trigger. This isn’t bad, but the heavy trigger pull (about 10 pounds) can be difficult if you have weak hands or very large hands, which can cause the pistol to rotate slightly in your grip. In both cases, you should make sure that you try the gun before buying it and then get sufficient practice with it so that you can make any corrections necessary in order to shoot it well.

Standard sights are minimal, low-profile blades as part of the top of the slide. In the past NAA has offered different options, such as just removing these or removing them and then installing what they call “Gutter Snipe” night sights. Currently these options are not available, though NAA’s website says that they will be offered again later this year. I found the standard sights perfectly adequate for short range shooting (out to seven yards). However, because my hands are very large, I had difficulty shooting the gun with any real accuracy (about an eight-inch group at seven yards), but others in our group were able to get four-inch groups at that distance consistently.

Overall, I was impressed with the NAA Guardian .380. It is too small for me to personally consider it, but I thought that it would be a good option for someone else who had smaller hands and wanted a pocket .380 — one that wouldn’t be abusive in terms of recoil. 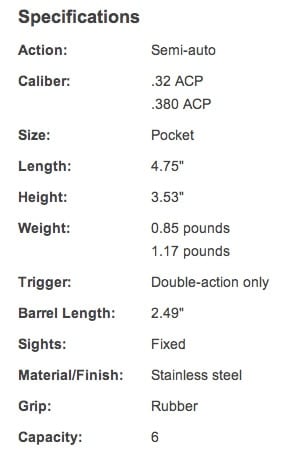