Most people who are into guns know about the Colt Single Action Army – more commonly referred to as the Peacemaker – it’s a six-shooter with a loading gate on the side.

But there was another gun that came out around the same time as the SAA and was more popular with certain gunfighters – Frank and Jesse James, John Wesley Hardin, to name a few – for the simple reason that it was faster to reload.

The Smith & Wesson Model No. 3 was a break-top revolver that also held six rounds, but allowed for emptying the entire cylinder quickly. 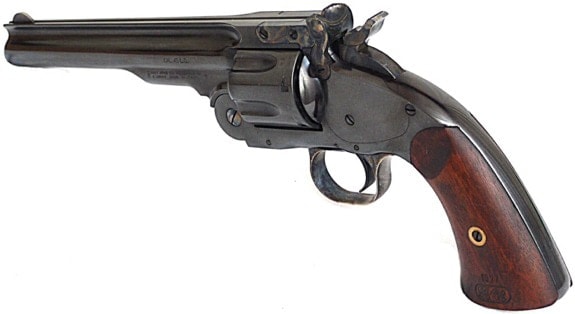 And one modified version of the Model No. 3 came to be known as the Schofield, named after Maj. George W. Schofield, a cavalry officer who liked that the gun could be opened one-handed and easily reloaded on horseback.

The gun was initially offered in a proprietary .45 Schofield cartridge configuration, but reproductions today are usually made to accommodate the slightly longer .45 Colt cartridge. Ballistics By The Inch tested one such, a 3.5-inch barrel gun made under the name Navy Arms, for ballistic tests of the .45 Colt.

The Navy Arms guns were actually made by Uberti. Navy Arms no longer offers them, but you can find the same guns offered directly by Uberti. They are available in 3.5-, five- and seven-inch models, and you can choose between .38 Special, .44/40, and .45 Colt. 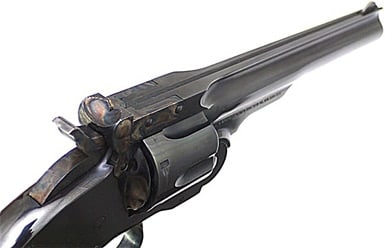 The 3.5-inch model is called the “Hideout,” which may imply that it would be a suitable gun for concealed carry. And I suppose that it served that purpose in the past, but at 2.4 pounds in weight, and with a full-sized heavy frame (envision about an “N” size frame by today’s standards), I suspect that most people could find another gun to carry that’d work better for them. But to each his own.

Still, the Navy Arms Schofield Hideout is a pretty nice gun. The quality of this reproduction is quite good and knowing Uberti’s standards these days I’m sure recently-made versions are just as good.

The gun has a simple half-round front blade sight that can be ‘adjusted’ with a hammer or file if need be. The rear sight is a very basic notch and, again, adjustable with a file. But while these are not, and were not, intended to be target guns, the sights provide for quick target acquisition and adequate accuracy. 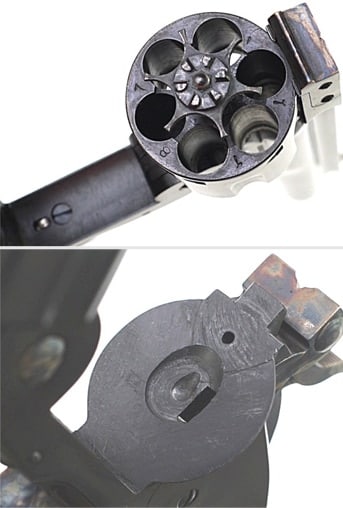 The fit and finish on the Hideout was pretty good. Nice, deep bluing. A bit of ‘case-hardened’ color on some of the fittings. Nice, if unadorned, walnut grips. The break-top mechanism operated pretty smoothly, and did a good job of ejecting the spent cases. The trigger (remember, single-action only, so the hammer has to be drawn back by hand before firing) was smooth and fairly light.

Recoil wasn’t bad, but I found that the shape of the grip meant that the gun wanted to rotate back in my hand more than I expected. This is probably something you would become used to fairly quickly, or could modify with a different set of grips if you found it to be too much of a problem.

Accuracy was perfectly acceptable out to about 10 yards – I’m talking about a four-inch group. I’m sure with a little practice a six-inch group at 25 yards would be within reach of most competent shooters and maybe even me.

If you’ve never had a chance to shoot a top-break revolver, you certainly should take advantage of the opportunity if it comes up. It’s kinda fun to have the spent cases pop out like that. Otherwise it isn’t much different than shooting any conventional side-opening modern revolver.

If you see one of these Schofield revolvers, check it out. The ones made by Uberti (even if they have the Navy Arms name on them) are good quality connections to a bit of our past, and quite enjoyable to shoot. MSRP is $1,009.