Glocks are like King Arthur’s Excalibur in reverse. They’re handguns that fit just about everyone. The reasons to own a Glock far outweigh reasons not to own one.

However, as the company introduces more models under the Glock Gen 4 moniker, this year it’s coming out with three (Glock 21, 32 and 34), it may pull in the stragglers…

Glocks aren’t for Everyone

“Did you see that? He picked up the Glock. He secretly wants to shoot it.” Jim said, pointing and smiling at me. “It’s OK. We know you really want to give it a try.”

“One of us! One of us!” chanted Keith, who stood beside him.

“Yeah, OK, I’m curious,” I said, turning the new Glock over in my hand, examining it. 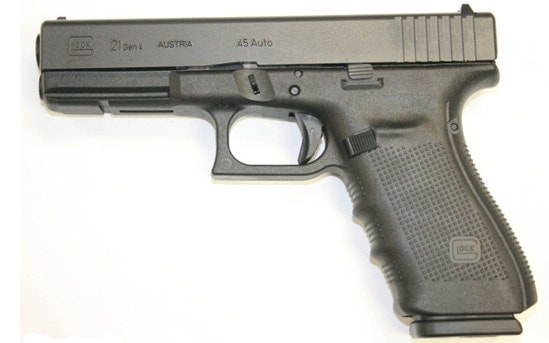 The truth is, I was curious. I knew that Glock had changed a number of things about the gun with the introduction of the fourth Generation model (or Gen 4 as they call it), as with the rest of their line. I hadn’t gotten around to trying any of the new guns yet. But my friends knew my bias against Glocks.

Oh, I think Glock makes good guns. There’s little doubt of that in my mind. And they’ve had a profound effect on the modern firearms industry. But I just don’t like them.

To clarify, I don’t like shooting them. I’m just one of those people for whom the ergonomics of the Glock design doesn’t really work. It always feels like I’m holding a brick and trying to shoot it. They don’t point naturally, they don’t feel right in my hands, and I have a hard time hitting the broad side of a barn with one. A shame, really, since I do think that they’re good guns, incredibly reliable, and they’re reasonably priced with plenty of accessories available.

My friends knew this. But one of them had just gotten the new Glock 21 Gen 4, and wanted to give it a try. I wanted to see whether the modular back-strap system would change the feel of the gun at all in my hands. 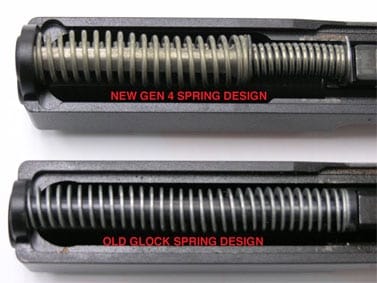 The Glock 21 is a full-sized .45 ACP pistol, generally considered to be a ‘duty’ gun. It holds 13 rounds, has a 4.6-inch barrel, a full-sized grip, and weighs 26 ounces. All around, it is a quality gun, though the emphasis is on function rather than looks. The sights are good, the trigger decent, and the fit and finish up to par. You know what you’re going to get from a Glock.

Keith (who is a Glock-certified armorer for his police department) took the gun from me, quickly disassembled it while giving me a run-down on the changes of the Gen 4 model: a more aggressive grip texturing, larger (and reversible) magazine release, and the aforementioned back-strap system.

But the biggie was the redesigned recoil spring assembly, which has an inner and an outer spring (captured together). He held it up, said “this makes it the softest shooting .45 I’ve ever tried.”

Quickly reassembling it, we loaded up magazines and gave it a try.

How was it? Well, keep in mind that, as I said, I don’t care for Glocks generally.

I have large hands, bigger than either of my friends’. But counter-intuitively, the smallest profile back-strap was the one that felt the best to me. The ergonomics were much the same as the older Glocks I had tried, but for whatever reason it was easier for me to accommodate the shape of the grip with the lower profile back-strap.

And yeah, the recoil was mild. Very mild. Even though we shot first target ball ammo, and then full +P self-defense rounds, it felt like my mild practice reloads out of a full-sized 1911. Between the different grip and the recoil, it was easy for me to hit the target with my first shot and with subsequent follow-up shots.

Final Thoughts: In Glock We Trust?

After I went through a couple of magazines, I could tell that the ergonomics were still not quite right for my hand – the recoil did tend to focus on an odd place at the base of my thumb. But for the first time I could actually see myself owning one of these guns.

I’m going to have to give some of the other Gen 4 models a try, see if they offer the same (or similar) shooting experience. I don’t mind having to change my mind about me and Glocks. Don’t mind at all.