Smith & Wesson expands the concealed carry market with The Shield

Smith & Wesson invited Guns.com and a handful of other firearm publications out to its factory in Springfield, Massachusetts, for a glimpse at their latest concoction: the Shield. It’s a new, innovative 9mm edition to the M&P line of duty pistols.

The idea of the Shield was advertised in a vague Youtube video at the beginning of March and many Smith fans had a good idea of what the Shield was going to be — a subcompact 9mm pistol — seeing as numerous manufacturers have been heading in that direction. The struggle for most companies seems to be striking the right balance of quality and price. Well, it seems as though, with the Shield, Smith has struck the right chord.

Although the Shield is not a pocket pistol per se, if inside a cargo pocket or jacket it won’t print as noticeably as you would think. At less than an inch thick it is easily concealable, but the ideal method of carrying the Shield would be in a holster, likely on a belt and under a shirt.

And probably the most interesting aspect about this gun isn’t that it’s comfortable, reliable and fun to shoot (because that was somewhat expected), it’s that Smith, in collaboration with numerous accessory companies, are logistically prepared to sell it. Before such a collaborative effort was unheard of as they’re all afraid of losing proprietary information.

Smith & Wesson Director of Marketing Paul Pluff explained that just weeks after the release date the gun will be in stores and so will holsters made by Blackhawk, DeSantis Gunhide, Fobus, Galco, Uncle Mikes and Pistol Wear, as well as alternative sights made by Crimson Trace, Hi-Viz, Laserlyte, LaserMax and Williams Gun Sight Company. 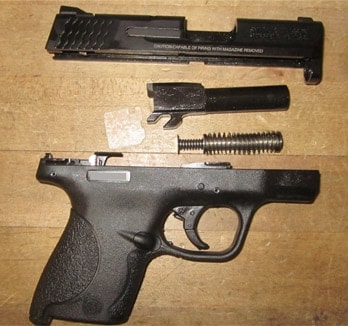 Pluff also stressed that Smith & Wesson considers the Military & Police line their premier line of duty pistols. All of the M&P handguns have similar controls and aesthetic features such as grip texture and Melonite finish, but the brand has also gained a favorable reputation by gun owners.

It’s a popular choice for many competitive shooters and police, and most reviewers have praised the M&P line for their reliability and also durability. In the most extreme case, there was an endurance test performed by a third party where, over several months, a M&P9 shot more than 60,000 rounds before it was determined to show signs of severe wear (a crack in the slide). Although the gun still worked, the decision to end the test was made by the party’s legal counsel.

During the presentation, Pluff compared the Shield to the S&W Bodyguard because they are both subcompacts.

“The Bodyguard is good for what it is, however, it just doesn’t meet M&P standards,” he added.

The company thinks people will compare the Shield to the M&P Compact because that’s the closest M&P in size, but it isn’t necessarily a fair comparison, Pluff said. The Shield was designed for maximum thinness, meaning it had to be stripped down.

How the Shield differs from other M&P pistols

If you peruse the M&P line in Smith & Wesson’s catalog you would notice that there are numerous combinations of sizes, controls and calibers. Starting off, the Shield will be limited to single sided controls only. 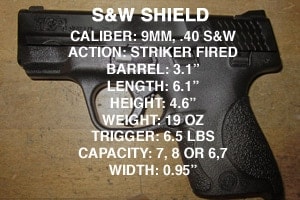 The goal was to keep it under an inch wide, Pluff said. As is, the frame is 0.95-inches wide, so if it had ambidextrous controls that would push it passed what was originally intended.

The controls are also flattened, but still easy to manipulate. It’s equipped with a manual safety, which Pluff referred to it as a passive safety, meaning that it is a tiny lever on the rear of the gun and is difficult to engage unintentionally.

The Shield has an overall length of 6.1 inches, 4.6 inches in height and weighs 19 ounces unloaded. It allows for a comfortable two-finger hold, but it comes with two magazines, one of which is extended. Again, one of the biggest selling points of this gun is its width — less than an inch in thickness goes a long way in terms of concealment.

The best way to describe the Shield’s accuracy is you can hit you’re target without even aiming. The gun is designed with an 18-degree grip angle, which is what Pluff said S&W engineers figured out to be the ideal angle for a person to comfortably hold the gun, find his or her natural point of aim and control the gun while shooting.

My results were passable. My aim was center mass and the impacts were acceptable, meaning in the center of the body.

Later during the presentation we were allowed a slow-fire range day, so more scrutiny could be put on the gun. And the Shield is just as accurate as the person shooting. The three-dot sights were just as familiar as any other. I was also able to use the Hi-Viz, but they weren’t my favorite. I typically like fiber optic sights, but only the front. That’s my only criticism.

At about seven yards my groups were around two- to 2.5-inches wide, but other shooters, at the same range, were able to put a hundred or so rounds straight through the bull’s eye.

More importantly the felt recoil on the Shield was incredibly mild. There was more of a pushback than flip. Like I said, it was fun to shoot compared to the other subcompacts, which leaves my hands stinging. Realistically, the Shield could be a range gun.

The idea behind the Shield is that it could fill the needs for anyone looking for a concealed carry pistol. The Shield comes with two magazines—one that holds seven rounds and fits flush with the frame, and an extended mag that holds eight—it has medium-sized palm swells, which is what was found to be the most commonly used, and it costs $449.

Pluff added that the Shield will also be available in .40 S&W shortly after the 9mm version hits stores. In fact, S&W has almost already completed filling its first batch.