When it comes to ammo, you can’t do much better than Nosler.

It’ll perform better than most shooters. The bullets are smooth and hollow, and will put down most game. The brass are solid and polished, and will extract effortlessly.

Guns.com looks at how well the Nosler Custom Competition Match Grade .308 ammo does when paired with a dependable, all-purpose Ruger rifle and a top-notch Leupold scope.

Reporting on ammunition is difficult. I pull the trigger—if the gun goes boom, it is difficult to tell how well it performs without some complicated gauges and lots of math. And I’m really bad at math.

All too often, I take the manufacturer at their word. I parrot what has been said about ballistics data. If the gun functions reliably, and I hit what I am aiming at, then I don’t stress over the ammunition.

But not today. Today I want to talk about the good stuff—Nosler’s Custom Competition Match Grade .308.

Nosler’s ammunition is the best. That’s a fairly considered opinion. I’ve been on a .308 rampage lately and I’ve shot the full gamut of commercially available ammunition. While I would have a hard time quantifying the exact performance of Nosler’s .308 with that of Hornady, for example, there are notable differences. 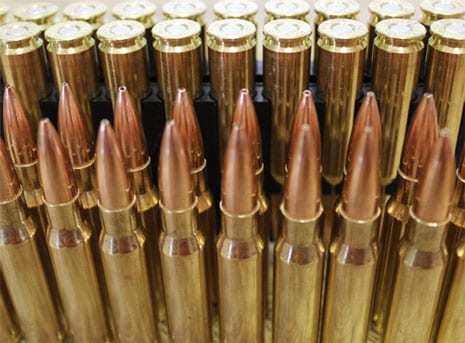 I’m a bit of a snob about my metals. I do some blacksmithing and castings in bronze and iron. I recognize good alloys, and Nosler’s brass is good. The cases are all polished out to a bright shine. This slick surface helps with feeding and extractions.

The cases are also noticeably heavy. The stout brass makes it easier for Nosler to size and true the necks. It also means that the empties are perfect for reloading.

The 168-grain bullets on the Custom Competition rounds are hollow points, though you have to look close to see it. The copper jacket wraps almost all the way to the tip and is very sharp. That said, the copper holds its shape well. I fed and extracted a whole magazine through the Ruger Gunsite Scout, running it hard, and didn’t deform any of the tips.

Inside the jacket is a lead alloy core. The whole package is boat-tailed for better aerodynamics. That’s not too surprising, but the bullets are all made on dedicated machines and tracked so that production lots don’t get mixed—so if something isn’t exactly right, they can trace the problem back to its source. 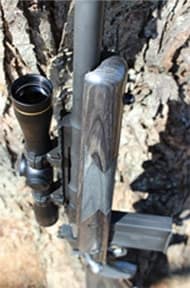 For these tests, I shot a Strum Ruger Gunsite Scout Rifle. Ruger’s new .308 has a short barrel and isn’t a sub MOA gun, but shooting the Gunsite Scout with a Leupold Mark AR 4-12×40 Scope, I was able to put a group of five in a 0.8-inch hole from 100 yards. It is the best I have ever done with a rifle.

The average of ten groups was 1.2 inches.

This average is significantly better than the best group from my previous attempts. Shooting Winchester Silver Tips, under similar situations, my best 100-yard group came in at 1.4 inches. 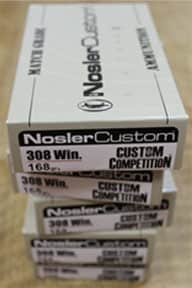 At 200 yards, I had a harder time. My best came in a 1.5 inches—an inch tighter than with the Winchester.

At 300 yards, the groups widened out to two inches. Not bad for me (not bad for most). And I think it had everything to do with the rifle I was shooting, and the varied terrain over which I was shooting and the early spring breeze that was anything but predictable.

Is the Nosler that much better than the Winchester, or Hornady? Maybe not. I was using the same rifle, but a different scope. The difference could be accounted for by wind.

But I know this: shooting with the Nosler could not have been any better. I spent the better part of an afternoon working through the ammo they’d sent for us to try. At the end, I am a convert. At a $1.25 a shot (if you’re buying them in a box of 20), the Nosler is too expensive for plinking. But Nosler sells more than ammunition. They sell confidence. When you chamber a round, you know that part of the complex equation is perfect.