Gun Review: Don't turn your nose up at the Hatsan Optima SB-W shotgun

When a person buys a gun they usually have a specific purpose in mind for how they intend to use it and usually a price range. Sometimes they want new range toy that works dirty and spits out cheap ammo, or a home defense tool that’s simply dependable and intuitive, or a rifle powerful enough to drop an elk with one shot from 400 yards out.

For me I set out to find something I could use to hunt grouse in heavily forested areas. I figured I needed a shotgun that’s slim and maneuverable, has a sturdy barrel and is lightweight — you know, something I could carry for eight hours without much strain. After weighing my options, I chose the economically priced Hatsan Optima SB-W 20 gauge shotgun because it seemed to offer everything I wanted. Now you might be wondering, “Did it?” Well, read on…

The manufacturer of the Optima SB-W is Hatsan Arms, the firearms division of a Turkish business. This is not a company like Colt or Browning who display their exhaustive history to anybody who wants to look or listen and has their own mythology in the gun world. No. Hatsan’s profile is more in line with Taurus. They’re a machining conglomerate that can produce firearms almost self-sufficiently. Also like Taurus, Hatsan’s firearm division seems to have made their mark by producing fairly-priced clones of well-known firearms. 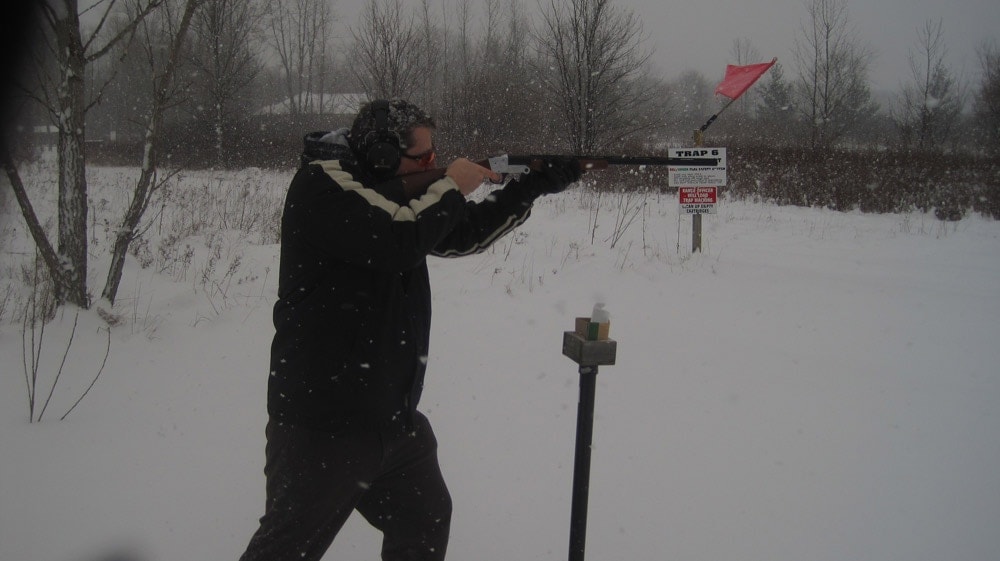 The Optima SB-W certainly fits into that category.  It competes in a category of guns with the classic and widely-owned H&R Topper, and comparisons are unavoidable. The break-open shotgun is about as simple as it gets for a modern firearm today, and they are still in broad use in farms and fields. Affordability, functionality, and performance are the name of the game with these workhorses.

SB-W’s are available in 12, 16, 20 gauges or .410 with barrel lengths from 20- to 30-inches, all with a vent rib and a handful of basic characteristics. A 3-inch chamber, extractors, engraved chrome-plated receivers, Turkish Walnut stocks and fore-ends, fixed cylinder choke, a gold bead front sight and swing swivels.

Out of the box, I have to say my model — a 20 gauge with the 26-inch barrel — is a classy-looking little shotgun. I consider it prettier than the Topper and when it sits on a rack at the trap range next to tacticooled Mossbergs and fugly-but-indestructible Novas, it looks even better. There are some minor blemishes out of the box with the finish in corners, but if you let that distract you too much than it was never the right gun for you.

In function, the gun breaks open by pulling the trigger guard back. It works quite well and lets the shotgun retain clean lines. The trigger guard is plastic but thick and durable (you’d have to try hard to break it). Opening the action reveals a basic extractor on the bottom. Some might prefer the ejectors but in the field, I find the extractor means I won’t have to spend time hunting for hulls. Ejectors also seem to be the only thing on this style of shotgun that fails, so I consider this downgrade from the Topper a plus. 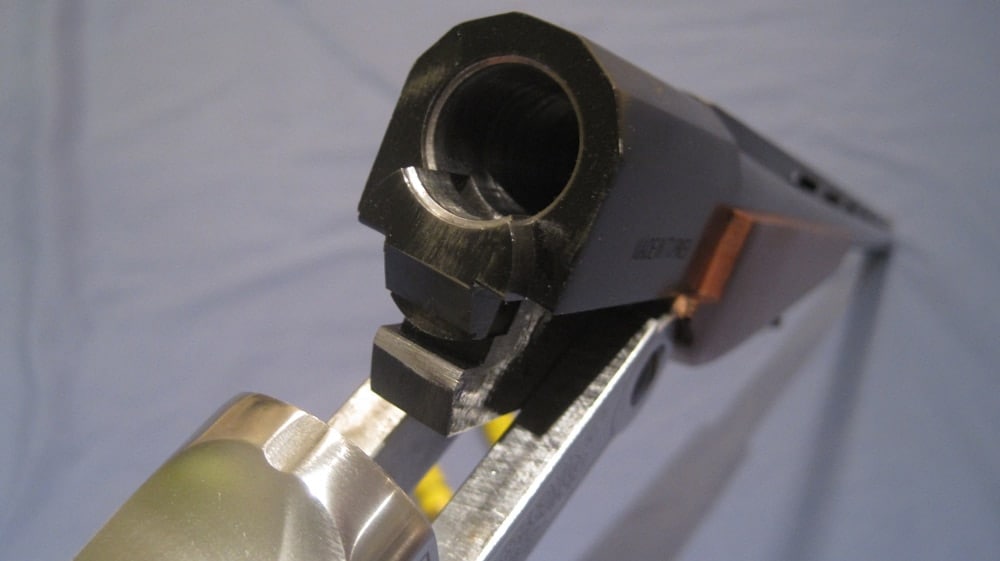 So that’s what it looks like. The open action of the Hatsan Optima SB-W. (Photo credit: Andy)

The butt end of the shotgun has a cheap-looking brown plastic plate. For a gun that looks so nice overall, this is a jarring inclusion since it’s just so ugly. It would have been great to skip the engraving and install a recoil-reducing pad, or even just a nicer-looking metal plate. But this is another nitpicky cosmetic complaint.

One criticism that’s less nitpicky is about the swivels, or lack thereof. These are cheap sling mounts screwed into the gun, and if they’re swiveling, they’re breaking or unscrewing themselves from the gun. Additionally, the loop to accommodate the sling is narrow and none of my slings fit. It’s the one feature on the SB-W you pretty much have to replace if you plan to use it seriously.

Shooting the SB-W Optima is exceptional. Mine has gone bang 100 percent of the time I’ve pulled the trigger on a live shell. And I have had zero issues with the extractor after about 500 rounds (a mix of 3- and 2 ¾-inch hunting loads and 2 ¾-inch trap loads). The action release is smooth; the barrel doesn’t rudely drop down and slap you. It eases itself down and presents the spent shell with good manners.

It patterns as you would expect a 20 gauge with a cylinder choke to pattern. I hit what I point at if I’m doing my part, and the Optima has accounted for a good number of clays turned to orange powder despite being anything but a well-tuned trap gun (and myself being anything but a well-trained trap shooter). In the field, it’s been a great replacement for my 12 gauge pump shotgun, weighing in at 2.5 pounds less and with considerably less bulk.

Small break-action shotguns like this Optima can be a bit stiff recoil-wise, so I purchased a Butler Creek slip-on recoil pad. Before I added this piece of plastic I would rarely shoot more than one round of trap per range session because it was so uncomfortable. At $18, the pad was a worthwhile investment. While the fit isn’t snug and frankly it looks like poop, it works. I’d have happily sprung for a more permanent recoil pad, but Hatsan Arms aren’t on the radar of many secondary-market producers, so there’s not an easy-fitting Limbsaver for the Optimas yet. 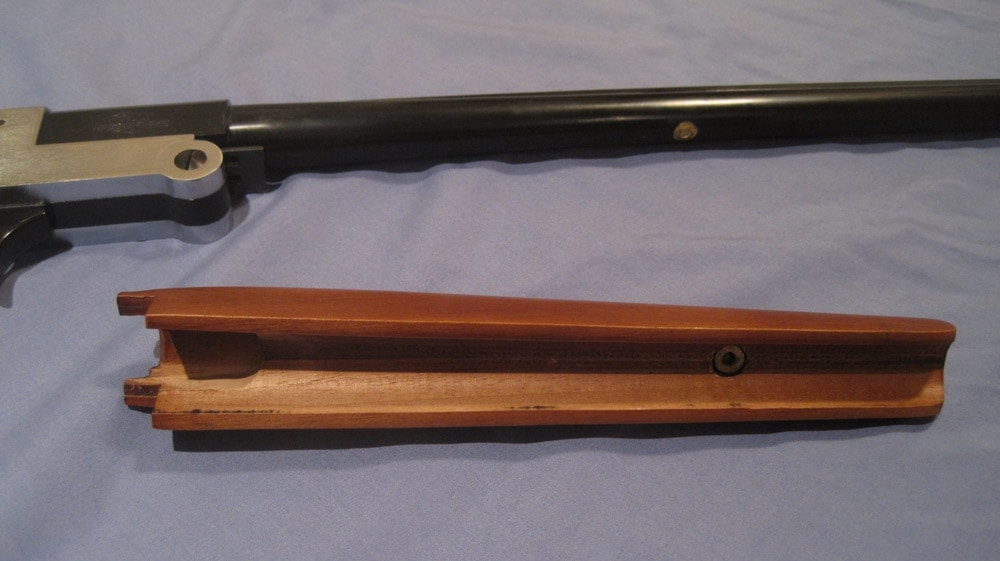 The forearm snapped off the shotgun while Andy was shooting trap. Needless to say, he was disappointed.  (Photo credit: Andy)

However, in reliability, there’s a snag. I’d be dishonest not to bring up what may be a deal breaker for some. The forearm snapped off the shotgun once during a round of trap shooting.

While this sounds like a disastrous failure, in the interest of fairness I was shooting a round of trap alone, meaning the gun was being fired fairly quickly, on one of the coldest days of the year. On top of that the forearm is held on with solder and the contact point is pretty small. I imagine the combination of the cold ambient temperature and heat from being fired repeatedly did a number on that small contact point.

However, given the details of the incident I see this issue as an example of using the gun outside its intended purpose and in adverse conditions.

(Note: I would also be remiss to say Hatsan has not been very good about warranty, but the problem has been resolved.)

For around $165, the Optima is a fair purchase. One that will fulfill the needs of any trap shooter or grouse hunter. If you want a general purpose homestead or bush gun, the Optima fits the bill right next to the H&R Topper. And when given a choice between the two, I wouldn’t turn my nose up at the Optima.