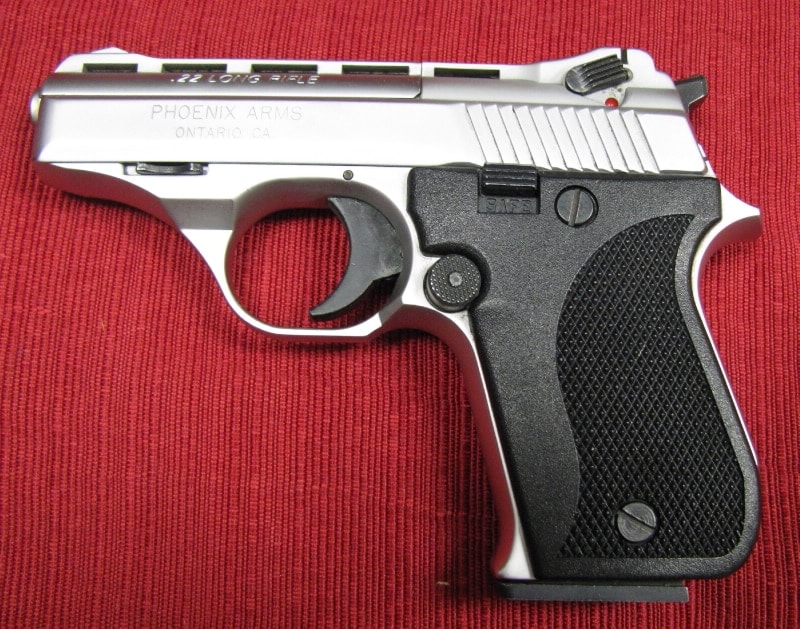 You know, for what this little gun is and what they go for, it’s not bad at all. That doesn’t sound like much of an endorsement, does it? But this is a case of you get what you pay for and should adjust your expectations and judgment accordingly.

Going for about $150 new, you can frequently find a Phoenix Arms HP22A for about a hundred bucks used. These days, that ain’t a lot of money, but for it you get a decent little gun.

The little HP22A from Phoenix Arms is the modern product of the heir of the old “Ring of Fire” firearms companies such as Jennings and Raven Arms, which produced inexpensive, poorly made small guns decades ago. In comparison to those guns, the HP22A is a vast improvement.

We had a new one to test as part of the Ballistics By The Inch .22 tests and I was honestly surprised at how well it functioned — well, once we figured out how to make it function. 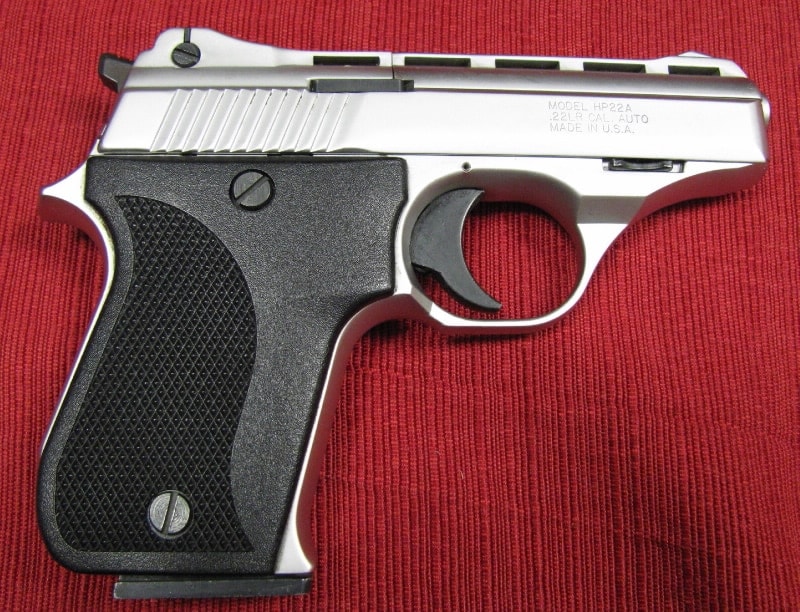 The problem is that the HP22A has a dual manual safety system, which messes with how the magazine works and whether the gun will chamber a round. There’s a firing-pin block on the upper slide and there’s another safety on the upper grip panel on the left of the gun that Phoenix describes as a “magazine interlock.” You have to have the “magazine interlock” in the correct “safe” position to even detach the magazine. And while you can rack the slide with the “magazine interlock” in the “safe” position, it doesn’t actually fully cycle and will not load a round into the chamber. Once we had gone over the instruction manual for the gun and got this sorted out, everything was fine.

But the “magazine interlock” is still a bit of a PITA. Anyway, while the HP22A is fairly small (slightly larger than a P3AT/LCP) it weighs 20 ounces (with the 3-inch barrel – 23 ounces with the optional 5-inch barrel) and so sucks up recoil quite well.

The fit and finish are just so-so. Seriously, this is an inexpensive gun and it shows. Most of the thing is made of cast zinc and aluminum alloy, and the castings are rough and somewhat unfinished. The grips are plastic and the external finish on the one we had was a brushed aluminum. It isn’t going to win any beauty contests. 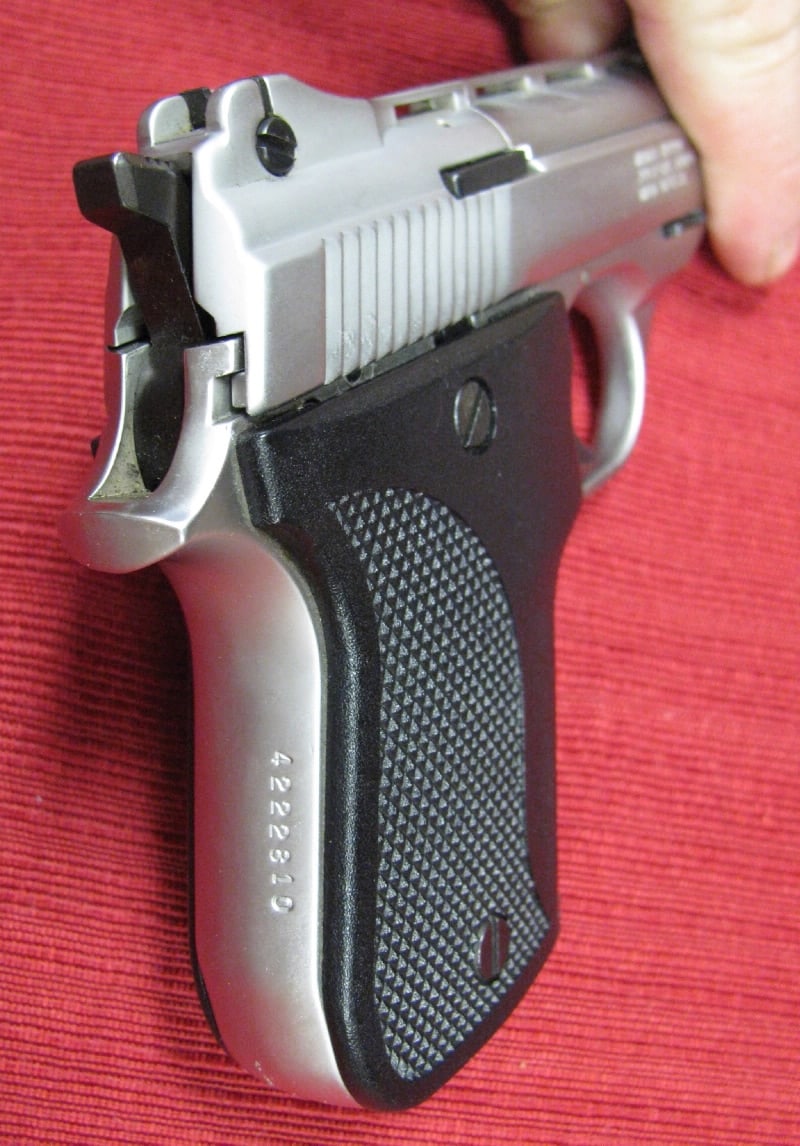 But it worked. Worked surprisingly well, actually. The 3-inch barrel gave good, solid numbers in terms of bullet velocity, right where you would expect them to be on the data curve. We didn’t have any major problems with it failing to cycle or getting light strikes on ammo (which can be a common problem with brand-new small .22s before they break in), or anything like that.

The trigger wasn’t bad either – crisp, not too hard nor too rough. And I’m sure that it would get even better with use or with a little judicious buffing on the internals. In fact, the whole gun would benefit from such attention, but right out of the box it did fine.

Accuracy was decent out to 10 yards – say about a 4-inch group – all that I would ask of such a gun. 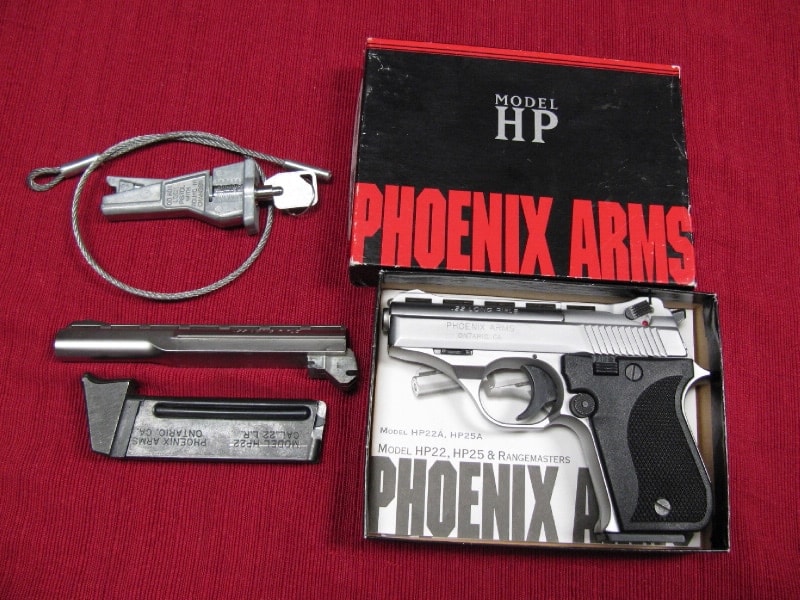 Like I said, it’s not a fancy or particularly well-finished gun, but it works pretty well. And the quality is head and shoulders over the little Raven Arms .25 I got about 35 years ago.