So we’ve run a few pieces recently about the death of the AK, long live the AK, etc. One of the things that makes the AK somewhat less popular than the Western standard combat rifle is the lack of direct mounting options for non-AK optics. Yeah, you can use that side rail and yes, it will work fine with Russian collimator sights and POSP scopes. That’s granted.

But the U.S. has nothing if not an abiding love for personalizing gun accessories. We appreciate and respect the rugged yet somehow elegant AK platform, but it, well, you know, doesn’t have a damn flat top rail. 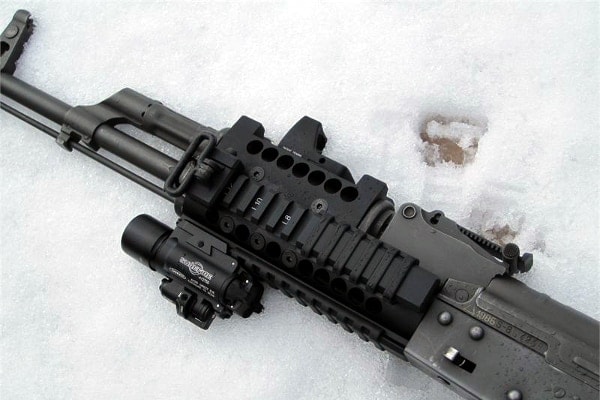 There are a handful of mounting options, great ones, like the Ultimak gas tube rail which is impressive on its own, but few companies have devoted quite so much to the AK optic-mounting craft as Midwest Industries with their multiple quad rails tailored to fit all varieties of Kalashnikov, whether they’re the original make, or produced in Poland, Bulgaria, or Hungary.  Midwest Industries even makes an extended one for use on Saiga rifles.

They also make extremely short rails for Krinkov and Yugoslavian M92 pistols and short-barreled rifles.  If you’re looking for a way to bring a Kalashnikov into this century in the fastest and most tacticalicious way, a Midwest Industries rail is a safe bet. 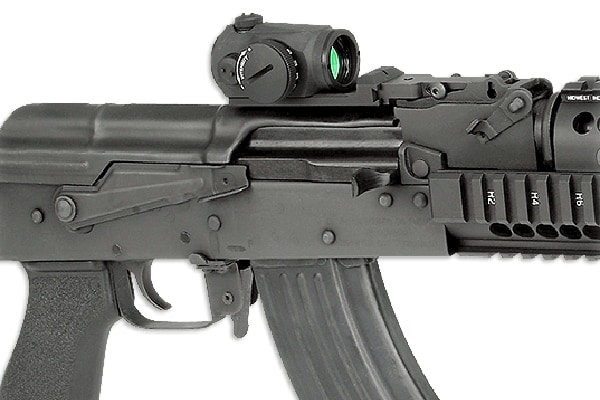 And for “co-witness” fans, the two-piece rails have optional optic-specific top halves that sling any of the following glass right into place just above (but not touching) the gas piston: Trijicon RMR, Leupold Delta Point, Burris Fast Fire II, Aimpoint T1 Micro, and Primary Arms Micro dot.  They also make upper rails scopes and for MRDS and Vortex Spark optics, although they don’t necessarily co-witness.

But maybe that’s all just too much tacticoolness for such an iconic rifle, and you don’t want to ditch the hand-carved, traditional furniture of your AK in for a bunch of hard-anodized crap, even though you still want to mount a more practical optic on your rifle and avoid its ridiculous iron sights.  Top-cover rails aren’t your thing, either. 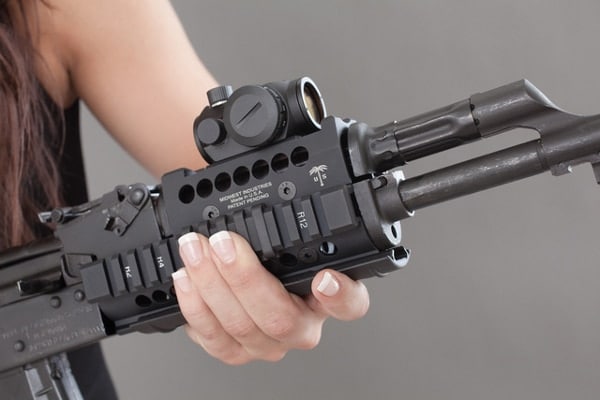 Midwest Industries, sensing this, has made an extended, Krinkov-inspired rear sight that mounts for optics on the sight leaf itself while still being usable as a (drift-adjustable) rear iron sight.

Russia may believe that it’s time to find another battle rifle, something more modern, like the Nikonov AN-94.  Well thanks to Midwest Industries, our old AKs are holding up just fine.  And Midwest Industries won’t eat your wallet for the parts, either.