Last summer, as part of the Ballistics By The Inch .22 tests, I had a chance to shoot the Pietta Puma PPS-50, a .22-caliber carbine based on the design of the classic Soviet PPSh-41 from World War II.

My full review of the gun ran earlier this year and I concluded that the gun was ok, but that’s because we encountered problems with the drum magazine. And since all we had available during the tests was the drum magazine that kinda spoiled the whole experience of shooting the Puma.

Recently I had a chance to revisit the PPS-50, but this time I had both a 10-round and a 30-round stick magazine for it. And what a difference it made. Oh, the gun had also been more broken-in and thoroughly cleaned by the owner, which probably made a big difference as well.

As I noted in my previous review, we had some problems with some light strikes on some of the cartridges. As I noted then, “…we figured this was likely due to the gun being fairly unused and needing a break-in period (a not-uncommon problem with .22s). In doing some checking online confirmed that this is a known minor problem with these guns new, and usually resolves itself after a couple hundred rounds and a thorough cleaning.” 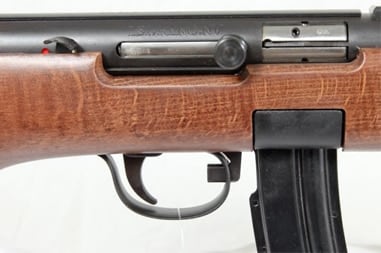 This seems to have been exactly the case. While I didn’t try to run through as many different types of ammo as we did during the BBTI tests, the Puma ate everything I put into it this time around without a single problem.

Combine that with not fussing with the drum magazine, and the shooting experience with the PPS-50 was entirely different. Not having to drop in each cartridge individually meant that I got to see how well it handled in rapid fire and pay more attention to how well the gun shot rather than just what was wrong with it.

And how did it shoot?

It shot well. I’m a huge fan of the Ruger 10/22, but this little carbine was just as nice a shooter. The trigger was even smoother than previously, having been used more. Target acquisition was quick and easy. The gun stayed on target with no weird jumping around.

My previous guess that the gun would maintain good grouping out to longer ranges held up to testing, as I was able to get about a 2-inch group at 50 yards shooting freehand while standing. That’s about the limit of my ability and I’m reasonably comfortable that a better shooter would find the carbine up to snuff. 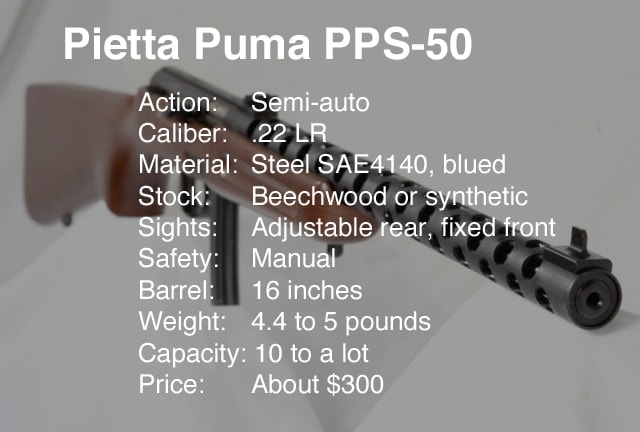 While the gun had been shot more in the intervening months, it hadn’t been handled roughly or anything, so the finish was still in like-new condition. Which is to say that everything was still excellent and very attractive – normal use hadn’t raised any problems.

If previously I would have awarded the Pietta Puma PPS-50 some 3.5 stars out of five, now I’d move it up to 4.5. That is, if you just forget that the damned drum magazine exists and stick with the other magazines.

It costs more than a comparable Ruger 10/22 would, but if you want something that has the styling of the classic PPSh-41 from WWII and is inexpensive to shoot, then take a look at the Puma PPS-50. It’s a good little gun and would make a great plinker that stands out from the crowd. But under no circumstances mess with the drum magazine – that seems to be a consistent hassle for just about everyone who tries.