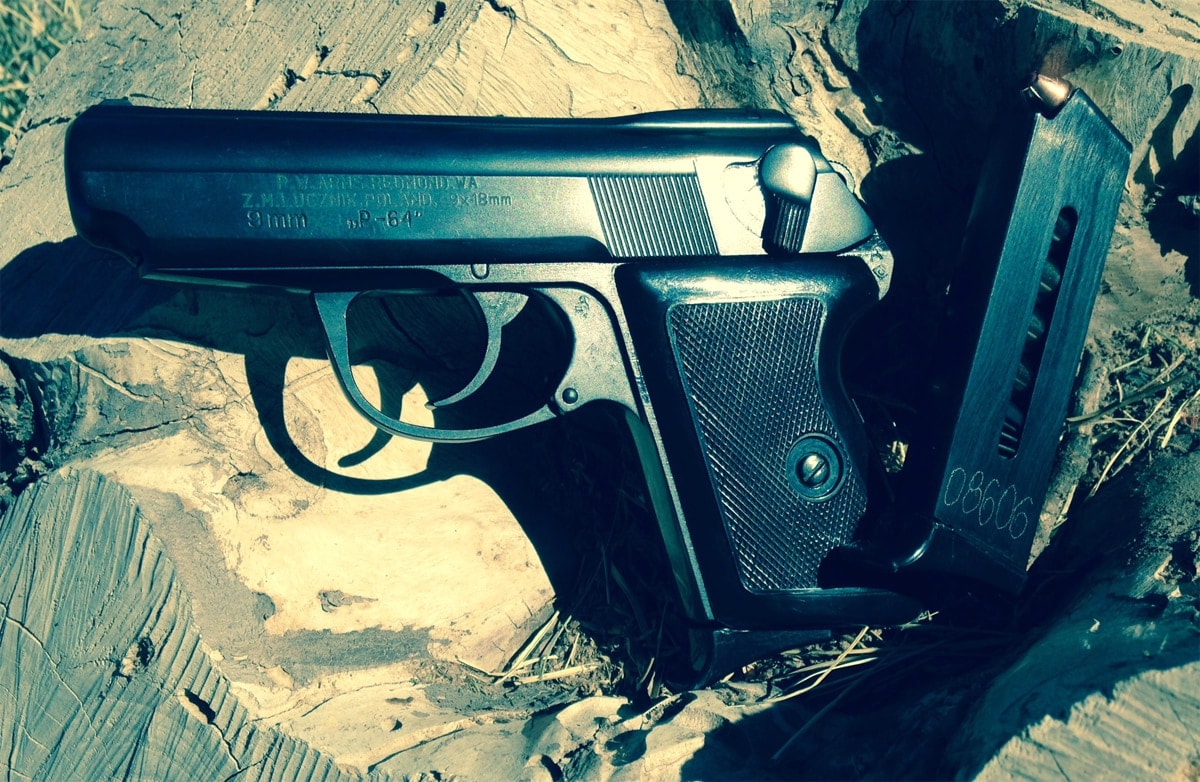 The Polish Wanad P-64 is a semi-auto pistol chambered in 9x18mm Makarov. It has a 3.3-inch barrel, 6.3-inch overall length and weighs 22 ounces. (Photo: Eve Flanigan)

There was that guy in the neighborhood, the one who drove an aging Mercedes sedan. Most had worn out three or four cars in the years since that Mercedes was new, but the familiar chug of the diesel engine reminded everyone that it was not only still going strong, but also that the owner was willing to deal with a few idiosyncrasies.

That same guy is the one who might also choose the Wanad P-64 as a carry gun, and probably inspire his friends to consider the same. In a world full of lightweight, mass-production handguns, there’s something special about the steely heft of this classic Soviet handgun, if one is willing to look — and practice — past a couple of ergonomic inconveniences.

The P-64 was introduced into service as a Polish back-up gun for military and police forces in 1961. It’s chambered in the unique 9x18mm cartridge, designed for use by Eastern Bloc forces by scientist B.V. Semin in 1946, and famously crafted so as to be useless should it fall into enemy hands. Though the frame bears a striking resemblance to the Walther PPK, the Wanad is a patented design.  Though no longer in production, the Wanad P-64 remains in service with some Polish forces. 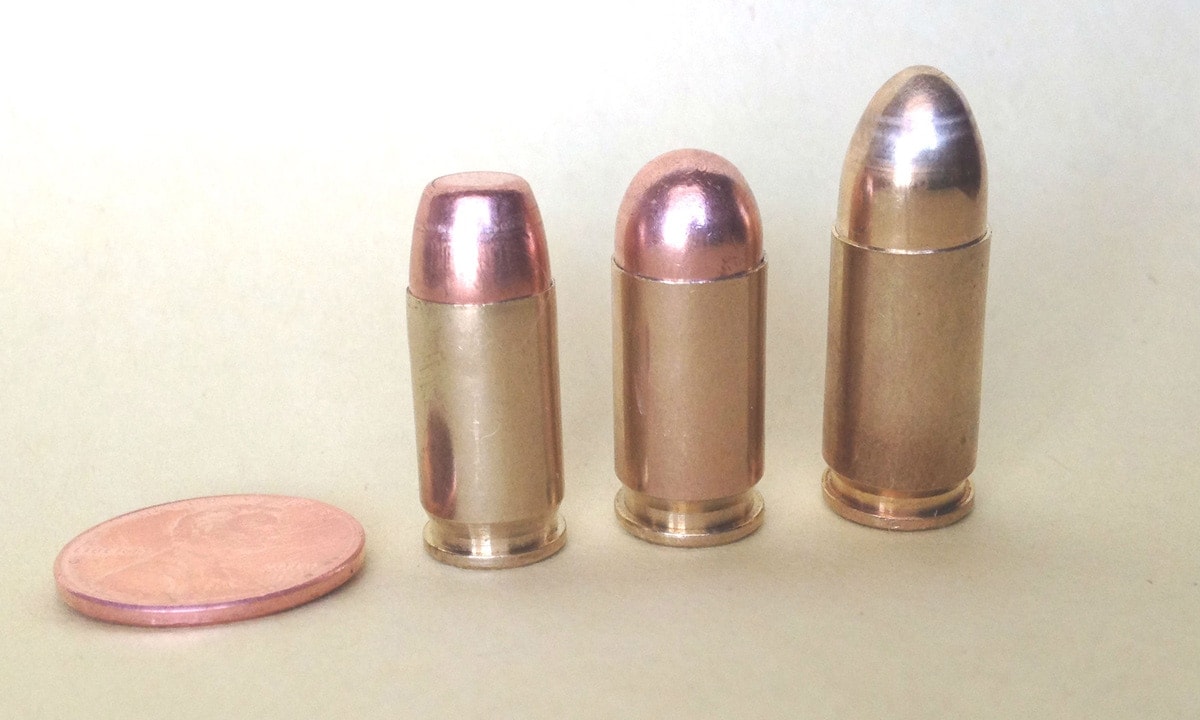 The specific gun used for this article is stamped as a 1970 model by PW Arms of Redmond, Washington, and obtained in 2014 from an online retailer for $260. It makes a tidy concealment package, with a slim profile and rounded edges. The capacity is 6+1, and the magazines have a molded finger rest to enhance the firing grip. The sides and backstrap of the grip are lightly checkered, adding some purchase to an otherwise slippery feel. 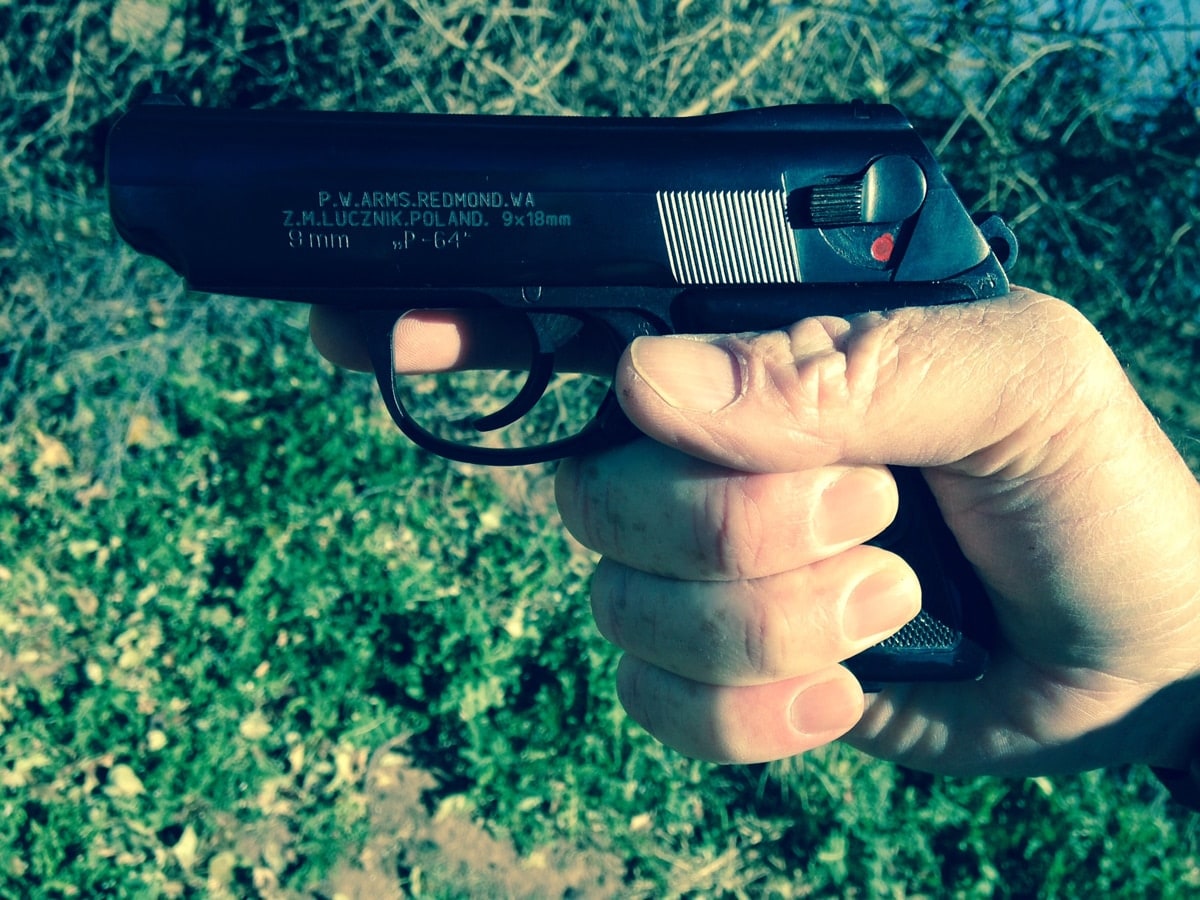 Despite the long DA trigger pull, the gun itself and decocking mechanism are handy and ideal for concealment. (Photo: Eve Flanigan)

Maintenance and repair are made easy by the dual-duty nature of some parts: the trigger guard doubles as takedown lever, and the slide stop is also the ejector. Although the author has not had occasion to explore this handgun from a repair standpoint, parts are reportedly easy to obtain and rarely needed. Takedown and reassembly for cleaning is simple and fast.

The author, with smallish hands, encountered difficulty with this otherwise outstanding firearm when attempting to squeeze off the first shot from double action. The long trigger pull, while functional as a safety feature, proved a barrier to operation. Even with the first joint of the trigger finger hooked around the trigger, the hammer would travel back but not quite far enough to release the firing pin. Actually firing out of double action required assistance from the support hand index finger on top of the trigger finger, for extra pressure. Thumb-cocking the hammer, and thus firing the first shot from single action, proved most efficient.

Once in single action, the little gun proves extremely accurate, despite the short 3.8-inch barrel. The rear sight gap is extremely narrow, about 3mm, which can only aid accuracy, but is not quick on visual acquisition. It’s adjustable for windage and set in a molded groove in the slide. The low profile front and rear sights enhance ease of use as a concealment gun. The magazine release is at the base of the grip.

As with any double/single action firearm, the long initial trigger pull only functions as a safety mechanism when the shooter de-cocks the hammer when finished shooting. The right-side-only de-cocker functions easily and is suited for any size thumb.

For the price point of less than $300, the Wanad P-64 has few peers for quality of construction and value. Like an old Mercedes diesel, not everyone on the block will want one, but the shooter who is fond of it will use it for years to come.