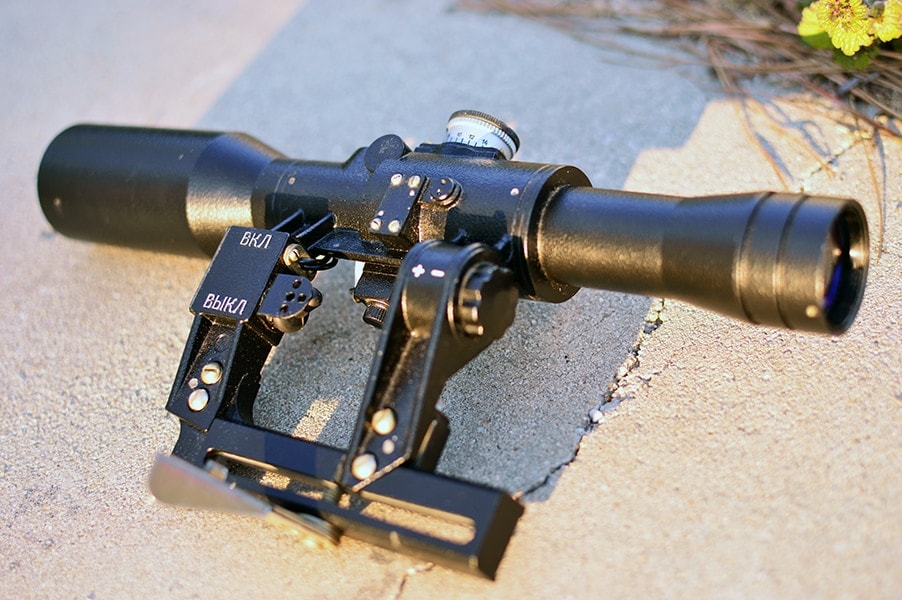 The Belarusian POSP rifle scope is based on the Russian PSO-1 sniper/designated marksman telescopic scope of the late 1960s. At the time of the PSO’s introduction it was the most advanced mass-produced rifle optic in the world. Unfortunately the technology has not aged well.

The POSP’s magnification is fixed and features a bullet drop calculator range-finding reticle consisting of three chevrons indicating where to aim at 100, 200 and 300 yards respectively. Anyone familiar with a Trijicon ACOG understands the usefulness of this feature, especially when engaging targets at known distances.

The POSP and PSO both feature one of the first quick-detach mounting systems that attach to the strange looking side plate featured on most stamped AK rifles and SVD sniper rifles. The two mounting systems are different in that they are not interchangeable, however, both utilize the same concept of a lever-actuated clamp to secure a mounting platform to the side of the receiver.

Additionally, the POSP has a battery-illuminated reticle that makes the cross-hairs more easily visible in low-light conditions. The included bulb is red but can be changed out for a blue or green one. There is no brightness adjustment and the illumination feature is enabled with a toggle switch that has a raised metal guard to protect it from being accidentally turned on.

The POSP has a quick detach lever, a BDC and illuminated reticle. It’s perfect! — except for a few shortcomings that really show its age.

First we have the glass quality of the scope, it’s on par with a $50 optic for a pellet-gun. Due to the less-advanced glass-grinding methods utilized on Soviet-era scopes, the rim of the lens has a spherical aberration that causes a fisheye or parallax effect.

The second issue is the fact that the crosshair is not clear by default and the focal adjustment is very difficult to utilize, because it requires a screwdriver and loctite.

The third issue is one that pops up on all side-mounted AK scopes and that’s height above bore. Meaning, there is only one very specific distance at which the scope is zeroed. Indeed, this is the case with all scopes, but the POSP is mounted so high above the rifle’s bore that the zone the rifle is perfectly zeroed for is incredibly smaller. An additional downside of the mounting height is the difficulty of achieving a cheek weld while aiming. For most shooters, the best they can manage is an awkward chin-weld. 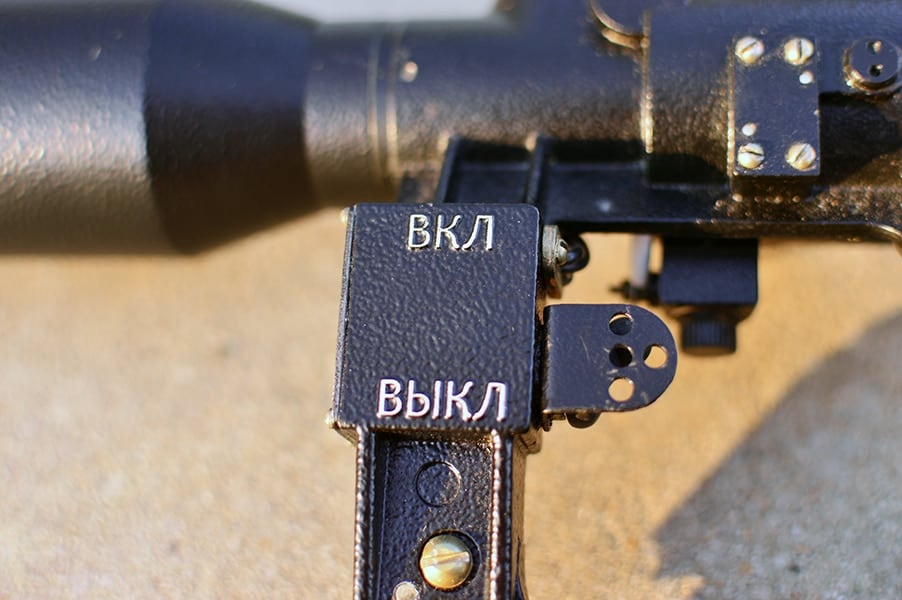 The last issue, weight, is a wash in my eyes. The Zinc-alloy construction that makes the POSP so heavy, also makes it indestructible.

The POSP’s flaws don’t lie with its features, rather the age of the technology used to create them. If modern versions were made out of lightweight metal with high-quality glass and tritium they would be the Russian equivalents of ACOGs, but they would also cost three times as much.

POSP’s are functional for hitting distant targets, though their main selling point is their historic authenticity for shooters who want their rifle to look like it came straight off the Izhavesh assembly line.Performance-minded shooters wishing to squeeze every ounce of performance from their AKs should invest in a scope rail from either Arsenal or Midwest Industries and mount a modern optic.