I was having lunch with some of my students last week and all they wanted to talk about was the coming apocalypse.  Not the book of Revelations, exactly – and not exclusively zombies.  They were more interested in the all-too-pervasive feeling that *the shit*, as they say, is going to hit the fan.

Fecal matter in ventilation systems, sure, but what does that mean?  Zombies, they know, are just a metaphor.  We have no idea what’s coming.  The Zombie is just a mirror of sorts – we make the boogey man look us because we know – even if we won’t admit it – that we are part of the problem.

As the Boy Scouts’ motto says: Always be prepared

I was a Boy Scout.  I am an Eagle Scout.  I consider myself to be reasonably prepared, but I was amused by the lunchtime chatter, so, when they started talking about guns, I asked the impossible question: “How do you arm yourself for some coming conflict you can’t yet define?”

The sons of Virginia’s aristocracy – clad in their seersucker and bowties – decided bigger was better. Wrong.

Now this answer may not apply for some high-rise dwelling Prius drivers who will have to wade through a sea of pissed off people if and when our delicate social fabric unravels, but I’ll cover urban preparedness in another article.

My students are already in the woods.  And I don’t care what you throw at them – zombies, sinners, bankers – these young men will need to eat.  And nothing beats a .22 rifle for hunting and gathering.

To be clear, I want to stress the importance of the .22 LR ammunition in this equation.  I’m not considering other rimfire calibers or chambering.  Imagine a situation in which supply lines break down.  I’m banking on the fact that I can find .22 LR.  And decent people in similar situations might be more likely to share .22 LR than any other type of ammunition.  And as every good prepper knows, .22 LR is cheap and easy to stockpile.

Most .22 rifles guns have a lot of things in common.  They are small and relatively light.  They’re inexpensive and easy to come by.  The ones that make my list are all built of polymer, steel and alloys. 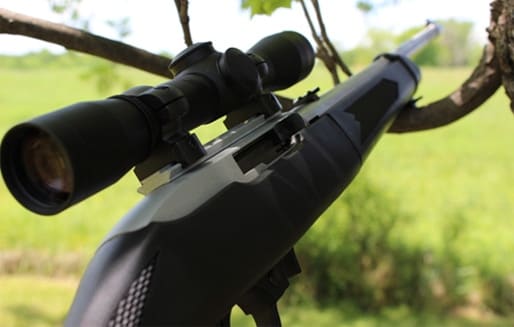 First up is a brand new offering from Strum Ruger.  The 10/22 is one of the most widely respected .22 rifles.  They come in a variety of flavors – most of which are good cornerstone for basic preparedness.  But they’ve topped themselves and released an effective takedown.

The Ruger 10/22 Takedown is a semi-auto rifle. Though the 10/22 comes in a variety of offerings, but the Takedown is unique in that the barrel and receiver come apart with just a few simple moves – no tools necessary – for easy storage and transport.

The Takedown features stainless steel material with a matte finish, an indestructible black synthetic stock, an adjustable rear sight, fixed front sight and its magazine holds 10 rounds. With a 18.5-inch barrel the overall length is 37 inches and it weighs less than five pounds. MSRP is $389.

I just picked up one for review (soon to be published), and I’m impressed.  It feels like a 10/22 should feel: perfect for taking down small game – or small zombies. 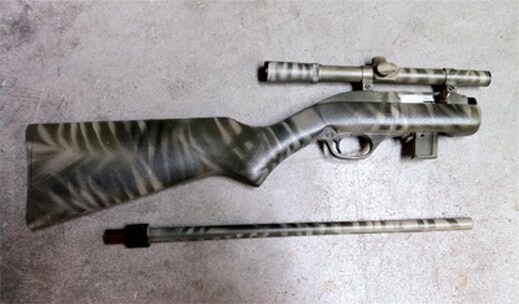 Ruger’s idea for a takedown isn’t new.  Marlin has been making one for years.  As such, the Papoose is relatively easy to come by.  The Papoose’s barrel screws on.  The gun is more compact than the Ruger and less expensive.

The Marlin Papoose has a stainless steel construction with a black Monte Carlo fiberglass stock. It has a 16.5-inch barrel with an overall length of 35.25 inches and it weighs 3.25 pounds. Other than breaking down easily and having a seven-round nickel-plated magazine, it’s a no-frills rifle. MSRP is $298.

The advantage of the Papoose is found in its compact size.  In order to be prepared, you have to have the gun accessible.  Think about bush pilots in Alaska, or those stories of wayward travelers who get caught in unexpected storms in the Sierras.  The Papoose is so compact that is no reasonable excuse not to throw it in the pack, or in the dry-bag in your canoe.

And while I’m on the compact theme, I’d like to highlight the only gun in this list built solely for survival.  I recently had the distinct privilege of reviewing the Henry US Survival Rifle.  The AR7.  This is the ultimate takedown.  The AR7 has the advantage of storing all of its parts in its stock.  It is such a unique and well engineered package.  And Henry’s version is built with the same care as the rest of their rifles.

The AR7 has a steel construction with a Teflon finish and the stock is made of ABS plastic. It uses a 16.5-inch barrel putting its overall length at a cool 35 inches and weight at 3.5 pounds. Besides portability, features also include adjustable sights and an eight-round magazine. MSRP is $275.

The AR7 takes a little while to get used to.  It feels strange at first.  But after half an hour or so, I hardly noticed the AR7’s strange dimensions.  And the ghost ring sight on the Henry is a nice touch.  This is a serious tool.  A logical choice.

I’ve been hearing more and more about Savage lately.  Not that they’re new to the game.  Savage has been making guns, off and on, for more than a century.  And they’re back with inexpensive rifles that are competing with much more expensive guns.

The Savage Model 64 is a basic, no nonsense semi-auto.  The base models are selling for less than $150.  At that price, and with Savage’s reputation for durability, the Savage 64 is hard to beat.  And it is hard to beat up.

Like the 10/22, there are many different kinds of this rifle. The Savage 64 is available with a synthetic or wooden stock, your choice of stainless steel or blued steel material, but the one most appropriate for this discussion is the Savage 64TRR because it has more of a tactical/utility design. It has a short 16.5-inch barrel, an overall length 36.5 inches and weighs the most at 6.6 pounds. The TRR has a threaded barrel, short Picatinny rail up top and a 10-round magazine. MSRP is $315, but if you want one minus the tactical features your looking at $160.

It is not a takedown.  But no big deal.  Toss it in the truck. It won’t complain.

And then there’s the Remington.  The 597 is a good looking gun.  I don’t often say that about a gun without a wooden stock—but we’re talking about weapons built for worst case scenarios.

The 597 comes in a number of varieties.  All are built on the basic 597 action.  Like the various incarnations of the Ruger 10/22, the 597’s differences have more to do with cosmetics and the weight of the barrel.

The newest addition is Remington 597HB, which has steel materials with a Teflon/nickel finish. Though the plastic stock feels less durable than its competition, it’ll work. It features 16-inch heavy contoured barrel, a short rail up top and a 10-round magazine. The overall length is 36.5 inches and it weighs 5.75 pounds. MSRP is $249.

And it is a Remington.  If the ancient Mayans were wrong, and we’re not destined for anarchy and upheaval, than you’ll have a really nice Remington .22.

My students didn’t like my .22 LR answer.  That’s fine with me.  But I know one thing – when whatever goes down goes down – if it ever does – it won’t be like playing Nazi Zombies.  There will be countless considerations.  Food.  Water.   Shelter.  Safety.  Sanitation.  There is no one-gun solution.  But there is a foundation to any well-intentioned preparations, and the .22 rifle is a great place to start.