Most of the gun gear I see is targeted at adults.  While some of it seems ridiculously childish, it isn’t meant for kids.  But little pitchers have easily damaged ears.  Protecting them has often meant finding a product meant for adults and making it suffice.

Pro Ears makes the ReVos for kids.  The small cups are on smaller, though still adjustable, frames.  The wide variety of colors and patterns are appealing to kids.  And the ReVos are built with the same care and materials that the bigger earmuffs are.  They are rated to 26 on the noise reduction scale, cost $39.99 and come with a one-year warranty. And they’re not just for shooters.

My son Thomas is notoriously noise averse.  He will recoil from a flushing urinal because the sound of the rushing water hurts his ears.  Fireworks are out of the question.  Shooting guns when he’s around?  Yeah right.

And he’s five.  I thought we’d be way past this by now.

Not that I expect him to be shooting—but the noise.  I’m kind of loud.  My voice is loud.  I play loud music.  And I love fireworks.  But I don’t get to see them much these days.  At least not until now.  Last week, our tiny town had its spring festival.  The events end with a campy firework show.  And we were able to go, with no apprehension and no fear, all thanks to the ReVos. 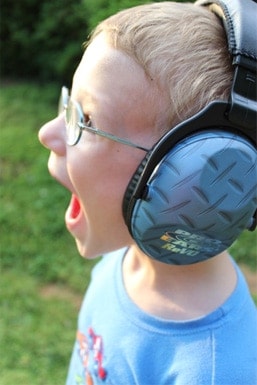 Are they the best available?

I think they are.  I don’t take my five year old out to shoot big bore handguns.  And if he were going to be exposed to that level of noise, I would pair the ReVos with squishy plugs of some sort.

But for shooting .22 LR, or for fireworks, the ReVos are perfect.  Ideal.  The biggest benefit is the ease of use.  Kids can take them off and put them on between shots, which means parents don’t have to keep checking on their earplugs.  And because they are made to fit smaller heads with smaller ears, I don’t worry about gaps—or a loose fit—the way I did with his other headphones.

And I also like that the ReVos are passive.  My son will wear them for a while, and then take them off and twirl them around on his wrist.  Like most everything else he touches, they eventually take flight.  You don’t have to baby Pro Ears active headphones, but throwing them on the ground isn’t advisable.

Pro Ears ReVos are a great idea.  They are a basic piece of safety equipment that will help the little ones in your life develop healthy habits.  And they are just for kids.  My son has adopted his.  They’re his.  And that sense of ownership is special.  He doesn’t have to borrow mine anymore.  He has his own.