The Remington 1100 has been an extremely popular autoloading hunting and trap shotgun since its introduction in 1963. It has been available in many guises over the years including tactical black and camo, but I’m willing to bet that when most folks think of the 1100, they think of good old classic wood on black. The 1100 is well known to be reliable and massively tough shotgun.

The Remington 1100 is a descendent of the Model 58 and 878 shotguns. In fact, the 1100 set a record in 1978 for the most shells shot out of a semi-auto shotgun, without any cleaning whatsoever and without any failures of any kind. That number is a staggering 24,000+ rounds. Although several companies have tried, nobody can best that to this day.

The Remington 1100 is a semi-automatic shotgun. (Photo credit: Cowan Auction)

Of course, Remington 1100s come in many different variations depending on what the operator needs the shotgun to do. Barrel lengths vary from 18 inches all the way up to 30 inches for long-range accuracy. The 1100 weighs in at 8 pounds, which again will vary slightly depending on barrel length.

Breaking the 1100 down for cleaning is super easy, too. Simply unscrew the forearm bolt, slide the forearm off and the barrel detaches. There are a few seals and o-rings in there, which can be a hassle if you don’t remember the order in which they come off the gun. Many 1100s have an actual diagram under the forearm depicting seal and o-ring placement. You can get o-rings from Remington, but they cost a little money and are exactly the same as any #21 Viton o-ring you can get at the local hardware store for a few cents. Viton o-rings resist chemicals and are best for use on your 1100.

The Remington 1100 field stripped and in the box it comes in. (Photo credit: Cowan Auction)

Although the Remington is far from heavy feeling, it’s still heavier than a standard Mossberg 500. Because of that, the felt recoil is far less on the Remington. Also, the gun itself feels extremely solid and nice when compared to my clackity Mossberg. It’s just a joy to handle and shoot. 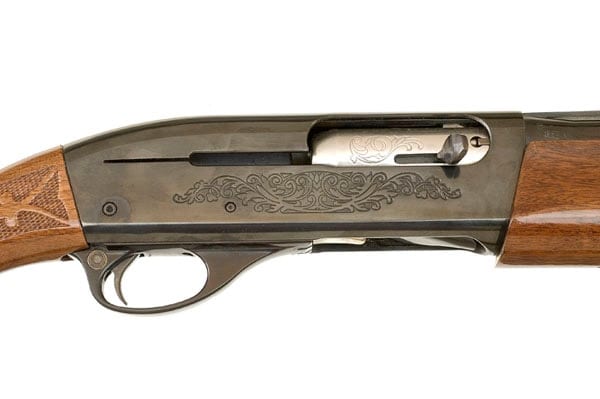 The Remington 1100 has a charging handle on the right side of the receiver. In addition to the controls, there’s elegant scrolling. (Photo credit: Cowan Auction)

The 1100 I have at home is an older model and it’s inscribed on the receiver, which looks elegant as hell in my opinion. As I mentioned earlier, the gun is solid as a brick. Nothing rattles at all no matter how much I shake it.

The trigger pull is smooth and the gun is balanced well. Also, the quality of the wooden furniture is high, adding a great deal to the visual and tactile appeal of the firearm. I have never shot a unit with synthetic components because I far prefer the natural, elegant feel of wood in my hands.

Used Remington 1100s are widely available online, and they seem to average somewhere in the $600 range, although I have seen quite a few good-looking specimens for $400. As an enthusiast living in California, I feel the 1100 is well worth that asking price.

There are a wide range of Remington 1100s available new today, from the Competition Synthetic to the TAC 4, a tactical shotgun with black syntho everything. They all carry an MSRP over a grand, so they aren’t cheap. They are, however, great quality shotguns that won’t let you down. Ever.