To many shooters, the allure of long-range rifle shooting is irresistible. An accurate rifle that can reach out and touch at a thousand yards is an attractive part of any collection. What isn’t so glamorous of long-range shooting is emptying the life savings to afford a rifle capable of it. In the search for a rifle that could shoot well but wouldn’t break the bank, I came across a member of the Remington 700 family, the Mil-Spec 5R stainless steel in .308 Winchester. 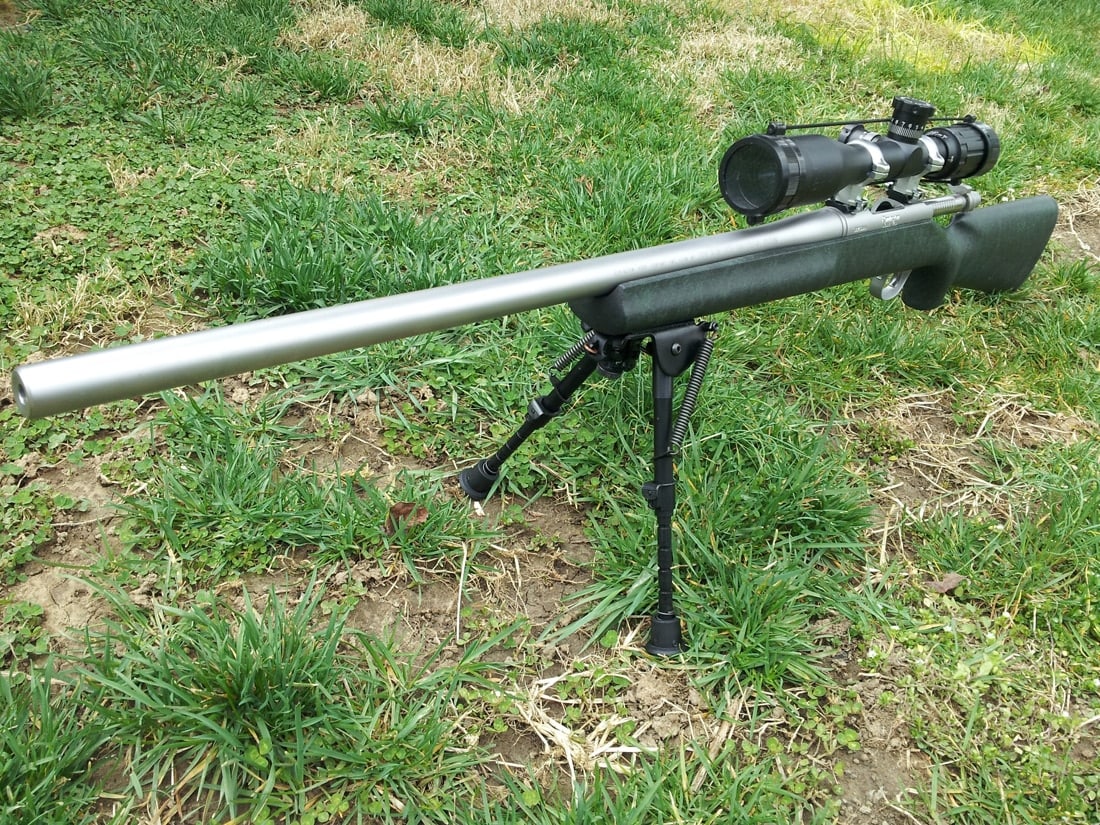 The main feature that sets this rifle apart from other Remington rifles is the 5R rifled barrel. This is the same type of rifling used in the standard-issue M24 sniper rifles, which uses five lands and grooves instead of six. The edges of the lands are tapered down to the grooves, which results in a more complete gas seal around the bullet and the five lands and grooves cause less deformation of the bullet, which leads to better accuracy over conventional rifling.

The heavy-profile barrel is 24 inches long and made of stainless steel. Coupled with the 5R rifling is a faster 1 in 11.25-inch twist, allowing heavier bullets to be stabilized reliably.

The stock is made by H-S Precision, and is oversized in the forearm and the grip areas, giving the user a better grip purchase on the rifle.  Inside the stock is a standard 5-round integral magazine with a swing-open floor plate. The action features full-length aluminum bedding, increasing shot-to-shot consistency.  Remington’s new adjustable X-Mark Pro trigger is featured on the rifle, coming preset at 3.5 pounds with a clean break with absolutely no creep or takeup, and virtually no overtravel.  A screw in the trigger allows the user to adjust the weight within a 2-pound range. 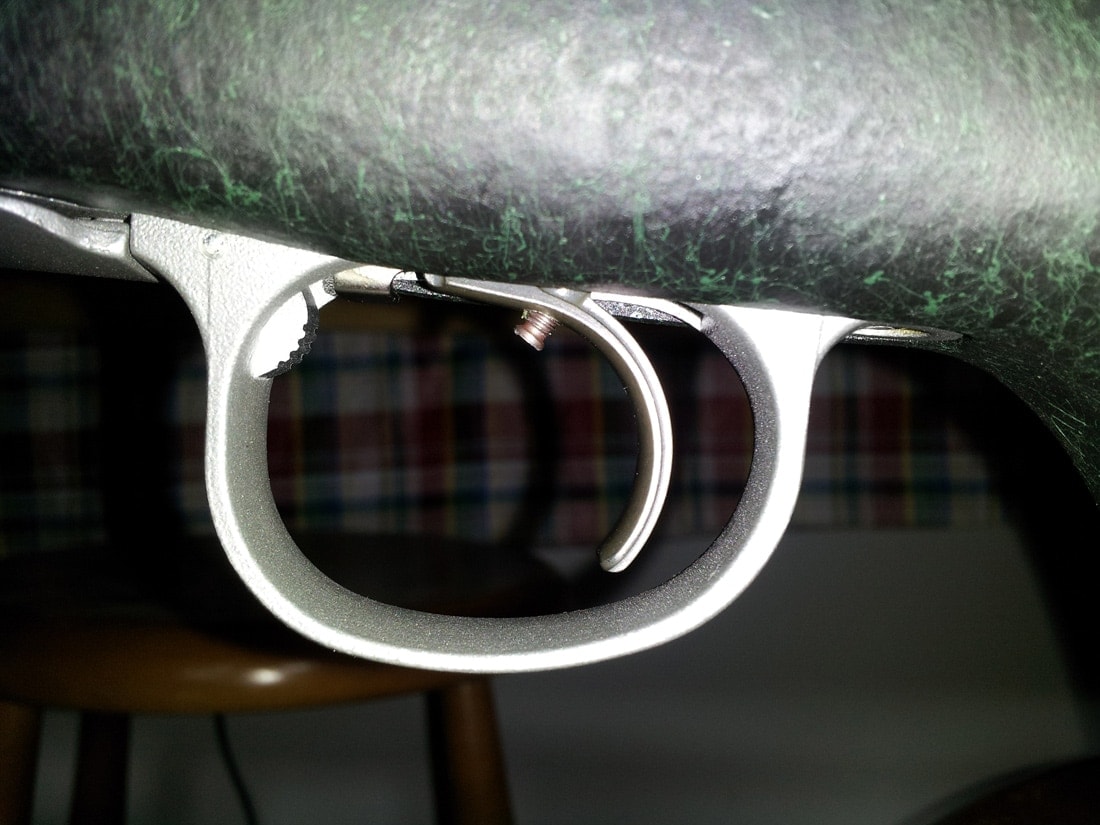 The Remington 700 Mil-Spec 5R trigger. The adjustable screw is in the top center.

The rifle is both a looker and a feeler.  While I have never been one for stainless steel on what is supposed to be a tactical rifle (my intentions were to have the rifle Cerakoted), the combination of black with green-webbed stock and stainless steel action and barrel complements each other well.  It also sits well in the users arms from sitting or prone positions.  However, the 5R is a little on the heavy side at 8.25 pounds, making it fairly impractical for accurate shooting from anything but a supported position.  Even though it is a tad heavy, the rifle is rock solid in every way.

A controversial point of the 5R is the use of the X-Mark Pro trigger system.  I generally like the trigger on the rifle.  It is as advertised: a very crisp, adjustable trigger.  My only problem with it is the adjustment system on the trigger.  On the upper portion of the trigger, protruding diagonally out of the action, the adjustment screw is situated in the perfect position to dig into your trigger finger if it is anything but flush, especially if you have larger fingers like me.  After several weeks and multiple range trips trying to find a compromise between trigger weight and finger comfort, I hesitantly removed the screw entirely.  Surprisingly, the rifle still functions fine.  There have been no slam fire issues, the trigger is not too sensitive, and the safety still functions correctly.

What it does best

My first experiences with the Remington 700 5R were disappointing, however, this was no fault of the rifle.  After spending $1,100 on the rifle, my wallet was hurting and I tried to get away with an inexpensive scope, a Barska SWAT 10-40×50.  It doomed all of my tests with the Remington to absolutely certain failure.  The scope absolutely would NOT hold a zero.  Despite using sandbags, a bipod, and even a rifle rest (Caldwell Lead Sled), I couldn’t achieve groups at 100 yards any better than 1-2 inches, which was NOT typical of this rifle, based on all of the experiences I had read.

While part of me had hoped that I could get away with using a cost-saving scope, I knew that I was being unrealistic.  After a good customer service experience at a sporting good store, I spent a hundred more on a SWFA SuperSniper 20×42 scope, which I had read to be very good quality inexpensive scope.  The new investment remedied any accuracy problems that I encountered with the old scope.  Despite the fact that I shy away from fixed-power scopes because I am always afraid it will limit the rifle’s usefulness at different ranges, I am happy with the SWFA SS 20x.  Its optics are clear and bright, has a very nice mil-dot reticle, and good eye relief.

The 5R surely is a pleasure to shoot.  Because of its slightly more massive bulk from the heavy barrel and beefier stock, the already moderately tame .308 cartridge becomes even milder. The stock comes with a nice rubber butt pad also helping to reduce felt recoil.  Achieving a good cheek weld isn’t difficult or uncomfortable, but a rubber cheek riser would really allow the user to be completely at rest when looking through a scope. 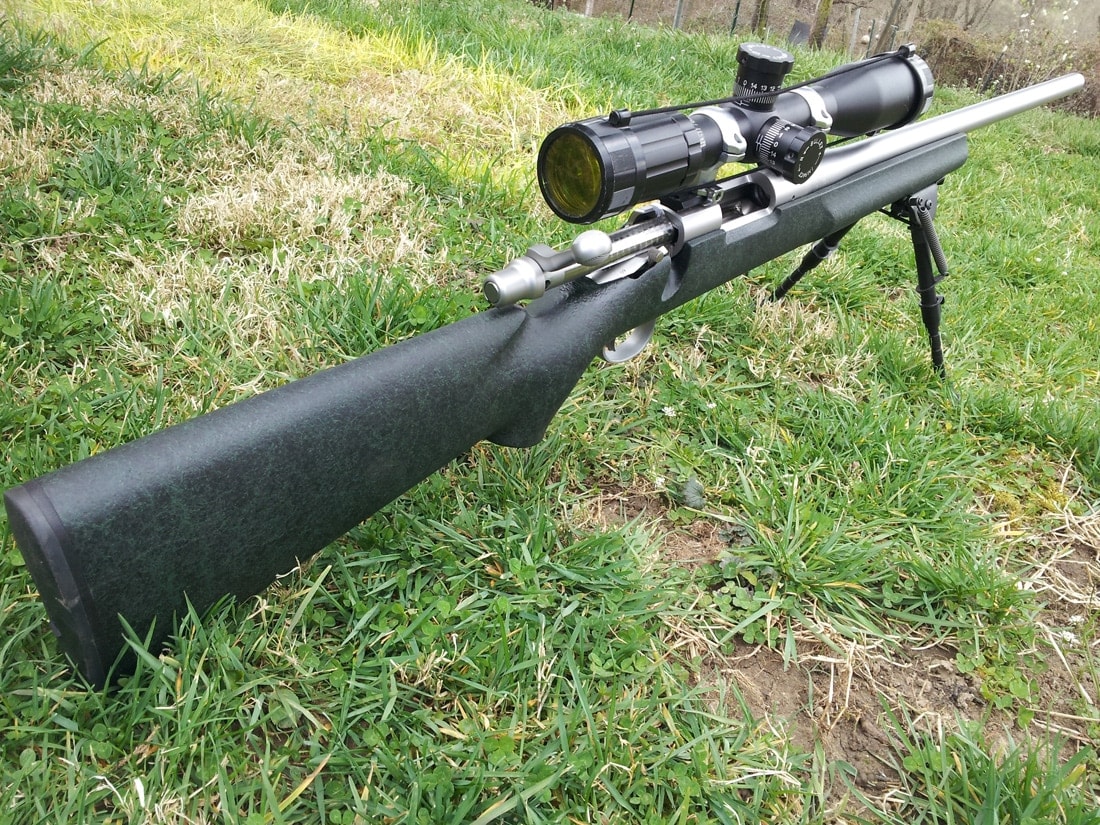 Food for thought (and your rifle)

While it seems to shoot all cartridges fairly well, the 5R does have a tendency to prefer heavier bullets.  A steady diet of Sierra MatchKing 175 grain hollow-point boat-tail keeps my 5R healthy.  Most cartridges that I shoot are hand-loads, but I have tried a few factory loads.  So far, I have put the following through my Remington: Surplus M2 Ball, Nosler Custom Competition 168 grain HPBT, and dozens of batches of handloads.

The 5R likes handloads the best, and so far I have come up with the following recipe:

These loads will regularly achieve .25 MOA, at ranges between 100-400 yards through my 5R achieving 0.2-inch groups at 100 yards and 1-inch groups at 400, but your mileage may vary.  I have read experimentations with Berger VLD 175 bullets that deliver a similar performance, but for the price, the Sierra bullets give you more bang for your buck.

The Nosler 168 grain is the next best cartridge for this rifle.  I have only shot this load at 100 yards, but achieved on average 1/2-inch groups.  However, I noticed that these cartridges were not seated very uniformly, possibly leading to different chamber pressures and muzzle velocities due to bullet jump in the chamber.

The M2 ammo by far performs the worst.  Groups at 100 yards seem to be neither consistent nor precise.  The worst groups were over 1 inch, while the best were approximately half an inch.  Once the ammunition and reloading supply shortage ceases, I intend to perform some more tests including the Palma 155 grain bullets and Berger VLD’s of various weights.

The Remington Milspec 5R is a lot of gun for your money.  It easily performs as well as if not better than rifles that are three times its cost, especially with a little bit of time invested in experimenting with handloads.  The combination of a milspec barrel with unique, accurate rifling, a comfortably molded, solid, well-bedded stock, and traditional, versatile cartridge such as .308 makes a rifle that shoots and feels great.  The 5R is capable of finding a welcome home in the hearts and gun safes of new and experienced shooters alike.