Before buying my first gun, I did a lot of research to narrow down what exactly I wanted. The most interesting to me was a bolt-action rifle. At first I was thinking of a classic one made of steel and wood — just something that many people consider a proper rifle — but then I considered my budget.

As a first time buyer I considered all the various decisions that go into buying a gun and decided on the Remington 770 chambered in 7mm Magnum.

The Model 770 is an upgraded version of the economical Remington 710, which descended from the, no introduction needed, Remington 700. What makes the 770 fall into the “economical” category is, well, like any package deal the 770 is a compromise — you give a little, you get little. It has a synthetic stock instead of a wooden one, but it comes with a pre-mounted scope, and price is set at $373.

While it may not be the first pick for many experienced or professional hunters, for an enthusiast with a limited amount of money to dedicate toward a hobby, this rifle may very well be ideal.

If you’re like me, I wanted a hunting rifle. Something capable of taking on any game that can legally be hunted in the country. After discussing it with friends and other enthusiasts I chose this rifle and caliber.

The 7mm Magnum is a powerful round that can take out anything in North America. Many of the gun rags that discuss moose hunting feature this cartridge. It’s considered to be one of the most powerful rounds used in the modern hunting community. A lot of old school hunters still use the old .375 H&H, the precursor to the 7mm Magnum.

Although your shoulder might quit after shooting two boxes of 7mm Magnum rounds, the Remington 770 rifle is a blast to shoot and the fun will surely outweigh the pain.

There is, however, a cheap, easy and effective fix to the shoulder pain. Just add a simple slip-on pad that helps reduce felt-recoil. The one I use is a Pachmayr Decelerator Slip-On Recoil Pad. With this installed, shoulder pain should not be an issue; a day at the range is limited to the amount of money you are willing to spend on ammo.

Lastly, the rifle is reasonably accurate. In the average man’s hands the 770 will put out palm-size groups at 200 yards.

When I first held the Remington 770 in my hands I was truly amazed. I have shot other rifles before this one, but this one was special because it was my rifle! However, shortly after taking it to the range and gaining more knowledge about firearms I started to realize where it could be improved.

In the hands, the 770 feels like a nice solid piece of equipment, but upon closer inspection you’ll notice where it’s lacking. The main issue is that the bolt’s action is choppy compared to Remington’s most cherished design the Model 700.

The sticky bolt issue seems to be caused by the bluing and rough design of the bolt, but is easily resolved simply by polishing it. It doesn’t need a full makeover for improvement, the rough patches just need to be smoothed out 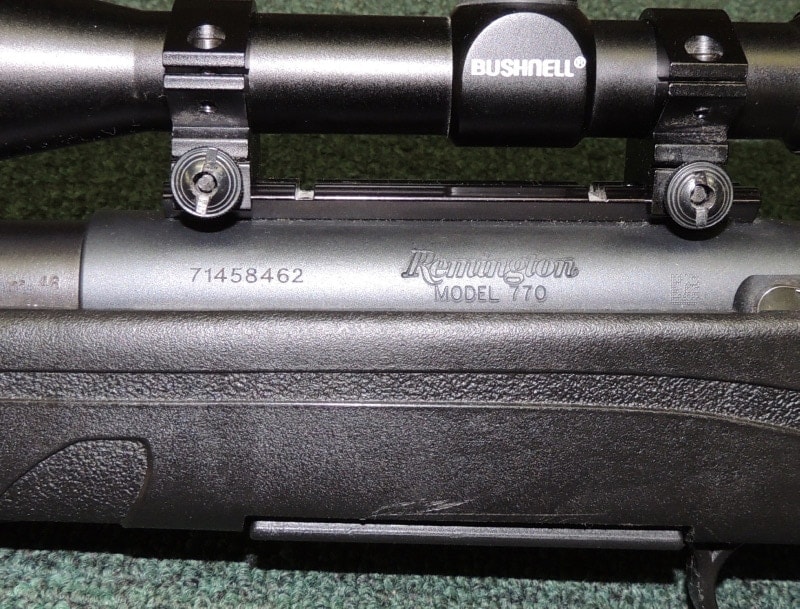 Also, the scope that comes with the rifle is actually a good scope — a Bushnell 3-9×40 — but not suited for this rifle.

The way it comes mounted to the rifle, out of the box, permits minimal eye relief, so you have to hold your eye really close to the scope in order to see the target in clear view. So depending on the chambering and/or your size, getting too close to the scope could result in a nice blow to the head (one that leaves a mark and swells around the eyebrow).

And let’s be honest here, a 7mm Magnum or bigger is not something a beginner would want to take to the range and shoot all day (in fact, I bought a 7mm Magnum because of my inexperience at the time). Fortunately the Remington 770 is available in seven different hunting calibers, some of which are softer on the shoulder and easier on the wallet. The rifle is also available with a black or Realtree camo synthetic stock, comes with either a stainless steel or blued finish barrel, and has a magazine capacity of three to four rounds depending on caliber.

Remington 770 certainly does the job and fires like it should. For most people who live busy lives, and turn to shooting or hunting for recreation, it is definitely a winner. Knowing that you didn’t break the bank buying a gun makes a day at the range that much more enjoyable.