Alexander Arms AR15 .50 Beowulf Review: “A Rifle Capable of Breaking Both Shoulders of a Moose”

If you have no prior knowledge of this weapon then let me put it this way. If you’re a fan of the AR platform, but want something more powerful than .223 – something that’s “capable of breaking both shoulders of a moose” – you might want to consider the .50 Beowulf from Alexander Arms.

Now, I’m not a huge fan of ARs. I’m just not that much into them— No, I don’t think that they’re imbued with the spirit of Evil or anything. They’re a proven platform that a lot of people love for good reason. I just haven’t shot any that really tripped my trigger – until I tried this one that is.

It belongs to a friend of mine. He’d been trying to get me to go out to the range with him to give it a try. And since I’m not into ARs I kept putting him off, but, now, I wish I hadn’t. 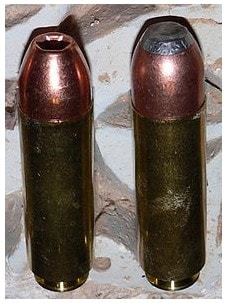 Alexander Arms is a widely respected company, producing good guns and doing interesting and innovative engineering. They’re the ones behind the popular 6.5mm Grendel and just recently came out with a limited edition AR in .17 HMR. And they introduced the .50 Beowulf about a decade ago.

The AR15 in .50 Beowulf is a standard Mil-Spec AR (albeit a very well made one) in every regard but the upper. Part of the design of the cartridge was to maximize the power while staying within the constraints of the standard AR system.

You can actually use standard .223 magazines with just a minor bit of work to the feed lips (and the company recommends changing the follower, though my friend has found this isn’t necessary for dependable operation).

The model tested is called the “Overmatch Plus – Complete Rifle” model with the ‘pepper pot’ brake. This model includes most of the bells and whistles available and runs about $1500 currently.

It is very well made, with excellent fit and finish in every regard.

During testing, well, that’s where I gave it its nickname – it’s definitely a ‘thumper’. The recoil felt like shooting a 20-gauge shotgun (meaning the recoil wasn’t as bad as shooting a 12 gauge) with rifled slugs.

We shot it using the iron sights it came with and used 230-, 275-, and 300-grain bullets from different ammo manufacturers. All performed well, and accuracy was as good as I am out to 100 yards with the iron sights, but others have reported good performance with the Beowulf out to 200 yards or further with the right optics.

And that is why people like this gun, in this configuration, with this cartridge: you can basically get the kind of power and accuracy you get with a shotgun shooting slugs at say 10 yards, but all the way out to at least 100 yards. It hits hard, and accurately – meaning effective stopping power on target through heavy brush or barriers.

From the Alexander Arms company FAQ page, where I got the above bit about shooting a moose: “The .50 Beowulf is particularly well suited to close cover hunting where shots are not likely to exceed 200 yards, but it is imperative to anchor the game quickly.”

Of course, this kind of power isn’t for everyone. Personally, I don’t have a need for it, but others might. And this is a very well made and controllable firearm for an experienced shooter.

At the very least – if someone offers you the chance to try out their AR15 in .50 Beowulf, don’t hesitate. Take‘em up on it.