Review: Hunting? Defense? What exactly is the Ruger Gunsite? (VIDEO)

A public service announcement on the radio last night said that I should put up three days worth of nonperishable food, you know, just in case. They weren’t clear about the coming threat. There are a lot of options: natural disasters, epidemic disease, religious salvation, or a possible Zombie Apocalypse.

The PSA ends with a man talking about eating his dog’s food.

Not me. I’m prepared, as the Boy Scouts say.

I’m going to ride out the hurricane. I’ve decided to survive the diseases (optimistic, huh?). And I know I’ll be left behind. At least for a while.

But in that grim dystopian future when the Army has depleted its resources and conscripted what’s left of the Boy Scouts… when all that’s left of the UN are blue helmets rising from the dirt like oversized mushrooms… when I have eaten my three days worth of non perishable food, all of the dog’s food, and the dog… Then what?

Me? I’m heading for the hills. And, unless something better comes along, I plan on taking a Ruger Gunsite Scout Rifle with me.

This is one fascinating gun. It looks like hunting rifle that is going through a rebellious phase. It is a Model 77 that has some serious tactical features more common on pugnacious guns: a forward mounted Picatinny rail, a 10 round box magazine, a clipped barrel and a muzzle break.

But it is still an old Ruger Model 77 at heart. The bolt action, trigger, and stock will be familiar to most everyone who has handled many long guns.

So why all the fuss?

The gun was developed with guidance from the Gunsite Academy, in Paulden, Arizona – an institution in firearms training. The good folks at Ruger and Gunsite put their minds together and designed a gun to do it all.

Though Ruger markets the Gunsite Scout Rifle as an innovation, I see it as more of a throwback; it is a bolt action M-14. It isn’t selective fire, or even semiautomatic. But that is part of what makes it half the price of a good M14 copy, like the one offered by Springfield.

The M14 marked a transition between the rifles of the Second World War and the M16. The M14 was supposed to do anything anyone asked of it. While it was shorter than most rifles, it was longer than most carbines – and it was chambered in .308. Though there are still many M14s in special service, most were quickly replaced by the M16. But the desire to have one gun that will do it all lived on.

The Gunsite Scout Rifle is a multi-tool of sorts. That’s how a friend of mine described the Ruger 77/357, but I think it is more apt for describing the Gunsite Scout Rifle. It is a reasonable gun for hunting at reasonable range. The .308 round is heavy and has some serious stopping power. And the .308 round remains popular with many groups who (there is no other way to say this) shoot other people. Sport. Defense. It is rugged and durable. Ammunition isn’t impossible to come by. And it looks great.

If you ignore the tactical accoutrements, the Gunsite Scout Rifle shoots like many bolt action rifles. And that is a good thing. While I love playing with semi-automatics, I prefer bolt-action rifles. Adrenaline has a way of erasing common sense. When the zombies come, I won’t find myself sticking the barrel over a cinderblock wall, emptying the magazine at God-knows-what. I’ll have to think a little bit. Slow down. Work the bolt. 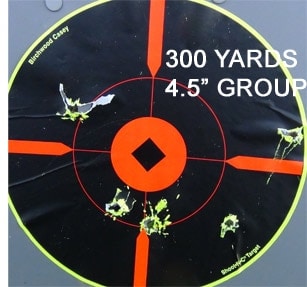 There is nothing in North America that the .308 won’t dispatch. Maybe Andre the Giant. Wait – he was dispatched by congestive heart failure. I’d say Zombie Andre, but I think he was cremated. I digress.

The .308 Winchester ammo isn’t cheap, but it’s reliable. It will handle any North American game. And when the zombie hordes are scouring the countryside looking for brains, odds are there will be some surplus 7.62×51 NATO lying around. It won’t be as easy to find as ammo in Call of Duty, but it won’t be impossible. For a while.

In the meantime, though – what would I do with a gun like this?

The barrel is short. At just over 16 inches, it isn’t going to set any records for distance or accuracy. Yet, it is dependable out to 300 yards – maybe farther if you strap it down and hold your tongue just right. It is great in that middle range – especially if you are working in that 200 yard window. I rarely have more distance than that to cover in Virginia. 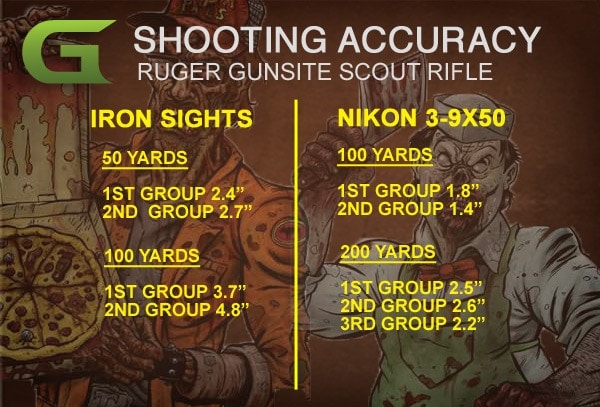 The iron sights are fantastic for close work. The Gunsite has a nice ghost-ring sight and a durable front blade that is well protected by substantial wings. The Picatinny rail and traditional scope mounts give you many options for optics. Again, there are multiple accessory options and possible configurations.

The plywood stock is nice. Engineered woods are really stable. Plus, the stock has a nice grey and black pattern that goes well with the whole tactical-fashion-aesthetic. And it feels really nice. The finish is solid and durable.

The philosophy behind this gun is, obviously, tactical. And very few of us need that. Want, maybe. But need?

And will you ever need just one gun?

You lose the precision of a longer barrel, the rapid rate of fire from a semi-auto. You pick up weight in the .308 rounds. And you are going to have a hard time scraping up what’s left of small game.

But you gain the mobility of a shorter barrel. The solidity and reliability of the Ruger Model 77 bolt action. You can easily change out the optics for a wide range of scenarios. And, for those survivalists out there who are planning for the zombocalypse, the Ruger Gunsite Scout Rifle is perfect for harvesting domestic or feral livestock. Cows. Pigs.

I like this gun. I respect what it does. I respect the sacrifices the gun makes. If I were new to the market, and looking for a rifle that provided me with a lot of options – the Gunsite Scout Rifle would be a logical choice. If I already had a collection of rifles that perform their specific tasks quite well, than the Gunsite would be a fun gun to add to the collection.

Like many weapons, I’m awed by the Gunsite Scout’s potential, its power and I hope I never need most of what it claims it can do.