I think the Stinger Liberator 9mm is the most unpleasant handgun I have ever shot. But I’ll get to that in a minute.

First, a small warning: in doing a little poking around for information about this one-shot derringer before writing this review, I came across a couple of sites which indicated that they had auctioned a pair of the guns. If you do a search for “Two Rare Stinger Manufacturing Liberator 9mm Pistols” you will undoubtedly find the same sites. The sites used the same images, the same description, and claimed that someone had paid $2,750 or $3,000, depending on which site you look at. Since this gun can be found occasionally for a couple hundred bucks, I have serious doubts about the legitimacy of these sites, and suspect that they’re some kind of scam. Caveat emptor.

OK, back to the Stinger Manufacturing Company “Liberator.” 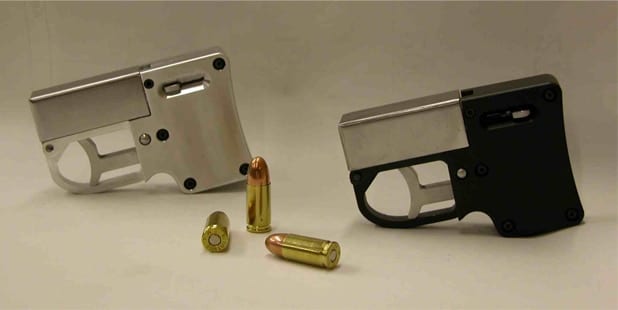 This is a one-shot derringer. It doesn’t really look much like a gun at all. No, not the same way that the Stinger Pen Pistol doesn’t look like a gun. Rather, it looks like just a couple of chunks of material which might be part of something else. Someone else described it as looking like a 10/22 trigger group, and I wouldn’t disagree with that. It also looks like something someone made in their basement with a hacksaw, a file, and a drill. It doesn’t really look like a gun.

And really, it isn’t a gun. At least not in the sense most of us think of a gun these days. There’s a block of metal on the top with a hole drilled in it for a barrel (there’s no rifling, and the whole thing – including what passes for a chamber – is about 1.5-inches long). That block tips up from the rest of the gun with a simple hinge and an even simpler plunger as a lock. There’s a slot cut in what passes for a receiver, and there’s a couple little plastic flanges that stick out and are used to ‘cock’ a simple spring-loaded firing pin. The trigger is rough, but does trip the firing pin and fire the gun. I can’t say how reliable the thing is, because none of us was willing to fire the thing more than once. 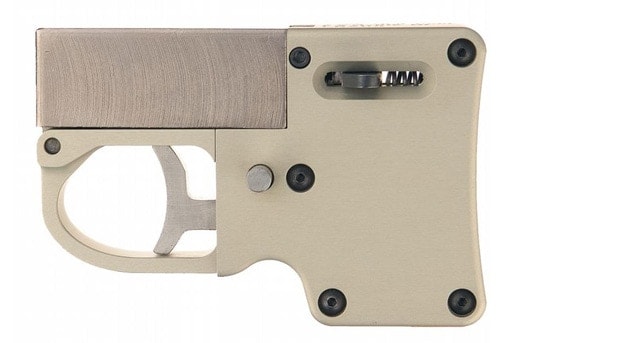 Shooting it once was enough. Since it is small, and all hard edges, and doesn’t weigh very much, it was very unpleasant to fire – VERY unpleasant. And I’ve shot full-house .44 magnums out of a derringer. This was much, much worse. All three of us who tried it thought so. It slams back into the web of your hand at just the wrong angle and leaves your hand stinging like hell. Maybe that’s where the name came from. 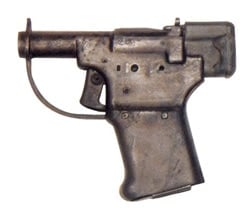 The only good thing I have to say is that at about five yards distance, all three shots fired hit a torso target – in the head. Which is kinda where we each had pointed the thing (there was no ‘aiming’ really – there’s not even rudimentary sights).

But seriously, almost any other firearm would be better. The thing is about the size and weight of a micro .380, so there’s no advantage there. I think it is not as well made as the old Raven/Jennings/Whatever .25s (which is saying something). And it only has one shot. Not even someplace to store additional rounds like the real WWII Liberator had.

Do yourself a favor, and never shoot one of these things, even on a bet. And if you want to buy one just for the novelty?