The Smith & Wesson models 442 and 642 revolvers have their roots back almost 60 years. Needless to say there have been any number of variations on the J-frame theme over time, but perhaps the most popular has been the Airweight 642 (in stainless steel or brushed aluminum, and a variety of grips). The 642 certainly has been a very good seller, and has been at or near the top of S&W’s sales for most of the last decade. The 442 and 642 models are identical in every way except finish (the 442 is blued), but the 642 is more popular.

Why is this gun so popular? Well, it does everything right, at least as far as being a self-defense tool. It’s small, lightweight, hides well in a pocket or purse, intuitively easy to shoot, and it handles the dependably potent .38 Special cartridge.

But let me expand on those points.

The first three are all tied together. For anyone who is looking for a gun to carry concealed, the J-frame size has a lot going for it. The 642’s barrel is one- and 7/8-inches. Overall length is just a bit more than six inches. Though, the cylinder is wider than most semi-autos, the overall organic shape of the gun seems to make it hide better in a pocket or behind clothing. The Airweight 642 weighs just 15 ounces unloaded, and not a lot more loaded. For most people, this is lightweight enough to carry in a pocket or purse without really noticing it. Put it in a belt holster and you’ll not even know it is there. 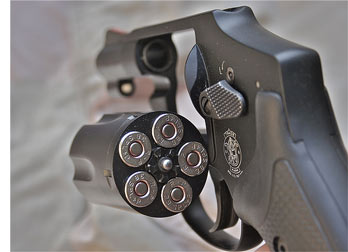 Easy to shoot? Well, yeah, though it takes a lot of work to be really accurate with one. The 642 is Double Action Only (DAO), which means that the hammer is cocked and then fired all with one pull of the trigger – nothing else needs to be done. There’s no safety to fumble with. Just point and click. Almost anyone can be taught to use it with adequate accuracy at self-defense distances (say seven yards) in a single trip to the range.

The modern .38 special +P cartridge is more than adequate for “social work”. From my 642 we tested five different premium defensive loads and four of the five were between 900 and 1000 fps. Other tests have shown that these cartridges both penetrate and expand well, too.

One more thing – the design of the Centennial models, with the internal hammer, means that they are snag-free. You don’t have to worry about some part of the gun catching on clothing or other items when drawing it from concealment. This can save your life.

With all the good being said, I do have two criticisms. The first one is minor, and easily fixed: the trigger. Oh, it’s good, but it could be a little bit smoother right out of the box (like Ruger’s LCR). The good news is that this can usually be worked out with just some dry-firing exercises.

The second is the front site. S&W is still offering the guns with just a simple ramp sight. They should switch over to some variety of tritium sight, as they have done with many of their other J-frame models. This is one change would help in low-light conditions.