Last summer, as part of the big BallisticsByTheInch.com .22 tests, I shot a Whitney Wolverine pistol—it’s something I’ve wanted to do since I was a little kid. 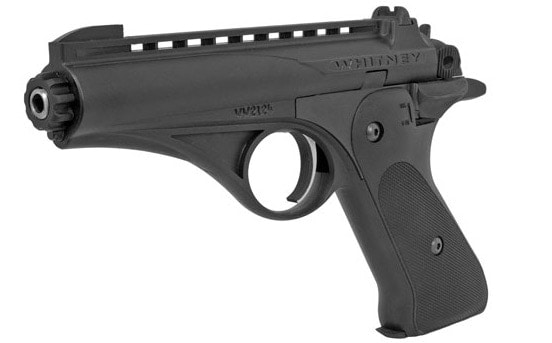 The new Wolverine maintains the design and functionality of the original, though the modern one has a polymer frame and vent rib whereas the original was aluminum. So it still looks like a classic ray-gun of the 1950s. More importantly, it shoots as nicely as the original was supposed to have shot.

That’s because while the styling is very ‘science fiction’ the ergonomics are actually quite excellent. This is one of those guns which points very naturally, has a good balance, and handles recoil without a problem. It is the kind of gun which you want to shoot a lot, and doing so won’t either break the bank or bruise your hand.

In keeping with functionality of the original, the Wolverine has a magazine disconnect (i.e.: you have to have a magazine in place or it won’t fire) and the bolt does not lock back after the last round is fired. This was the expectation of most .22s back in the 50s and 60s, and it comes as no surprise with the Whitney.

The one we used was fairly new, and hadn’t been shot very much. The fit and finish were OK, but nothing to write home about.

The trigger was decent, and would probably get better with use. Overall it was acceptably smooth.

Operation of the gun showed that the recoil spring was a little stiff, and all the parts needed to settle in a bit. Similarly, loading the magazine took a bit more work than it probably will after some use.

All around, in other words, everything needed to seat in and smooth out. This could be corrected with more attention to the fit and finish, but it wasn’t bad for a gun in the $300 price range.

We didn’t have any significant problems with the gun handling all of the different ammunition types we were testing, though there were a couple of rounds which didn’t cycle fully, and one or two which didn’t fire on the first strike. Others have reported mixed results with ammunition pickiness in their Wolverines, saying that they have a preference to feed and fire some brands over others. I’ve come to notice that .22-caliber pistols seem to be prone to this sort of thing, so I didn’t consider it a major flaw in our testing.

The performance of ammo (in terms of velocity) through the Wolverine was what you would expect for a gun with a 4.5-inch barrel. This tells me that the engineering is as good as most guns in its league.

Accuracy is fine, though the sights are pretty basic. There’s a blade in front, dovetail in back. Out to 10 yards it was easy to maintain four-inch groups shooting freehand, and the same with six-inch groups at 25 yards. As noted, the gun is a very natural pointer, and would be perfect to use for introducing new shooters to plinking cans. I would say that it is very comparable to shooting a Ruger semi-automatic, in these terms.

So, yeah, it still looks cool, it shoots pretty well, and it’s not priced outlandishly. This is a good revival of a classic pistol, and one which I wouldn’t mind having in my gun safe.