Sure, a monstrous .44 Magnum Dirty Harry revolver is cool, but there is definitely something to be said about a gun that fits in your pocket—even ones chambered for .22 LR. So, there in lies the Taurus 22PLY. 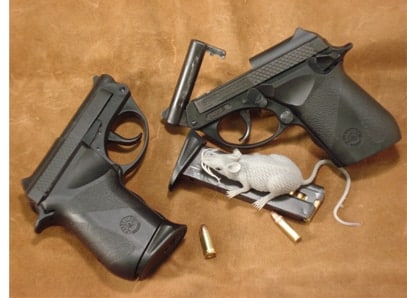 The pocket pistol is coming to be synonymous with “self-defense,” however, when we think of self-defense rounds the .22 LR isn’t always considered. But like any cartridge the .22 can be a very effective caliber if used correctly. The Taurus 22PLY comes chambered in .22 LR, and has an 8+1 capacity—so enough to mess up someone’s day or eliminate an empty coke can.

The 22PLY is basically a next-generation PT-22, a gun that has seen high success from the Taurus camp (and looks oddly similar to the Beretta Tomcat, weird?). So, what’s new? For one, the frame is polymer instead of alloy. Second the trigger guard has been radically redesigned to reduce snagging when it comes out of the pocket. Personally, I like the sleek, aerodynamic look of the little pistol, too.

The 22PLY is blowback operated and has a double-action-only trigger, meaning the gun cannot be cocked for a shorter trigger pull. Speaking of trigger pull, the little 22PLY breaks at almost ten pounds, which is rather hefty but not finger-breaking. It is easy to feel it break, too.

One unique aspect about this little brute is the tip-up barrel; it can actually be released from the frame and rotated upward so that a round can be inserted directly. I would never even have considered such a thing, but it’s actually really cool. It makes for quick loading and a great conversation piece at the range.

Another plus, with the tip-up barrel is that, the 22PLY can be fired as a single-shot pistol (with an empty magazine inserted, of course) making it great for plinking with kids or less experienced shooters.

The gun’s front strap has grooves molded in for your first three fingers, and the end of the magazine has a spot for your pinky. This type of design is finding its way to a lot of the pocket pistols today, and for good reason: it works. The 22PLY will fit in most hands easily and besides, (unless you have fists the size of cantaloupes, but then you probably wouldn’t be in the market for a mini-gun, anyhow). 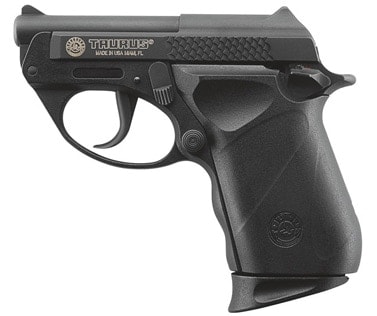 The polymer frame brings this little guy down to a featherweight of just under 11 ounces. The barrel is only 2.33 inches long, so this gun wasn’t intended for accuracy much over ten yards. This is an up-close-and-personal type of firearm that’ll be there when you need it.

It features a thumb safety under the rear left of the slide and although it’s tiny, it’s very easy to engage and disengage. Many shooters don’t use the safety, anyhow, so the size of the mechanism may be a moot point for some purchasers. The pistol cannot fire without the magazine inserted, which is its other safety feature. Again, to some this is meaningless because the average shooter probably doesn’t fire a gun without the magazine in, anyhow.

The slide-grip is a reverse fish-scale type of design that is becoming popular on a lot of semi-autos. I prefer the tried-and-true lined-grooves, but I’m willing to concede here and there. I think that sweaty hands will be able to grasp grooves better than the fish-scale stuff, but the pistol is double-action in the first place so it doesn’t matter one way or the other.

Taurus recommends using only 40-grain loads rated at 1,280 feet per second for this gun. I’m sure it will be tempting to try a harder-hitting round, but I would keep safety in mind if it were my gun, and stick to the 40-grain factory recommendation. Also, like a lot of .22s, it doesn’t like really cheap ammo.

Overall, I really like the 22PLY. It’s a good-looking and sleek pocket pistol with a few tricks that set it apart from the crowd. Also (are you ready for this?), the MSRP on it is only $273, and the actual price is more like $200. My prediction is that these small guns will fly off the shelves in 2012.