The rifle arrived in a hard plastic case with replica period sling and olive drab canvas carrying case, and a reprint of TM 9-270, the 1943 tech manual for the rifle/scope combo. My first impression of the rifle was good, until I noticed the scope mount had been installed crooked. I’ll get to a full description of the rifle in a minute; the real adventure has been with the replica scope.

The case of the crooked scope 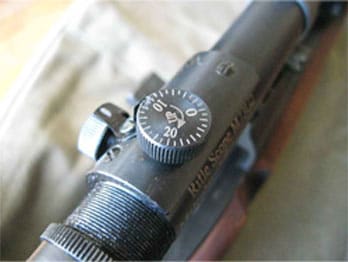 I cradled the rifle on my workbench and attached a collimator at the muzzle to try to zero the wayward scope’s bore alignment. Happily, elevation was spot-on, no shims required. The mount is a replica of the stout, one-piece Redfield Jr. that features lateral adjustment screws at the base of the rear ring. They move the ring right or left to compensate for minor deviations in mount screw hole drilling, thereby mechanically aligning the scope with the bore axis before you ever have to start cranking on the scope’s windage knob. The anxiety here was that the mount is installed way off-center; the mounting deviation isn’t a minor few thousandths of an inch, it’s a full .060 inches off to the left. I wondered if the adjustment screws had enough length to compensate for the driller’s error. They did, but just barely. Tweaking a windage zero with the mount’s lateral adjustment screws meant the right hand screw was just hanging on by maybe three threads. I made doubly sure to apply blue threadlocker. Then I examined the bore and ran a patch through it, checked all the rifle’s functions and weighed the trigger in at 3¾ pounds.

As is my practice when first shooting a freshly mounted scope, I completely covered a target board with a sheet of blank newsprint, stuck a small black target paster in the middle and set it up at 25 yards. The first shot was a couple inches high – expected and certainly manageable – but well out to the right. Hmm…

I cranked two minutes of windage on the elevation knob (recall that they are reversed) and tried again. Shot two landed beside shot number one. I cranked four more minutes on the “elevation” knob. Shot three joined one and two. I spun the bass-akwards windage/elevation knob a complete revolution. Shot four joined the party with his predecessors. Hmm…

There’s something strange going on here

Gibbs rushed me a replacement scope just days before the world’s very first CMP Vintage Military Sniper Rifle test match. Before mounting it I looked through it and saw the reticle crosshairs physically parked way up at 11 o’clock in the tube. A turn of the elevation/windage knob caused it to fall off the scope into my hand. Hmm… 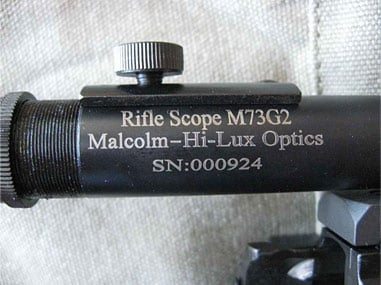 Back to the phone. Sorry, Gibbs said, that was our last scope, we’re receiving many of them bad from the manufacturer. A very long story short, Gibbs solved their scope problem and a new replica M73B1 arrived 17 months later. The replica, called an M73G2 (Generation 2), is a new model from a different company, Malcolm – Hi-Lux. The outward appearance is almost identical to the original; the only detail immediately and obviously differing from the M73B1 is the location of the markings, which are etched on the right rear of the scope tube, rather than on the adjustment knobs’ mounting block. Malcolm – Hi-Lux elected to proudly display their own name, along with “M73G2” and a serial number, rather than try to mimic the markings of an original.

Light transmission is remarkably bright for a ¾-inch tube, I can see no aberration around the lens edge, and the crosshairs are crisp and flawless. I didn’t need to adjust the focusing ring at the eyepiece. There is some parallax at close range, but none at 100 yards and beyond, which TM 9-270 says is normal and acceptable. The 2.5x magnification seems ridiculously modest by today’s sniper standards, but you know what? That’s what they had to work with 70 years ago, and it’s a statement of the capabilities of the snipers back then. The scope’s design makes it impossible to fully seal well, but John Wu at Hi-Lux told me it will stay nitrogen-sealed and therefore fogproof “for a while.”

Back to the range

I mounted the scope and zeroed it with the collimator before taking it to the range. Using Greek surplus M2 Ball ammo, shot number one clipped the edge of the paster at 2 o’clock. Nice. I moved the target board out to 100 yards and stapled on an SR-1 bullseye target. Twelve ½ minute clicks down, three clicks left and I was grouping the surplus ammo inside the X and 10 rings. I didn’t exactly dance around the shooting bench or skip out to retrieve my target, but I was mighty relieved and happy to finally have a working scope. Plus, it looked like the rifle is easily capable of holding the 10 ring with decent ammo. 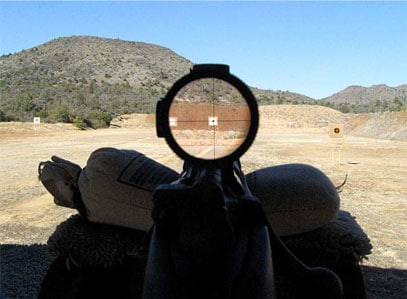 What really pleased me though, was the miniscule windage adjustment at 100 yards. The crooked scope mount presented a real possibility that at 600 yards the scope might not have enough internal windage adjustment to zero, or enough left over to compensate for a stiff crosswind if it did. But it looked like my work with the collimator, scope mount lateral adjusting screws and threadlocker paid off. And so did my patience while Gibbs worked through their scope problem, because the Malcolm – Hi-Lux M73G2 is a quality piece built in the image of its 80-year-old predecessor, but made with 21st Century technical know-how. The windage and elevation clicks are positive and easy but, like on the original, they are very close together, so you have to be mindful and attentive when adjusting. Unlike the original, the clicks are ½ minute, not ¼ minute; Wu said adjustments are 50 MOA in all four directions – about twice that of the M73B1.

The ballpark figure for come-ups (increasing rear sight elevation as distance increases) is about 12 minutes when moving from 300 yards back to 600 yards, the two distances fired in the sniper rifle matches. The M73G2 is in that ballpark, needing nine ½ minutes of come-up with Hornady M1 Garand Match ammo. Best of all, it only needed eight clicks (four minutes) of left windage to zero at 600 yards, and one of those is to compensate for the right hand twist of the rifling.

Now let’s take a closer look at the Gibbs reproduction M1903A4, built on an M1903A3 receiver made by Remington Arms in 1943. The receiver had some minor pitting that has been mostly polished out before the application of new bluing that looks virtually black. Machine marks that are the exigency of wartime production are still there. 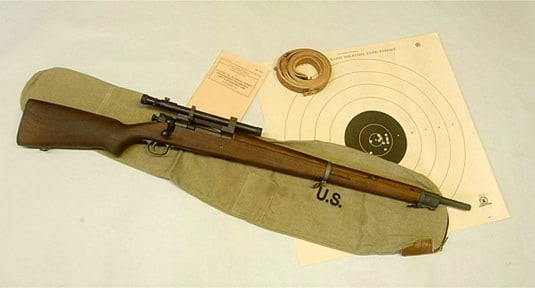 The buttplate got the same black treatment, and is also period correct for 1942 to 1944. Fact is, all Springfields went through armory rebuilding at least once, so a mix of parts from various models and periods on any particular rifle is the norm. Mine has the milled, rather than stamped steel trigger guard/floorplate. Luck of the draw, because of course the milled steel is beefier and more desirable.

The trigger guard/floorplate, barrel bands, sling swivels and scope mount all have the same light grey phosphate (Parkerizing) finish. The barrel and bayonet lug band are a slightly darker grey; all screws but one are blued. Combined with the black receiver and buttplate – and the black of the M73G2 scope tube – there are some interesting contrasts going on.

The new Criterion barrel is cut for a front sight, which is not installed, as was the case with original M1903A4s, and which is required by CMP rules.

The stock is your typical military straight-grained wood with a dull oil finish and without any reproduction period stock markings. As on the original M1903A4, reinforcing bolts pierce the stock laterally behind the barrel lug and in front of the trigger recess. The stock has a cutout to accommodate the bolt handle, which is re-contoured to clear the scope. The wood to metal fit is quite good; bolt throw is slick and the easiest I’ve ever experienced on a military rifle, and the 3¾ pound trigger is within match rules. This 2-3 MOA rifle should compete well with its unaccurized contemporaries.

All in all, despite the off-center scope mount, I give the rifle a thumbs-up. See you at the Western National Championships in October!