“It’s a toy!” Is what I am tempted to say about the Kel Tec Sub-2000. It is small. It is light. It is mostly plastic. And it folds in half. It’s a toy—except it isn’t. No real firearm is, so it’s most definitely NOT a toy. But it is as much fun as about any toy I remember from my childhood.

But it is not what you’d call a “high-end” firearm. The fit and finish are only OK. It wins no points on attractiveness. Accuracy is acceptable, but not much more. It has some operating quirks you have to watch out for. It is prone to annoying (but easy to correct) jams.

But I love this little carbine. Have since I first got one, in 9mm, several years ago.

There are a lot of decent reasons to have a pistol caliber carbine. They are: about 15 percent increased power out of the same ammunition, much better sight radius for increased accuracy, reduced recoil and good ergonomics, and handling the same ammo as your pistol.

With the Sub-2000 you get all of these, plus a gun that seems to be well made for a decent price and that folds in half. Yeah, that’s right: you pull on the trigger guard, and the barrel hinges upwards. It closes on itself, locks in place, and you have a carbine that’ll fit into a pizza box or a laptop bag. When you want to use it, just release the locking mechanism, unfold it, and it snaps solidly back into being a carbine. That’s just cool. 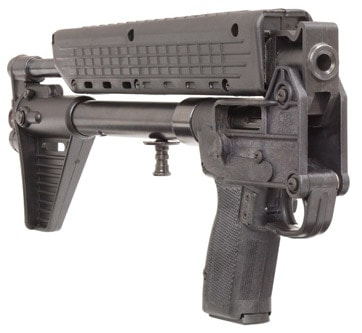 And while the Sub-2000 isn’t a gun made for target shooting, it’ll stay in the black at 50 yards, being shot unsupported. With support, 100 yards isn’t too much for it, either. This is with the standard simple peep sights (front sight is adjustable).

You’re not talking MOA accuracy, but you can easy pop tin cans out to 50 yards when you’re just wanting to have fun.

Operation is easy, and dis-assembly a cinch for cleaning.

What’s not to like? Well, it’s a simple blow-back mechanism, and the charging/operating handle is on the bottom of the stock where it can snag clothing.

Mine does sometimes jam, usually a “failure to eject” spent cases completely, sometimes a “failure to feed” new cartridges. Yet, it’s usually easy to clear such jams with a cycle of the operating handle, but you do have to take a moment to do it.

The Sub-2000 is so short that I added on a stock extension, but it still feels a bit cramped for my long arms. And it can be a bit tough when wearing hearing muffs to get down behind the rear sight well enough to get a good sight picture.

This is not a gun that will impress your friends with its craftsmanship and fine detail. But it is decently made, and works.

A buddy of mine who was the armorer for his PD SWAT team liked shooting mine so much, he got one for himself, and loves it – and this is a guy used to handling and shooting the best of the sub-guns available. I think that says a lot right there.

I love it, even though it’s a bit of a mongrel – not entirely one thing or another. The quality could be a bit better. But I love it. I’d buy another in an instant.