Rock Island 1911A1 Review: Reliable, affordable, but far from pure

Last year, John Browning’s storied handgun reached its 100th anniversary and during its existence the 1911 has become available in a wide variety of styles, from a multitude of makers, and at wildly divergent prices. So why am I talking about the Rock Island 1911? Because out of all of them, Rock Island makes 1911s for the average Joe. On top of that, it’s a good, reliable pistol.

I’ve always been attracted to the nostalgia of the old G.I. A1s of the 1940’s. I like the no-frills, bare bones, baseline G.I. 1911A1. I’m lucky enough to own one, but I’m conflicted about shooting what I consider my own personal museum piece.

So I’ve been hunting for a stand-in. I want a shooter—a gun that doesn’t mind getting dirty. 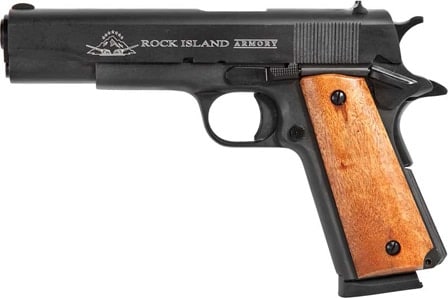 Enter the Rock Island Armory 1911A1. The name itself evokes a sense of nostalgia, though the guns are clearly not the product of the Rock Island Arsenal, or any of the other subcontractors that were making 1911’s during the Second World War. The pistol is an import from the Philippines—a fact most prominently reflected in the price. Around $400.

Yet, the Rock Island A1 strives to replicate many of the old Colt’s iconic features. The gun has a stubby little hammer and a thin beavertail. The pistol is parkerized, like the originals (if in a slightly darker color). Maybe the biggest similarity is that the pistol doesn’t have a firing pin block, so don’t drop it.

The differences are more practical. Lowered ejector port. Beveled magazine well. The barrel has been tweaked so hollow points will feed. While these are really sound ideas, they detract from the pure replication of the A1. But does that matter?

Many corners are cut in the manufacture. The gun has smooth wooden grips. The frame and the slide are cast instead of milled. While cast metal may never have any effect on the performance of the gun, the reliability of Rock Island’s component parts instills tiny seeds of doubt. And that is enough to scare some folks away.

Other differences seem random. The gun has a flat mainspring housing. The A1s were curved slightly. Purists are debating right now which is better and why, though it has more to do with feel. 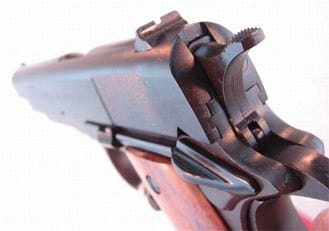 When it comes down to it, the Rock Island 1911 does what it is supposed to do. I have gone through numerous boxes of .45 ACP without a hitch. However, like most guns (or every apparatus for that matter), you’ll notice it slow down after extended use. In this case, the slide slows after awhile as it gunks up with carbon build up.

The sights are also a bit nubby. They are accurate enough at around 10 yards, but anything after that hitting the bull’s eye becomes a bit difficult. And often times I found myself compensating.

However, groups are always consistent at around 1.5 to two inches at 10 yards. It is a 1911 afterall, and recoil is incredibly mild even for beginner shooters.

But if you do buy this gun, please don’t complain about accuracy. True, the gun is built well-enough, but out-of-the-box from the factory, it’s not meant to be a competition model or anything like that. It is what it is.

In the end, the Rock Island 1911’s are all about price. The A1 isn’t a match grade target pistol. I wouldn’t imagine that anyone would ever consider carrying it. But I can’t find much that this gun does that other low-end 1911’s don’t do. A Mil-Spec Springfield will set you back a little more. If you’re flush and want to buy American, look at the Colt’s.

The Rock Island 1911A1 isn’t an heirloom piece. It’s a blue-collar gun and far from pure. But it’s reliable and shoots well. And I’d never be afraid to shoot it. In fact, this is the type of gun you want to shoot until it breaks—just to see how much it can take.

The Rock Island 1911A1 is a pistol that deserves to get dirty. Toss it in the toolbox. Take it on a river trip. If something breaks, try to fix it. And if you screw it up, if you could even manage to wreck it beyond repair, it wouldn’t cost much to replace it.