Gun Review: Rock River Arms LAR-15: It’s how you stand out in a flooded market

How does a company that makes AR-15 platforms stand out in a market that’s flooded with product? They have to improve quality, offer customized options and mark it all at a fair price—sounds like the ideal business model, but no it’s not. It’s Rock River Arms’ business model and today Guns.com reviews the Rock River Arms LAR-15.

I’m not a big AR-geek. Although I’ve shot a few, I didn’t really know much about them until a couple of years ago. However, I always thought they were a good platform, but I was more than a bit intimidated by the myriad options, terms and manufacturers. And if you’ve ever waded into some of the online forums devoted to things-AR, you know just how bewildering it all can be.

But I’m lucky. One of my Ballistics By The Inch buddies is very knowledgeable about ARs. And I know that he also respects my knowledge about other guns, meaning that I didn’t feel like some kind of idiot by asking him to give me a run-down on basic ARs some time back. Well, not any more of an idiot than I usually feel like, I suppose I should say.

Anyway, I was lucky to have someone I could turn to for information. This came in very handy when we decided to go ahead and test the .223 cartridge for BBTI last year. Not only did I get to learn even more about the platform, I got to shoot his Rock River Arms LAR-15 as part of the test sequence.

If you’re already among the AR-cognoscenti then you probably already know general information about Rock River Arms and their line of LAR-15 rifles in particular. But the chances are if you’re in that group, this will be a refresher. For everyone else, then:

Rock River Arms got into making AR-15 rifles back in the late 1990s after years of doing custom work on 1911s. They quickly earned a reputation for making excellent guns and components. In 2003 they got a big government contract to supply the Drug Enforcement Administration with a bunch of AR-15 style guns. And since then, they have continued to be one of the major manufacturers of AR-platform guns and parts.

They’ve managed this because they make excellent guns. And not only are their guns excellent, they’re actually very reasonably priced. Not cheap, but not horribly expensive, either. Certainly not, considering the quality. Depending on exactly what kind of gun you want, with all those myriad options I mentioned, you can spend as little as $900. For a couple hundred more, you can get a gun fitted with extra features, maybe a nicer trigger or barrel or sighting system.

Regardless, you’ll get a gun with a fit and finish better than most AR rifles available on the market right now, even at a significantly higher price. I’m talking no slop, no gaps and excellent quality. Accurate to 1 MOA, or about one-inch at 100 yards. 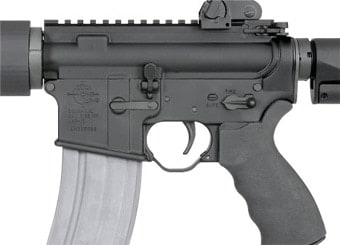 Although the particular model tested for this review was a few years old and had seen plenty of use, it was still as tight as any gun I have shot.

The match grade trigger (what RRA calls their two-stage) was very smooth and crisp. The reset on the trigger was smaller than I expected, so it allowed for very quick follow-up shots. I like the RRA ‘star’ safety selector, which rolls nicely under your thumb (for right-hand shooters).

We were shooting iron sights only and the gun shot better than I can, in terms of accuracy.

Recoil with any AR-style gun is pretty minimal, at least in the .223/5.56 configuration. That’s one of the nice things about the platform. This one was the same.

We didn’t have any problems with the gun operating at all, but I didn’t expect any. As I said, this was a well-used gun and I knew the owner wouldn’t tolerate any problems.

But the Rock River Arms guns have a very solid reputation for reliability. About the only thing someone might complain about is having to wait for a few weeks to get a custom gun they order from RRA.

The company says on their website that most orders for built guns will take 60 to 90 days. And almost all guns are built for a specific order—it is rare that you’ll find a new one for sale someplace.

I am by no means an expert on ARs, but I do know a bit about quality firearms. The RRA LAR-15 is a quality gun, in just about any configuration you can come up with.

If you’re looking for a good, dependable AR at a reasonable price, I don’t think you could go wrong with a Rock River Arms product. Get a fairly basic model as an introduction and rest assured that when you want to geek-out later, you’ll be starting with a quality platform. Or if you already have some idea of the various fancier accessories you might want, you can order it that way to start with, and trust that you’re getting lasting value for your investment.