One of the most common complaints about the AR-15 pattern rifles has been that they aren’t powerful enough. From the very start, the .223/5.56mm round has had its detractors.

Since the overall design of the rifle has been very popular, the solution was obvious: create different uppers to accommodate more powerful cartridges, while making sure that they would work with the rest of the platform. And over the years a number of different options have been offered. The .458 SOCOM is one such.

The .458 SOCOM is on the upper end of the power scale of cartridges designed to work with the AR platform is the .458 SOCOM (from “Special Operations Community” — the origin of the round). Where the typical 5.56 NATO round is a 62-63 grain bullet traveling about 3,000 fps, the .458 SOCOM offers a much heavier bullet — from 250 grains all the way up to 400+ grains — traveling at 1,500 to 2,000 fps. And for special applications, there are even heavier loads — up to 600 grains — that travel at subsonic velocities, so they can be used with a suppressor.

What’s the advantage of going with such a cartridge? A very heavy bullet is less likely to be stopped by thin barriers such as windshields or sheet metal. And even though the bullet is traveling at a much slower speed, it still has a lot more energy — about double what the 5.56 NATO round has. That translates to what is variously called “stopping power” or “knock-down power.” Even the subsonic round hits with about 50 percent more energy than the 5.56 NATO.

A few years ago Rock River Arms added an AR in .458 SOCOM to their line. I recently had a chance to shoot a brand-new one of these rifles, in the A4 carbine configuration. This was a complete Rock River Arms build.

I’ve reviewed a Rock River Arms AR previously and was favorably impressed with the quality and functionality of the gun. The LAR-458 was just what I expected it to be.

Opening the case, we took the gun out of the protective plastic sleeve. While all of us trying the gun are conversant with the AR platform, and have shot Rock River Arms guns previously, we nonetheless actually took a few moments and read through the enclosed owner’s manual and related material. Hey, when shooting something with this much power, I want to make sure I have some idea what I’m in for.

The LAR-458 comes complete from RRA with one standard 30-round .223/5.56 magazine. Actually, it’s not quite standard — it looked like someone had taken a rough file to the front of it and removed about an eighth of an inch of metal. But RRA said in the enclosed information that most standard AR magazines would work without alteration, and this claim is supported by owners online. We were able to put 10 rounds of .458 SOCOM into the magazine without difficulty, but it would probably hold one or two more. 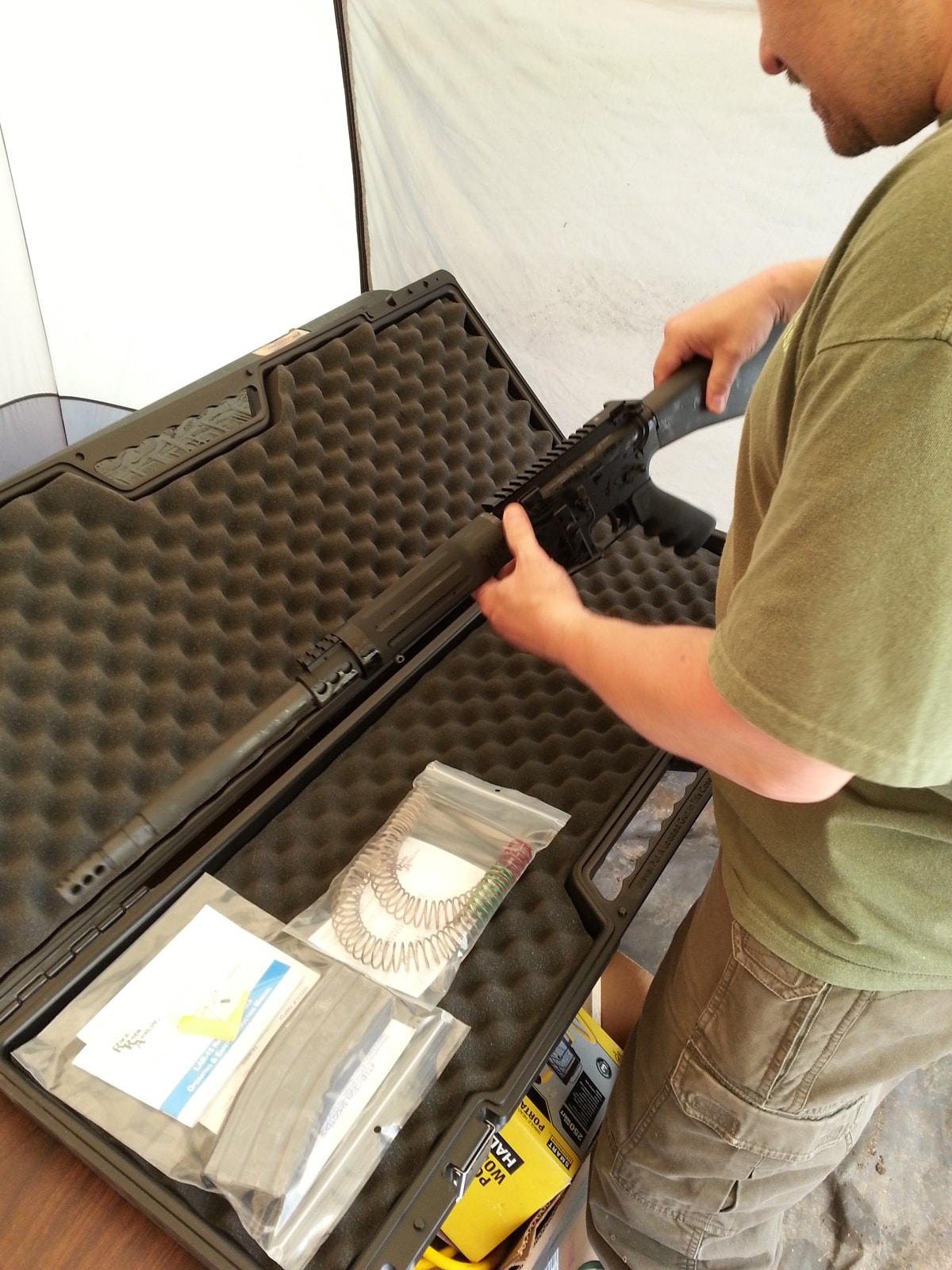 The Ballistics By The Inch team inspecting the Rock River Arms LAR-458 for the first time. (Photo by Jim Downey)

The A4 version of the LAR-458 is a pretty standard AR. It weighs the same. It has the A2 style fixed buttstock, the A2 style flash hider, a 16-inch chrome moly bull barrel, and the A2 style pistol grip. It comes completely ready for you to mount your own optics, which is to say that there’s not even a rudimentary standard sight. Of course, being an AR, you can pretty much customize this gun with a million different options as you see fit. It does come with the two-stage RRA trigger, which I like a lot.

The carbine version does come with a pair of extra recoil springs, one marked red and one green. The green one is a standard spring that’s meant to be used with the A2 stock. The other is a bit shorter, intended for use with a collapsing stock, if you go that route. The assembled gun already had a standard spring in it.

Everything was well fitted, with a nice if functional finish. It’s intended to be a quality, practical gun, not a museum piece. There wasn’t a single small burr or slight gap on the whole gun — exactly what I would expect from a high end company.

This was just a shake-down outing, not a full range test. We didn’t even have any optics to put on the gun. So I won’t pretend that I can give you any kind of an accuracy assessment.

That said, just looking over the top of the sight rail all three of us were able to keep to about 3-inch groups at 15 yards. RRA claims 1.5 MOA at 100 yards, and online reviews seem to back that up. It wouldn’t surprise me if the gun were that accurate right out of the box. And for what it is intended to do, that’s all the accuracy that’s needed.

Which isn’t to say that it is brutal or anything. But you know you’ve shot it. And it is completely different from shooting any AR in .223/5.56 NATO.

This is where simple physics can’t be avoided. When you take a lightweight platform like an AR, and use it to fire a much more powerful cartridge, then you have to deal with increased recoil. Sure, you can mitigate that somewhat with clever springs and buffers, but only to a degree. Were I to get one of these guns, I’d put a substantial recoil pad on the buttstock. 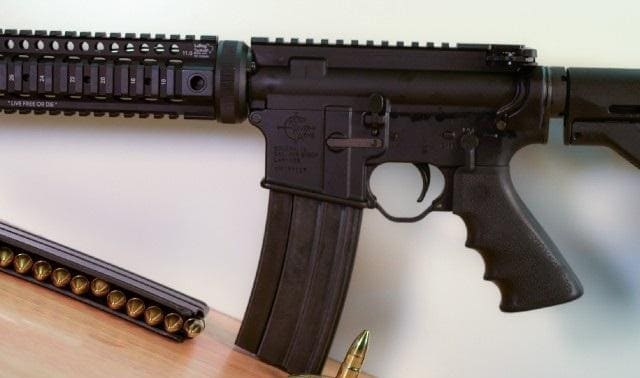 Otherwise, the gun shot solidly and well. We put 40 rounds through it in short order, with no problems or glitches of any sort.

It’s a good gun. Packing the power of something like a modern .45-70 into an AR platform with minimal changes is a nifty little trick. The ballistics of the .458 SOCOM won’t allow you to really stop anything at long ranges, but if you need solid stopping power at less than 200 yards, well this gun would provide enough to take any game in North America without concern. And I can certainly understand how it is well-suited to military or police applications where power rather than range is needed.

The complete A4 configuration of the RRA LAR-458 has a MSRP of $1,220. The same complete upper is MSRP $990. A quick check online suggests that those are in the ballpark of what you should expect to pay.