In theory, the .22 Long Rifle/Magnum version of the Rossi Circuit Judge revolver carbine is a cool little gun. And it certainly looks the part being an almost Steampunk-styled gun, combining a 19th century revolver with the latest in modern “black rifle” components like a synthetic stock, Picatinny rails, and a standard fiber-optic front sight.

Adding a longer barrel and a shoulder stock (either temporary or permanently mounted) was a logical extension of the development of handguns using a revolver design. The additions give you a bit more power — out of the longer barrel — and greater accuracy due to the larger sight radius and more stable ergonomics. Over the years various manufacturers have come out with different versions of these guns.

This is Taurus’s version, built off of their “Judge” series of revolvers. Oh, yeah. Taurus actually owns Rossi. I’m not sure why they decided to issue the gun under the Rossi name, since everyone thinks of the Judge line of guns as being Taurus.

But that’s what they did. And the initial offering of the Circuit Judge was based on the .410/.45 Colt combination used in the Judge. They have subsequently expanded the line, and now offer a version of the Circuit Judge in .44 magnum, 28 gauge (sort of), and in a .22 LR/Magnum convertible.

The Circuit Judge in .22 LR/Magnum is a slick-looking little gun with a number of interesting features. As mentioned, it comes with synthetic stocks, which are tough and nice looking. The front sight is very much high-visibility. And the Picatinny rail system means that this gun is ready to be customized with your extras (lights, optics, small espresso machine) with minimal hassle. And like the other Circuit Judges, it has these little curved ‘wings’ on the sides of the main frame, which shield the shooter from gasses escaping from the cylinder gap — protecting your arm when you reach up to hold the front stock of the gun.

The .22 LR/Magnum change is made in an interesting and nifty way. Usually, when you have a revolver that is convertible between these cartridges, there’s a small release button that allows you to remove the central shaft supporting the cylinder, pulling it out from the front of the frame. Pop out the cylinder for the .22 LR, pop in the magnum one (or vice versa), replace the shaft and you’re good to go.

But since there is a fore stock on the Circuit Judge, they made it so that the whole swing arm (called the ‘crane’) supporting the cylinder comes off as a unit. The process is just as easy and as fast. Everything locks back into place nice and secure. 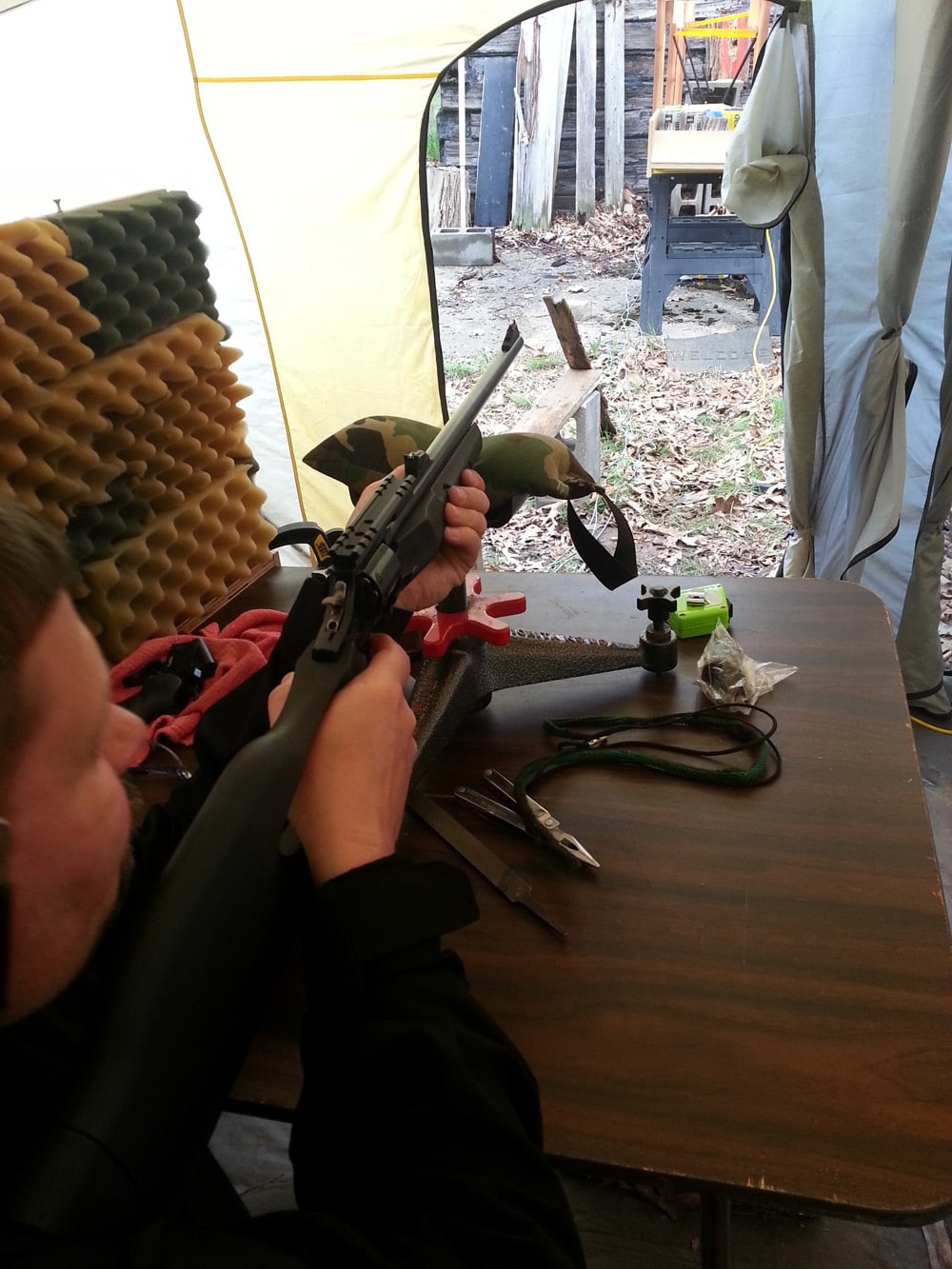 Overall, the fit and finish of the gun is good, but I generally like Rossi and Taurus guns and as per usual it impressed me on first inspection. This gun was brand new and belonged to a friend. Since it hadn’t been shot yet, we gave it a quick once-over to make sure it was safe to shoot, running a Boresnake down the barrel a couple times, and then gave it a try.

We put the magnum cylinder in the gun, since we were using it as part of the Ballistics By The Inch .22 magnum tests. The iron sights on the gun were perfectly fine for the short range shooting, so we didn’t bother mounting any optics on it.

One odd thing I noticed right off the bat is how different it felt to be able to shoot the gun in either single- or double-action mode, just as with any SA/DA revolver. Which is to say, you could either cock the hammer back, and then squeeze the trigger slightly, or you could just leave the hammer down and do a longer pull on the trigger, and it would cock and then fire. This set up on a rifle just felt strange, but in both cases the trigger was decent and not hard to pull. It broke at about 5 pounds.

The small deflectors for the escaping gas from the cylinder gap worked just fine. Even shooting the gun in short sleeves, I felt nothing from the gas.

Accuracy was fine, but as noted we were only shooting a very short distance.

All in all, it shot just fine. But shooting it wasn’t the problem.

But there was one…

Like I said, we had this gun as part of the BBTI .22 mag tests. And from the first shot, there was something very wrong: the speed of the bullets coming out of the barrel. It was MUCH lower than it should have been. Like about half. 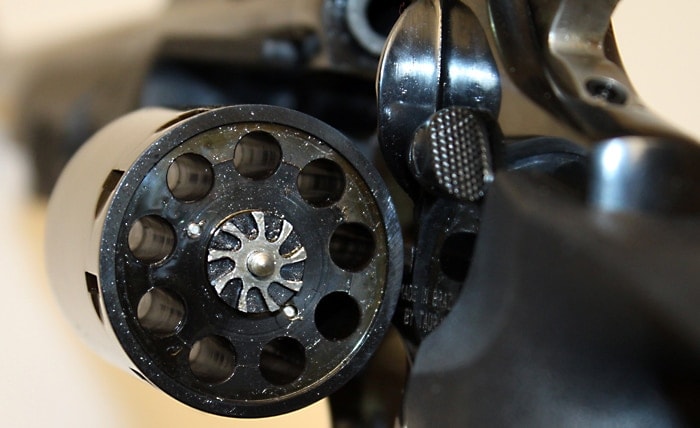 An open .22-caliber cylinder capable of holding nine rounds, or however many’s there. (Photo credit: GunBroker.com)

At first, we figured it must’ve been a glitch with the chronos. This can happen, getting bad readings for one reason or another. We rebooted the chronos, tried it again.

Same thing. Next we thought, “Maybe some bad ammo?” Well, we had 13 different loads we were testing, so we swapped out and tried another one. Same results — barely more than half the velocity expected.

We actually got another rifle we had there for the tests, loaded it with the same ammo and shot it. That gave us good readings in line with what we had tested with that gun previously.

It was huge. Like the sort of forcing cone you’d expect to see on a .38 or something. Huge. Seriously, I could shove the end of my pinkie finger down inside the thing — something I should NOT be able to do on a .22 of any variety.

We went ahead and tested all the ammo through the Circuit Judge and recorded the data. It’s all on the BBTI site and you can go look for yourself, and what you’ll see is that the Circuit Judge got numbers very similar to my little Heritage SAA with a 4.625-inch barrel. 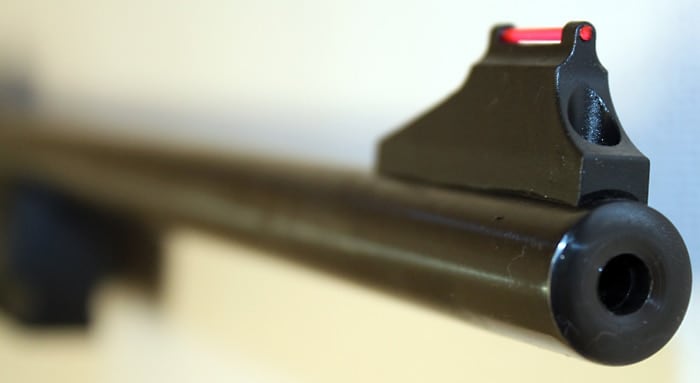 The business end of the Rossi Circuit Judge with a fiber-optic front sight up top. (Photo credit: GunBroker.com)

When I got home I spent a bit of time online, checking to see if others had reported this problem, or whether it was just some one-off glitch with the particular gun we had. And I found several other reports of people finding the exact same problem, overly large forcing cones, with their Circuit Judges.

Why? I have no idea and I won’t speculate. But the effect was very clear: A massive loss of power. This is caused probably because the expanding gasses from the fired cartridge are able to just blast around the bullet while it is rattling around in the huge forcing cone.

I think this is a nice looking little gun. I like the different features it has. At about $500 retail, it’s not even terribly expensive. And overall it seems to be well made.

And if you don’t mind that you’re only getting about 50 percent of the power out of your cartridges that you should, then sure, go ahead and pick one up. Me, I’ll pass.