Lever action rifles have played a crucial role in American history because they tend to allow for quick follow-up shots, have decent accuracy, and, in general, they’re a whole lot of fun to shoot. Consequently, many favor the action for hunting, especially during deer season.

However, the rifles we immediately think of when we think lever-action – like Marlin and Winchester — while nice, brand new ones tend to be expensive.

So how does a budget lever action rifle like the Rossi Rio Grande fare in this category?

Rossi, a family owned business from Brazil, has been manufacturing firearms for more than 100 years. Currently Rossi guns are imported by BrazTech, which include Rossi’s line of handguns produced by Taurus, and have been available in the U.S. for a number of years.

The new Rossi’s are designed with a safety that keeps the hammer from hitting the firing pin if the trigger is pulled.  In other words, with the safety on the hammer will still drop when the trigger is pulled, but it won’t go bang. This is very similar to Marlin’s cross bolt safety.  Some people like this type of safety, while others hate it.

Speaking of Marlin, the Rio Grande is awfully similar to the Marlin 336 (some might even go so far and say it’s a clone). While I didn’t compare the internals, its function and externally appearance were nearly identical.  The most important part of the design is that it ejects from the side instead of the top.  This of course makes the mounting of optics a lot easier.

The rifle Rossi sent for review is chambered in .30-30.  The fit and finish is good but not great.  There are a few marks left on the receiver that was not polished out and the bluing was scratched around a screw head. The matte finish on the stock is nice and the overall quality of the blued finish is good. The rifle is light—about 6.5 pounds. It holds 6 rounds plus one in the chamber.  In my opinion the fit and finish is in line for the price point of the rifle.  The street price is around $400.

I had a few issues when loading the Rio Grande like when I pushed the round all the way in, the loading gate would hit the case rim when I tried to load another round.  This didn’t jam the rifle up, but it took a lot of pressure to get the gate to slide past the round in the magazine.  I’m not sure if the shell stop was not holding the round back or if the gate was slightly over sized.  Either way it was a pain.  The solution was simple: I didn’t push the rounds all the way in and used the next one to clear the gate.

The action on the Rossi was pretty stiff for the first 20 or so rounds out of the box, but it did get better.  Some rounds were hard to extract and it didn’t seem to be specific to a particular brand of ammunition.  Otherwise, I had no failures to feed or extract.

Overall the rifle functioned as it was designed to, but was a little stiffer than I prefer.  Of course it could all be smoothed out with some gunsmith work.

The trigger is really nice—it’s the best thing about the rifle actually.  It breaks cleanly at 4 pounds with no detectable creep.

When I tested this rifle at the range I wanted to take my shots like I was hunting – I didn’t use a bench and didn’t go prone.  All of the shots were fired from either standing or kneeling positions, but I did use a shooting stick for the 100-yard shots, which is something that I sometimes carry in the woods during a hunt.

Even though the rifle came with a Weaver style scope mount pre-installed, I didn’t mount a scope. Instead I chose to use the open sights.  The reason is I typically use a .30-30 lever gun for hunting in wooded areas where a shot over 100 yards would be rare, so I prefer to use iron sights in these conditions to avoid any extra weight. 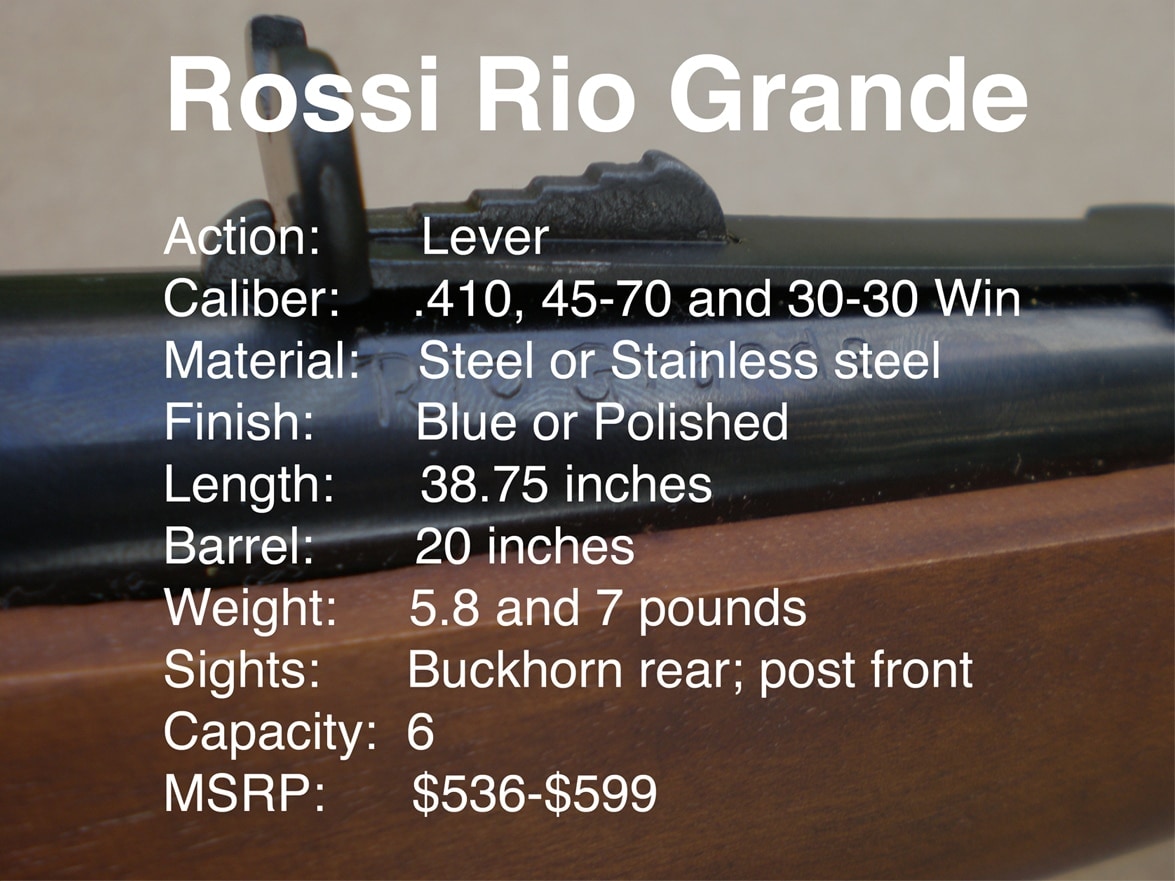 Honestly, all of the ammo tested preformed about the same at 25 and 50 yards.  The groups were all less than 2 inches from those distances and were about 3 inches high and 4 inches to the left of point of aim.  I adjusted the sights and was able to walk the groups into the center of the target.  When I lowered the rear sight I had to remove the scope mount in order to see the bottom of the sight, which took about 3 minutes and a screwdriver.

It was at 100 yards that the ammo really started to make a difference.  I will say that all shot at minute-of-deer.

The Hornady had the tightest groups at 3.5 inches.  While the Winchester and Remington was about 4 inches and the Monarch opened up to 5 inches.  However, it was fairly windy at the range, with gusts around 15 mph, but I’m confident that from a bench the groups would all tighten up.

Lever-action rifles are some of the most iconic firearms in history and even though it’s not made in the U.S. (though, it is made in the Americas), Rossi pays homage to that tradition with the Rio Grande.

For the price, the Rossi Rio Grande is a nice rifle and would make a good deer gun. Although the Rossi Rio Grande’s action was a little rough out of the box and there was the loading gate issue, overall it shot well and functioned reliably. And there shouldn’t be any problem putting a buck with it at 100 yards or so with the open sights. MSRP ranges from $499 to $600 depending on caliber and features.