If you’ve read any of my past reviews, you’ll know that I like Ruger’s guns.  They’re extremely generous with their testing policies, so I get to shoot a lot of their products.  I haven’t shot a Ruger yet that didn’t meet my expectations and no one does rimfire better.  There may be individual products out there that outperform a specific Ruger gun, but Ruger understands the value of the most utilitarian of all chamberings and offers more .22 guns than any other company.

I own a Mark III – it is my favorite .22 LR pistol.  It is as functional as many .22 rifles. I decided on my Mark III after shooting many different .22 pistols.  Second place on my list was the Ruger 22/45.  I often carry a 1911 (something else Ruger does well) and I like that the 22/45’s controls mirror that of my .45.  But the gun didn’t feel as solid as my Mark III—a gun with more weight and a much longer barrel. 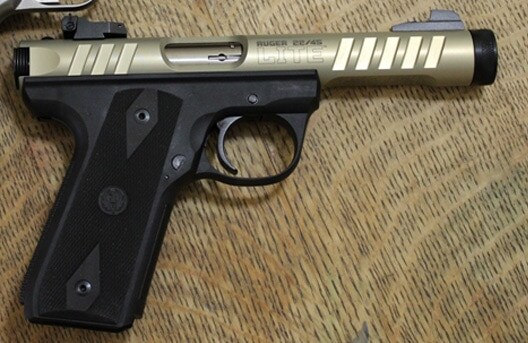 But that’s not a criticism of the 22/45—just personal preference.  And now Ruger has shaved a few ounces more from the already light gun bringing you the Ruger 22/45 Lite.

If I were considering a new .22 auto today, the Ruger 22/45 Lite might be it.  I like how this gun feels.  The Lite aspect makes it more attractive to anyone who would want a full sized .22 LR pistol for backpacking, which I do a lot of.  And the slight reduction in weight gives the Lite a nice balance.

But there is something else, which is less common in the Mark III line—a threaded barrel.  Ruger offers one other 22/45 with a threaded barrel, but it has rails and no iron sights.  I really like shooting pistols with iron sights, so the choice for me is an easy one.  The Ruger 22/45 Lite is lighter, has a threaded barrel, comes with nice iron sights and is drilled for the addition of a rail too.

The sights on the 22/45 Lite are high enough that they are visible over a silencer.  A nice touch.

The best results were with the CCI Green Tags, however, .22 LR is hard to judge.  The ammunition, all but the best (and even some of that), is prone to wander.  Random fliers are more common in rimfire shooting than they are in centerfire, so I have to assume that the performance of the 22/45 has more to do with the performance of the ammunition, or the shooter than the gun.  Probably the shooter.

Here are the results. At 25 feet, the groups are tight.  I shot ten rounds, five shots each and the average came in about 1.7 inches.  From 25 yards it widened out a bit, the average was 2.5 inches.

After shooting it all day, I would like to change out the front blade sight.  That is the only criticism.  It is wide.  I was shooting at a gong at 75 yards, and the front blade almost covered the gong.  But it was good enough to hit it.

And now for something completely different

I mentioned the threaded barrel.  I couldn’t let the opportunity pass to try out a silencer.  That is why barrels are threaded.

Silencerco’s Sparrow is thinner than I would have thought, but very effective.  With subsonic ammo, the report is more like a complex clap than a pistol shot.  There is a sound from the gun shot and the sound from the 22/45’s slide.  The sound is louder than what you’d hear in an action movie, but not loud at all. 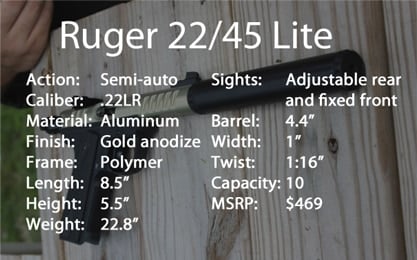 I’m not wild about two-tone guns and never have been.  If I were to balk at any aspect of the 22/45 Lite, it would be the odd champagne color (officially called “gold anodized”).  And the gun has some heavily textured slats cut into the frame. I’m unsure if this was meant to cut down on the weight, or mimic the heavy texture on many 1911 slides, but they add to the wild look of this pistol.

I don’t swoon over this gun like I do the Ruger 1911.  So be it.  I can get over it because it does what it does so well.  But there is an actual downside to the design and it must be discussed.

Youtube videos help.  There are many—each highlighting the importance of the position of the hammer strut.  If that tiny piece of metal, which is not easy to see, isn’t lined up right, the reassembled pistol won’t fire.  But the tutorials will also make you spit fire.  Some of these guys have 22/45s that go back together like they’re made out of Legos. 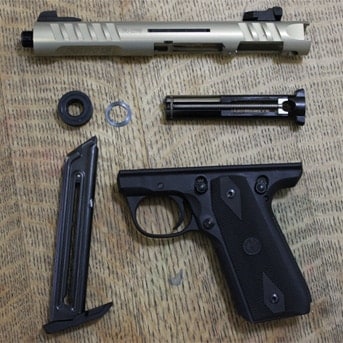 I had everything lined up correctly but I couldn’t get the takedown pin, the first step, back into position.  In the end, I made it work by applying brute force, inserting the magazine, pulling the trigger, removing the magazine, and applying more brute force.  It helps if you hold your tongue in the perfect position and swear a lot.

This one gun was so tight that I would have stopped and sent it back to Ruger in pieces if I had already shot it.  I would have mailed the gun back anyhow and said to-hell-with-the-review if the 22/45 wasn’t a Ruger.

But it is a Ruger, and I figured I would have a hard time breaking it.  And I didn’t.  It eventually went back together and it works fine.  And it will only get easier, I’m sure, as I practice and the parts get broken in.